Pittsburgh Shooting Reminds Us Why We Must Talk About Hate

A shooting at a Pittsburgh, Pennsylvania, synagogue has left 11 people dead. Although we’ve witnessed hate-fueled moments many times before, that doesn’t mean we shouldn’t talk about them when they occur. If we don’t, it means we’ve normalized them.
Adrienne van der Valk
Bookmarked 19 times
Add to a Learning Plan
X
Add to an Existing Learning Plan
START A NEW LEARNING PLAN
Print

It’s been a week filled with hateful violence in the United States of America.

Maurice Stallard and Vickie Lee Jones, both African Americans, were shot and killed at a Kentucky grocery store by an alleged gunman motivated by racial hatred.

For days in a row, high-profile Democratic leaders and other politically outspoken Americans received pipe bombs in the mail. The suspect is reported to be a right-wing extremist terrorist.

And then, today, news broke of a premeditated shooting at a Pittsburgh, Pennsylvania, synagogue that left 11 people dead. The man believed to be the killer is a known anti-Semite.

These attacks were committed by men with hatred in their hearts. And, although such moments can feel confusing and out of control, there is a time-tested model we can rely on to help contextualize these events.

It’s one we hope you’ll share with your students on Monday: the Anti-Defamation League’s Pyramid of Hate. 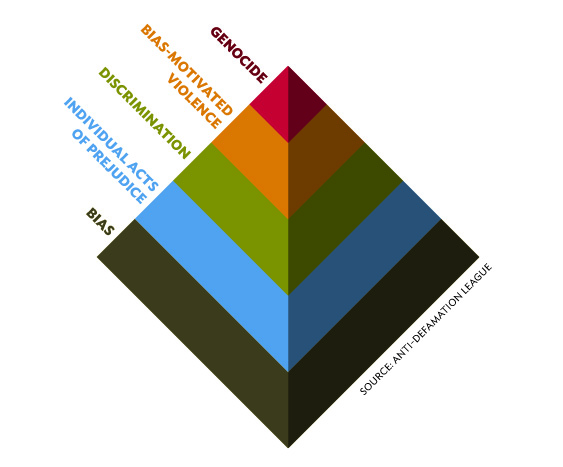 The Pyramid of Hate

The Pyramid shows biased behaviors, growing in complexity from the bottom to the top. Although the behaviors at each level negatively impact individuals and groups, as one moves up the pyramid, the behaviors have more life-threatening consequences. Like a pyramid, the upper levels are supported by the lower levels. If people or institutions treat behaviors on the lower levels as being acceptable or “normal,” it results in the behaviors at the next level becoming more accepted. In response to the questions of the world community about where the hate of genocide comes from, the Pyramid of Hate demonstrates that the hate of genocide is built upon the acceptance of behaviors described in the lower levels of the pyramid. (source: adl.org)

We’ve witnessed these hate-fueled moments so many times before, but that doesn’t mean we shouldn’t talk about them when they happen. Because when we don’t, we show our students that what’s happening is unremarkable.

We’ve normalized the next level of the pyramid. And what then?

In your class on Monday, talk about what happened in Pittsburgh. Show your students the pyramid, and use these resources to teach about the realities of anti-Semitism:

But don’t stop there.

Remember that, on Friday, Matthew Shepard was laid to rest at Washington National Cathedral, 20 years after he was murdered for being gay. His name lives on in many ways, not the least of which is the Matthew Shepard and James Byrd Jr. Hate Crimes Prevention Act. That law also honors Byrd, a black man whose brutal murder received far less attention. The Act is now almost 10 years old, and yet the events of this week make it crystal clear that we are not doing enough to keep our country from moving to the next level of the pyramid.

Hatred this powerful can’t be stopped by a law, or by refusing to talk about identity, or by limiting our discussions of race, religion and sexual orientation to the home. Our children need to hear messages of acceptance, love and pluralism in every arena of their lives. To ignore these acts of violence is to accept them—a message no one living in this country can afford to send.

van der Valk is the deputy director for Teaching Tolerance.

Login to join the conversation
We must now go beyond tolerance. We must take care of each other, always.
Related Resources
film kit
Bookmark This PageSave

This Oscar-winning documentary presents Gerda Weissmann Klein’s account of surviving the Holocaust as a child. (Available for streaming only)
article
Bookmark This PageSave

Charlottesville Roundup: Lessons to Use in Your Classroom Today

In response to the recent events in Charlottesville, Teaching Tolerance teamed up with several organizations to support educators as they return to the classroom. The result was a powerful webinar and this collection of resources.
Learning for Justice Staff
text
Bookmark This PageSave

Remarks by the President at Reception Commemorating the Enactment of the Matthew Shepard and James Byrd, Jr., Hate Crimes Prevention Act

In this speech, President Obama celebrates legislation that provides legal protection from crimes based on gender, disability, gender identity, or sexual orientation. In his remarks, Obama looks forward to further legislation that helps “the bells of freedom ring out a little louder.”
publication
Bookmark This PageSave

Responding to Hate and Bias at School

Find suggestions for preventing and navigating a bias- or hate-related crisis in our guide. It is designed primarily for school administrators, but teachers, staff, counselors and students also may find guidance here.
Bookmark This PageSave