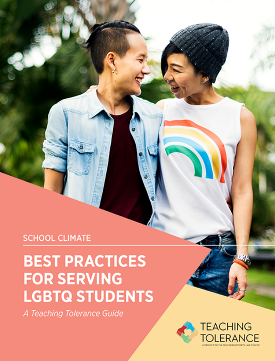 How well is your school meeting the needs of your LGBTQ students?

[ ] Gender-inclusive language is used on all event communications, including invitations.

[ ] Event organizers are educated about students’ First Amendment right to attend events with a date other than a student of the opposite sex and to wear clothing of their choice.

[ ] At least one member of the prom committee is designated the “inclusivity planner” to ensure that every student feels welcome.

[ ] School staff are never asked or required to reveal a students’ sexual orientation or gender identity without the student’s permission—even to the student’s family.

[ ] The policy gives examples of harassment based on actual or perceived sexual orientation and gender identity.

[ ] The effectiveness of my school’s anti-bullying program is evaluated annually using student and staff surveys.

[ ] Administrative forms and communications use gender-neutral language (singular "they," not “he or she”) and provide an opportunity for students to communicate their gender identity. Updates are made as needed.

[ ] The name and contact information for my school’s anti-bullying coordinator is posted in the office, on my school’s website and in the student handbook.

[ ] My school communicates effectively and often with students, parents or guardians and the community about school climate issues such as bullying.

[ ] Staff ensure that reactions to reports of harassment do not further stigmatize students who were targeted for their real or perceived LGBTQ identities.

[ ] Teachers and administrators are educated about common bullying myths, such as the idea that LGBTQ students are “asking for it” by expressing their sexual orientations or gender identities.

[ ] My school’s dress code is inclusive of a diversity of gender expressions, including for yearbook photos.

[ ] My school has gender-neutral restrooms or single stall bathrooms and private changing areas.

[ ] Students can use bathrooms and locker rooms that correspond with their gender identity.

[ ] My school has a GSA that combats bullying and harassment.

[ ] Within my school culture, other staff members are unafraid to be allies to LGBTQ and gender nonconforming students.

[ ] LGBTQ educators and staff members feel safe to be “out” at work.

[ ] My school offers public praise or formal rewards for school staff members who promote a safe and inclusive environment—for example: an “equity leader” certificate at the end of the year.

[ ] My school’s health and sexuality education is inclusive of all sexual orientations and gender identities. The curriculum does not take a heteronormative stance toward sexuality and gender (i.e., assuming students only need to know about heterosexual feelings and safe-sex practices.)