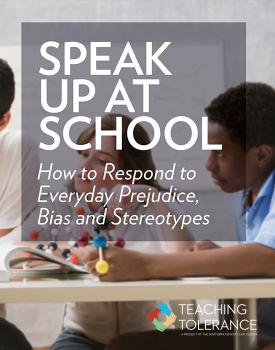 Educators from all grade levels and all parts of the country emphasize this point: You must speak up against every biased remark, every time it happens. Letting one go, then speaking up against the next one, sends an inconsistent message: that sometimes bias is ok; other times it isn’t. Letting the first instance go without comment also sends the message to anyone within earshot that it’s ok to say bigoted things.

So interrupt it. Every time. In the moment. Without exception.

So if Galaviz is teaching a math lesson and she hears a student make a biased remark, what does she do? “I say to myself, ‘Hold on, let’s stop.’ The parallelogram lesson can wait. And I go back to all the work we did the first two months of school, discussing classroom culture and sharing our own cultural stories. I address it in the moment. I never let it pass. Anytime you let it pass, it’s an opportunity missed.”

Usually, such moments have stopped happening by mid-year or earlier, based on that early work, Galaviz says. But once, many years ago, well into the second half of the school year, a student casually used the n-word in class. “I went ‘Errrrrrh. Hold on a second.’ I tempered my own response, so I wasn’t angry or out of control. And I asked why in the world he would say such a thing.”

In the end, Galaviz worked lunch hours and after school with the student, having him write what turned out to be a 15-page paper on the origin and history of the n-word. It was a lesson the student didn’t forget. When he was in high school, he came back and thanked Galaviz for teaching him the negative power and ugly history of that word.

These moments are rare, Galaviz says. But early, firm intervention sends the message that bias will not be tolerated.

Nancy Brakke, a music educator in Tacoma, Washington, admires and encourages these “instant” responses. “No anger, no recriminations, no lecture—just a calm, straightforward ‘stop,’” she says.

Connecticut teacher Christine Sipes describes just such a moment: “I was a new teacher on lunch duty, and a veteran teacher came up to me and said, ‘Have you heard the one about the Italian and the …?’ I immediately said, “I don’t like ethnic jokes.’”

This may not stop every so-called joke; the person still may tell such “jokes” to others. But it begins to marginalize the behavior. The more often it is interrupted, the more likely it will be curtailed.

As mentioned in the opening chapter, asking simple, exploratory questions in response to bigoted remarks can be a powerful tool: “Why do you say that?” “What do you mean?” “Tell me more.”

Galaviz, the fifth-grade teacher, also serves as an adjunct faculty member at Boise State University. One of her students, preparing to begin student teaching, said to Galaviz, “You can tell kids whose families don’t have an education.”

As it turns out, Galaviz, who has multiple degrees and solid educational credentials, grew up in a lower-middle class family, the daughter of parents who had to drop out of school to begin working. She didn’t immediately challenge her student’s comment. Instead, she said, “Tell me more. Tell me what you mean by that.”

She says that approach accomplished two things. One, it led the speaker to encounter his own blind spots or bits of ignorance, as she teased out the reasons behind his thinking. Two, it helped her better understand his thinking and gave her more time to frame and tailor her response.

Tone matters in these moments. Your goal is to understand the roots of the speaker’s prejudices, then help add context and information to dispel them.

Don’t think for a moment that we all don’t have some sort of prejudices. “I call them the ‘uglies,’ and we have to acknowledge the uglies within ourselves if we’re ever going to make lasting change,” Galaviz says.

Amber Makaiau is an ethnic studies teacher at Kailua High School in Oahu, Hawaii. She recalls a moment when she faced the “uglies” in front of her students.

Makaiau periodically checks in with students about classroom culture—what’s working, what’s not working, any issues to discuss. During one of these check-ins, a student asked Makaiau why she pushed the Filipino students to talk more during classroom discussions but did not similarly push the white students.

“I said, ‘Hmmmm,’ and it surprised me. They had a good point,” Makaiau says. “They got to see me work through this surprising realization right in front of them, and I was able to change my behavior accordingly. Teachers need to be open to that. We are there to learn as much as the students are.”

Hate isn’t behind all hateful speech. Sometimes ignorance is at work, or lack of exposure to diverse populations. Other times, people simply don’t know the negative power behind certain words or phrases. So a good first step in a moment of bias—particularly if it’s the first time you’ve encountered it with someone—is to explain why the term or phrase is offensive.

So if someone says, “That’s so lame” or calls someone a “bitch,” not knowing the discriminatory or sexist power behind these words, you can offer background and context to encourage the person to choose a different expression.

Barbara Hemann, an Iowa teacher who has multiple sclerosis, shares this example:

My most obvious symptom is my foot dragging as I walk, creating a limp. A student once said to me, ‘What’s with the gimp?’

I don’t think the student meant to be disparaging in any way, so I sat down and told him that although I was not hurt by his comment, that many people who have a disability would be, and that he should always be respectful and use respectful language if he was going to ask someone about a disability. I told him that I welcomed questions, and I would always take time to answer those questions.

I think the student left with a lifetime skill.

So unless you are dealing with a longstanding pattern of behavior, give the speaker the benefit of the doubt, and allow that person to make a change. “Be kind,” Hemann says. “Nearly everyone is fighting a great battle.”

So unless you are dealing with a longstanding pattern of behavior, give the speaker the benefit of the doubt, and allow that person to make a change. “Be kind,” Hemann says. “Nearly everyone is fighting a great battle.”

It is not your “job” to educate everyone else about bias. People do need to take responsibility for their own ignorance. Self-education— the realization that one lacks knowledge on a subject and will seek it out on one’s own—is vital.

That said, you are in a school, and education happens in schools. So it’s a natural fit to wrap education around moments of bias or stereotyping.

Consider this moment, shared by Vanessa D’Egidio, a second-grade teacher in New York City: A group of second-grade girls was overheard on the playground, laughing and making negative comments about classmates’ clothing. They found fault with clothing that wasn’t name brand and laughed at others whose clothes were faded and frayed.

“Another teacher pulled the group aside to discuss what she overheard, explaining to the students that what they were doing was teasing, bullying and very hurtful toward their peers, regardless of whether it was to their faces or behind their backs,” D’Egidio says.

Afterward, the second-grade teaching team collectively decided to follow up with a community meeting of all second-graders.

“During the meeting, we did not single out the students who had done the teasing, but we brought up the issue of teasing someone about their clothing or something else about them through gossiping,” D’Egidio says.

Teachers role-played different scenarios, showing how gossip can be hurtful. Then they asked students for examples of more considerate behavior.

“The teachers reminded students that words can hurt, whether they are used in private, overheard or said directly to someone,” D’Egidio says. “We also highlighted the importance of being an ally, the importance of speaking up against teasing, and the importance of everyone working together in a community to create a safe, caring space for all.”

It’s powerful to be the first voice that interrupts bias. It’s also powerful on another level to be the second, third or fourth voice to join in the interruption. In group settings, if someone has said something biased, and not one but four people speak up, the echoing power of those voices can have a multiplying effect.

As the echoing voice, you can reiterate the anti-bias message or you can thank the first person for speaking up—or both!

Consider this, from a high school teacher working with ninth-graders:

I overheard a side conversation where a student said, ‘That’s so gay.’ I was shocked. I thought that phrase was rarely used. (Maybe I just wasn’t aware.) Immediately, another girl in the group said that was a wrong thing to say. The first girl giggled and said she was just being funny. The second girl said it’s not funny because it hurts people. I was impressed, so I jumped into the conversation. I told her, ‘Thank you. I have a lot of respect for you speaking up like that, and I totally agree with you.’