How Do States Compare to Each Other?

Bookmark How Do States Compare to Each Other?
SHARE
Publication PDF
Teaching the Movement | 2014
Topic
Race & Ethnicity Rights & Activism

Teaching the Movement 2014
How Do States Compare to Each Other?

There is considerable variation in the guidance that states offer for teaching the civil rights movement. The average score across all states and the District of Columbia was 33 percent for an average grade of D. Using a different and much more restrictive methodology in 2011, the average score was 19 percent. This is not much of an increase, considering the expansive and more nuanced method used in the present study. A majority of states earned a grade of D or below, with 20 earning a grade of F.

Table 3 compares the 2011 and 2014 scores by state. It is important to remember that this table represents two different methods of evaluation: the narrower 2011 focus and the more expansive 2014 focus. The average change was an increase of 17 percentage points. Several states saw large changes from the 2011 ratings. Because of its new standards and outstanding supporting resources, North Carolina’s score increased by 71 percentage points. Oklahoma’s score increased by 66 percentage points—that state’s new C3 Standards are among the best in the nation for covering the civil rights movement. Other states, such as Louisiana, California, Maryland and Kansas, saw big increases due to their exceptional supporting resources. Some local-control states, such as Delaware, Pennsylvania and Utah, rose to a passing grade based solely on the quality of their supporting resources. Six states saw no change in their score, while four (Florida, Nevada, Texas and Illinois) saw a decrease.

Because we separated states’ major documents from their supporting resources, we were able to look a little deeper into the nature of state support for teaching the civil rights movement. Table 4 ranks the states based only on their major documents. The list shows a wide range, including the 12 states that scored a zero in every category used to evaluate state standards and frameworks. The rankings illuminate the way that our new methodology captured the differences among states. For example, Georgia and California scored only a 2 in the essential content category, but because their major documents’ narrative approach managed to capture broad elements of the movement, they scored high overall. Indiana, on the other hand, scored a 2 for essential content, but scored lower overall because its major documents contained content but little nuance.

Looking at the supporting resources allowed us to capture an astonishingly broad snapshot of the ways states, schools and districts are teaching the civil rights movement. Resources ranged from official state guidance documents to individual lesson plans submitted by teachers and posted on state websites. Table 5 shows the rankings of states when we looked only at their supporting resources. Six states scored perfect marks for supporting resources. These states offer materials that any social studies teacher would find useful for the classroom, regardless of grade level. Twenty states did not score a single point in this part of our assessment. Not all of these states are local-control states; they include both states that offer no resources for teaching any era of American history as well as states whose offerings happen not to include the civil rights movement.

Many teachers would never think to check the websites of other states’ departments of education for resources, but our search has revealed a wealth of documents, lesson plans and links to original historical documents for teaching the civil rights movement. This is one of the major advantages of the 2014 report over its predecessor. We are now able to identify outstanding state resources to support teaching the movement—resources that might not otherwise cross the desk of the average, busy social studies teacher. Table 6 identifies nine notable state resource banks for teaching the movement, annotated to guide teachers and school leaders. Table 7 identifies other sites with exceptional resources for teachers. 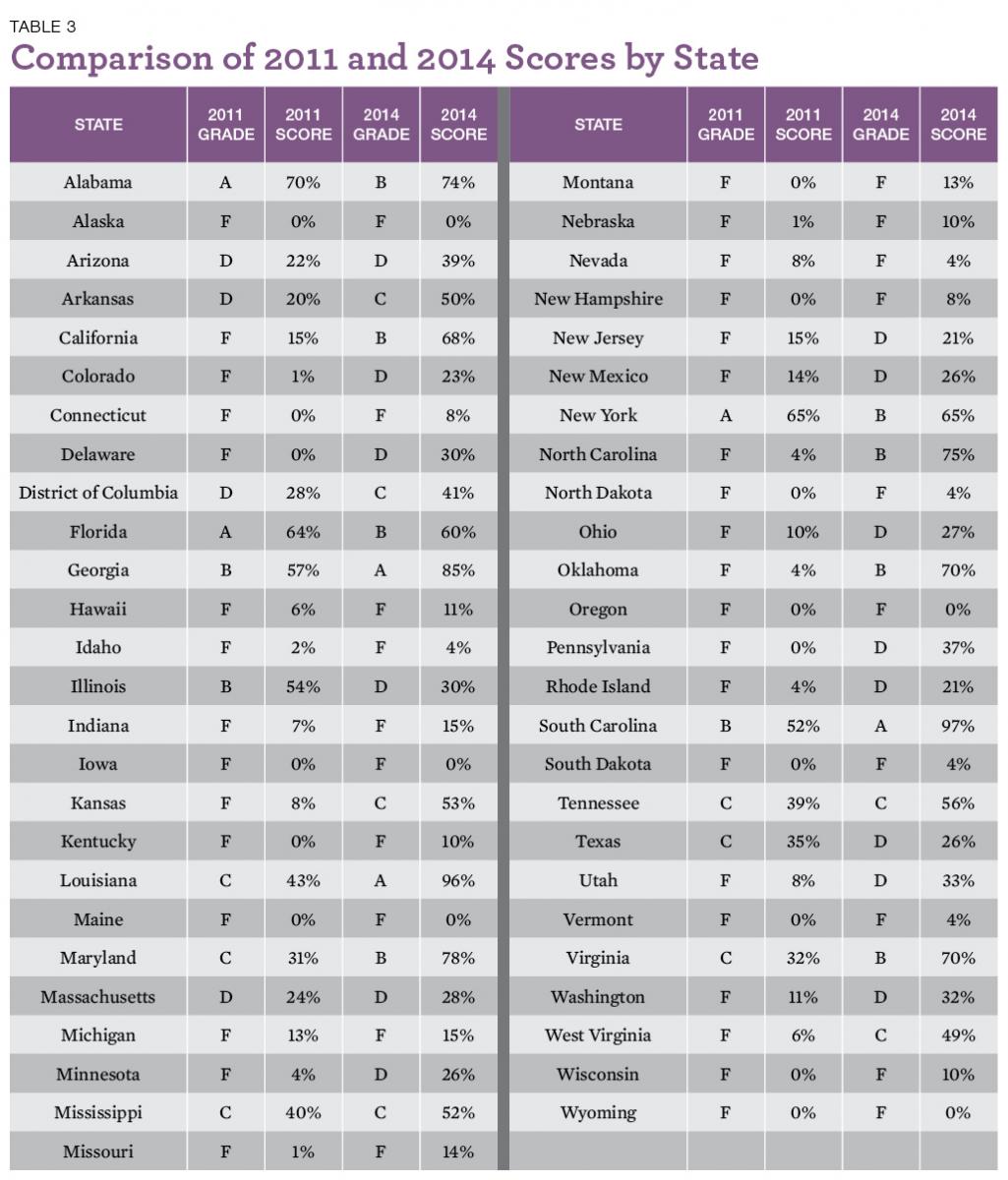 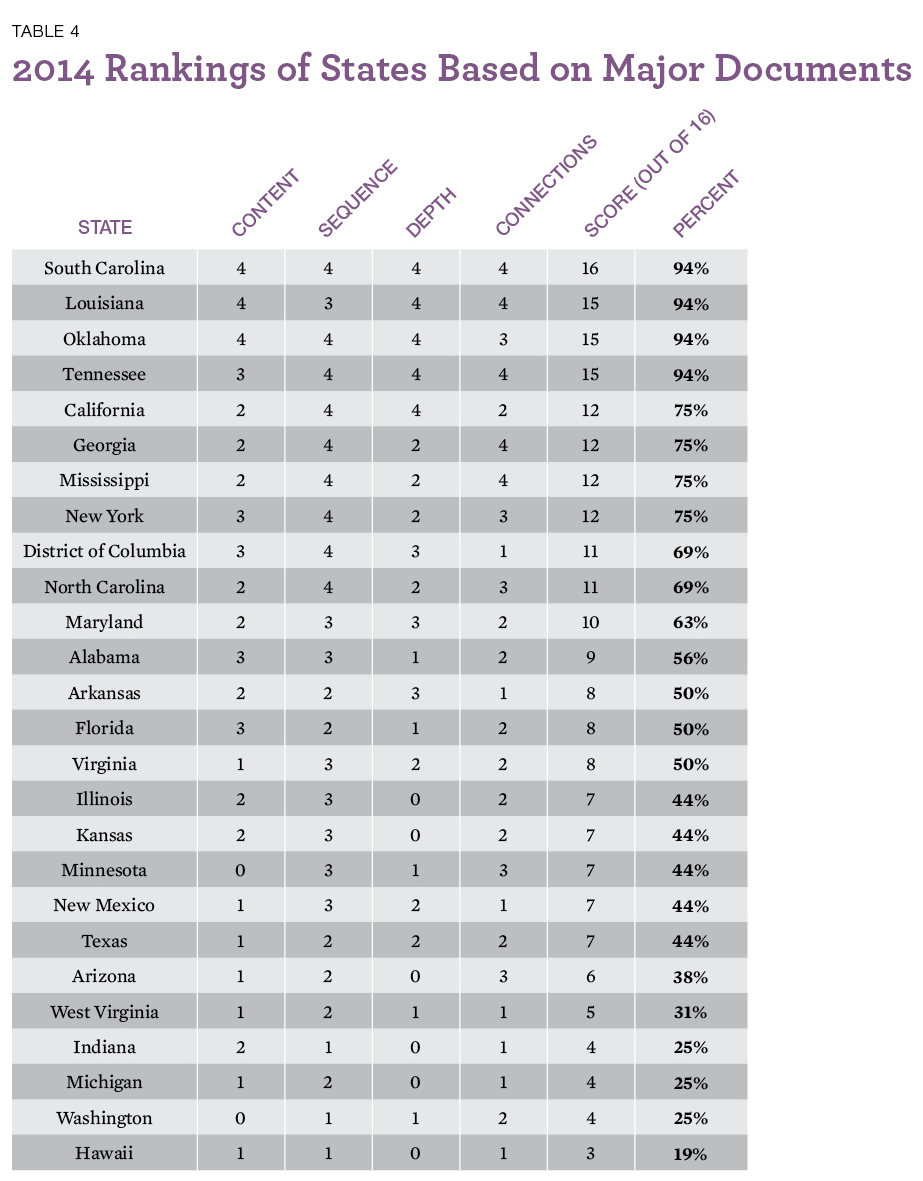 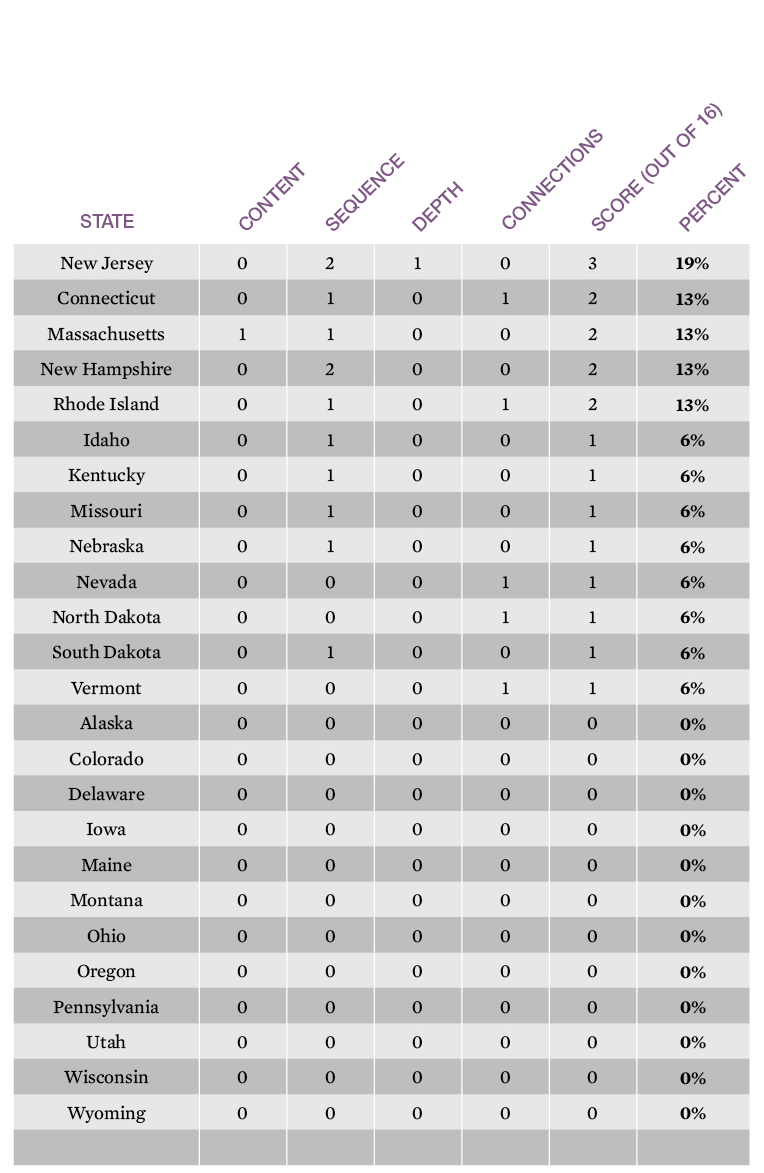 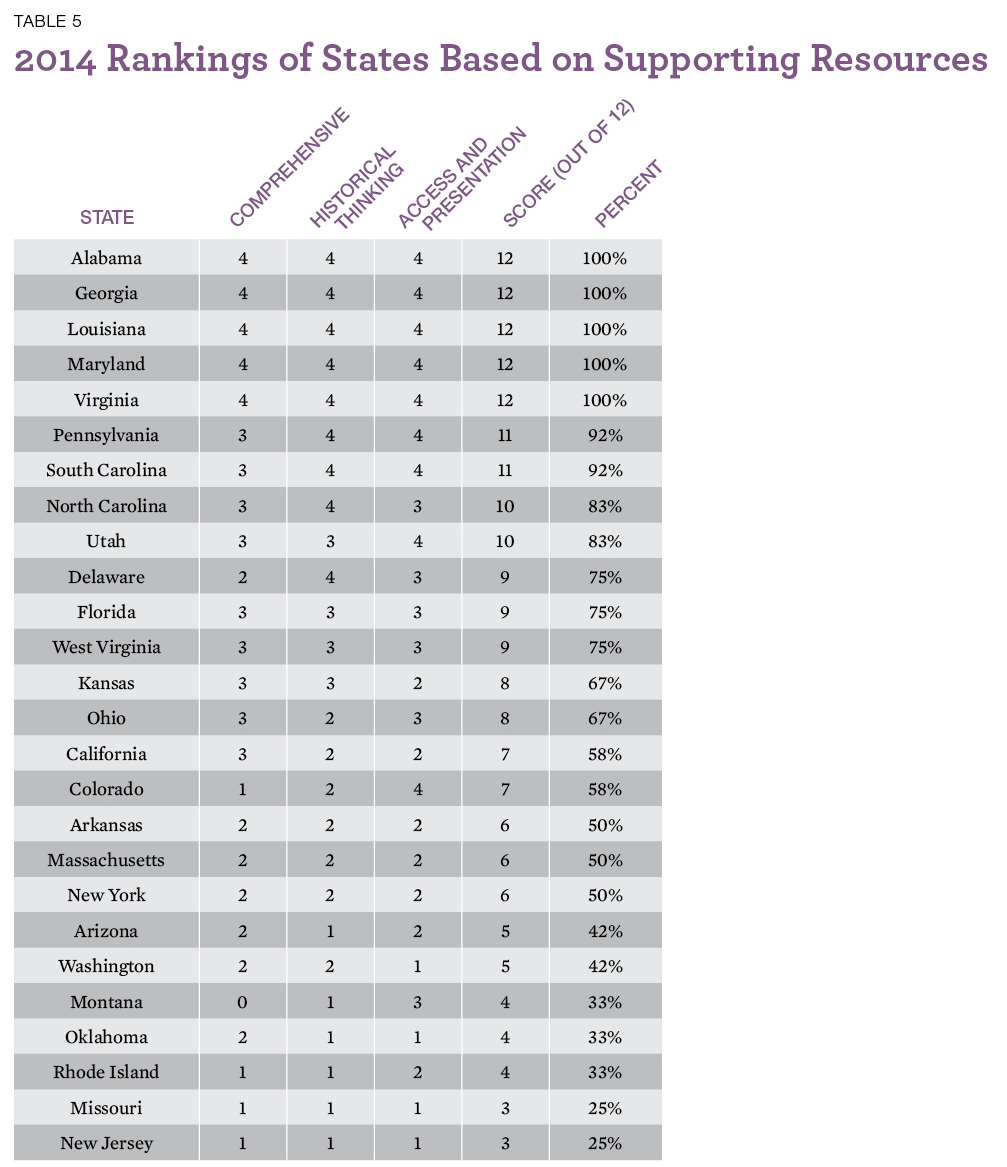 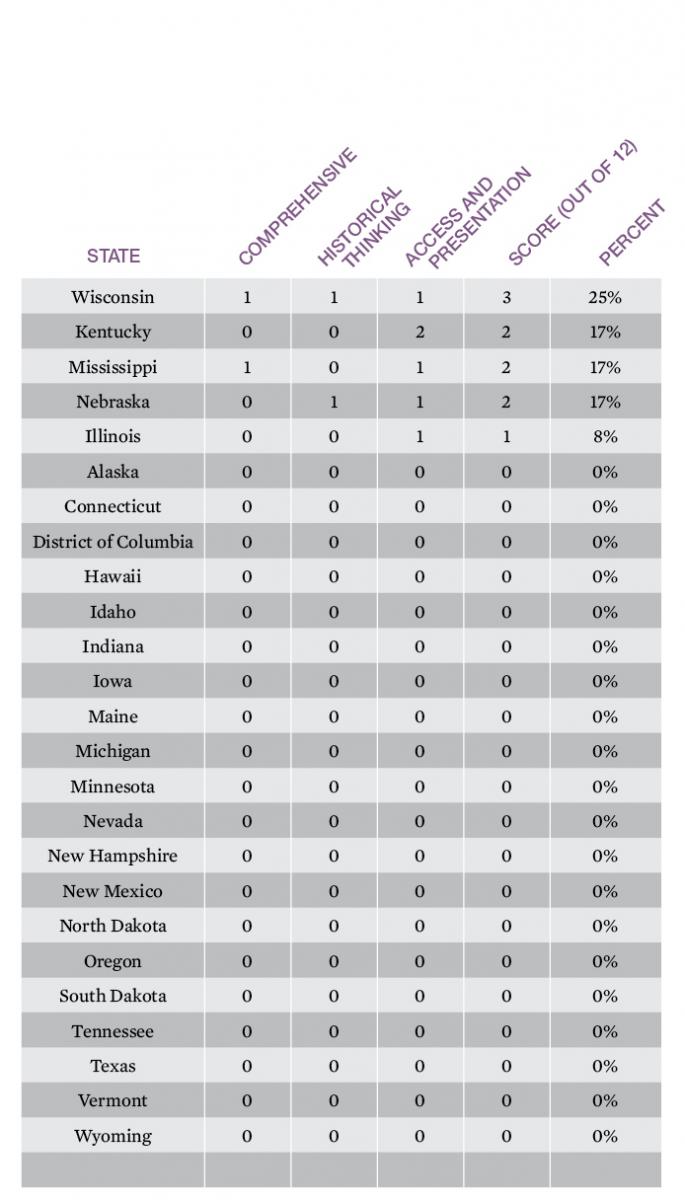 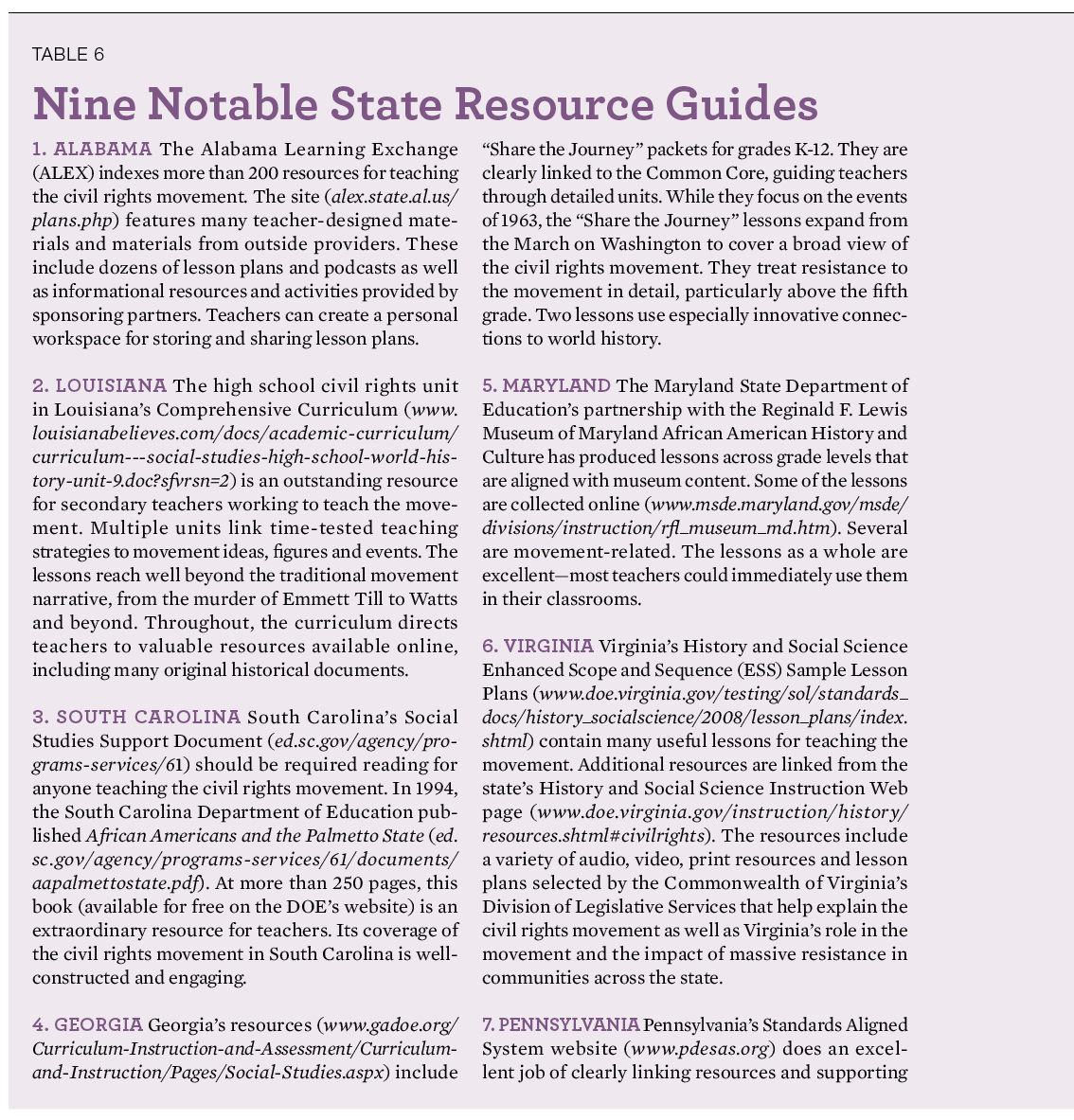 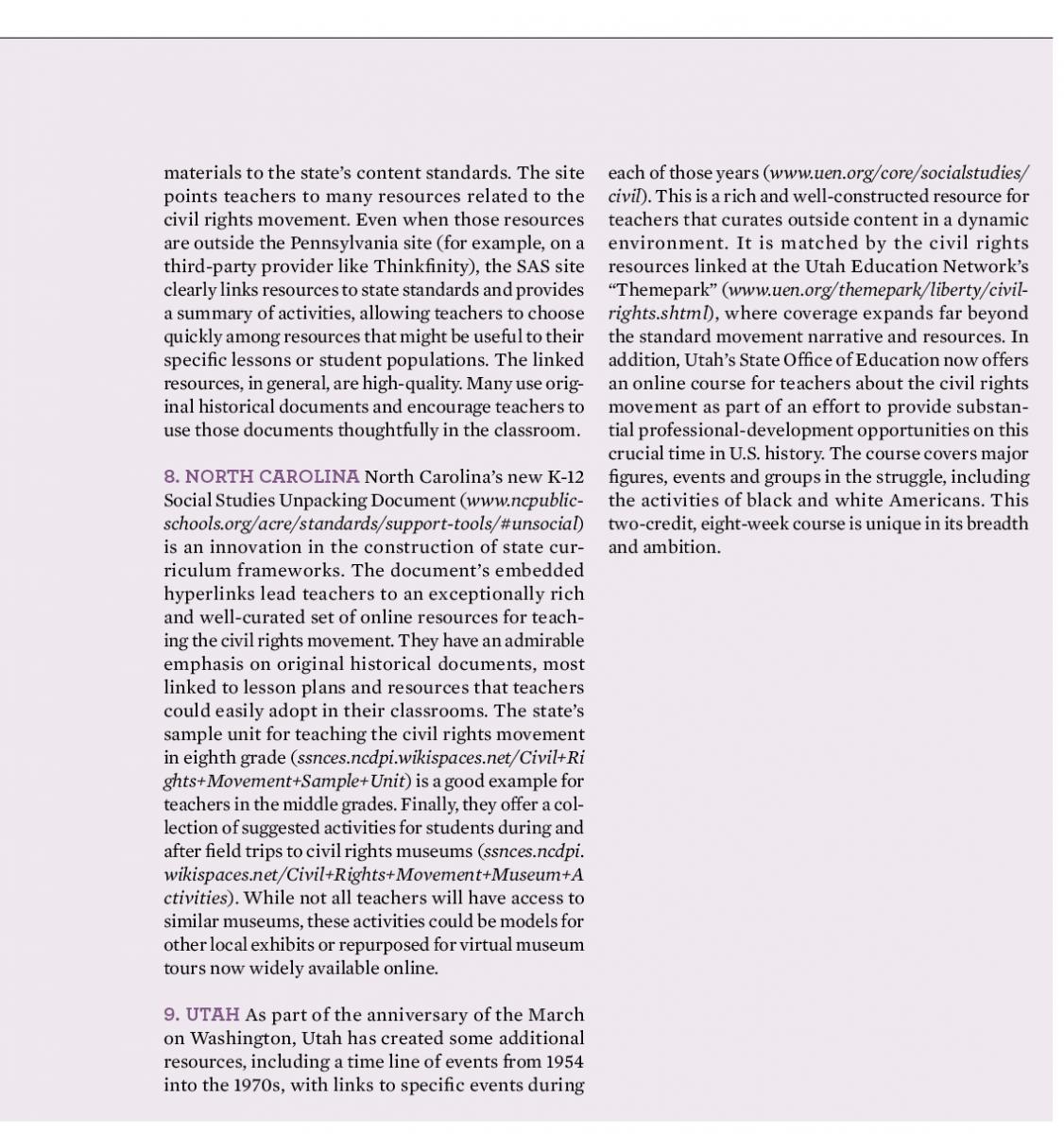 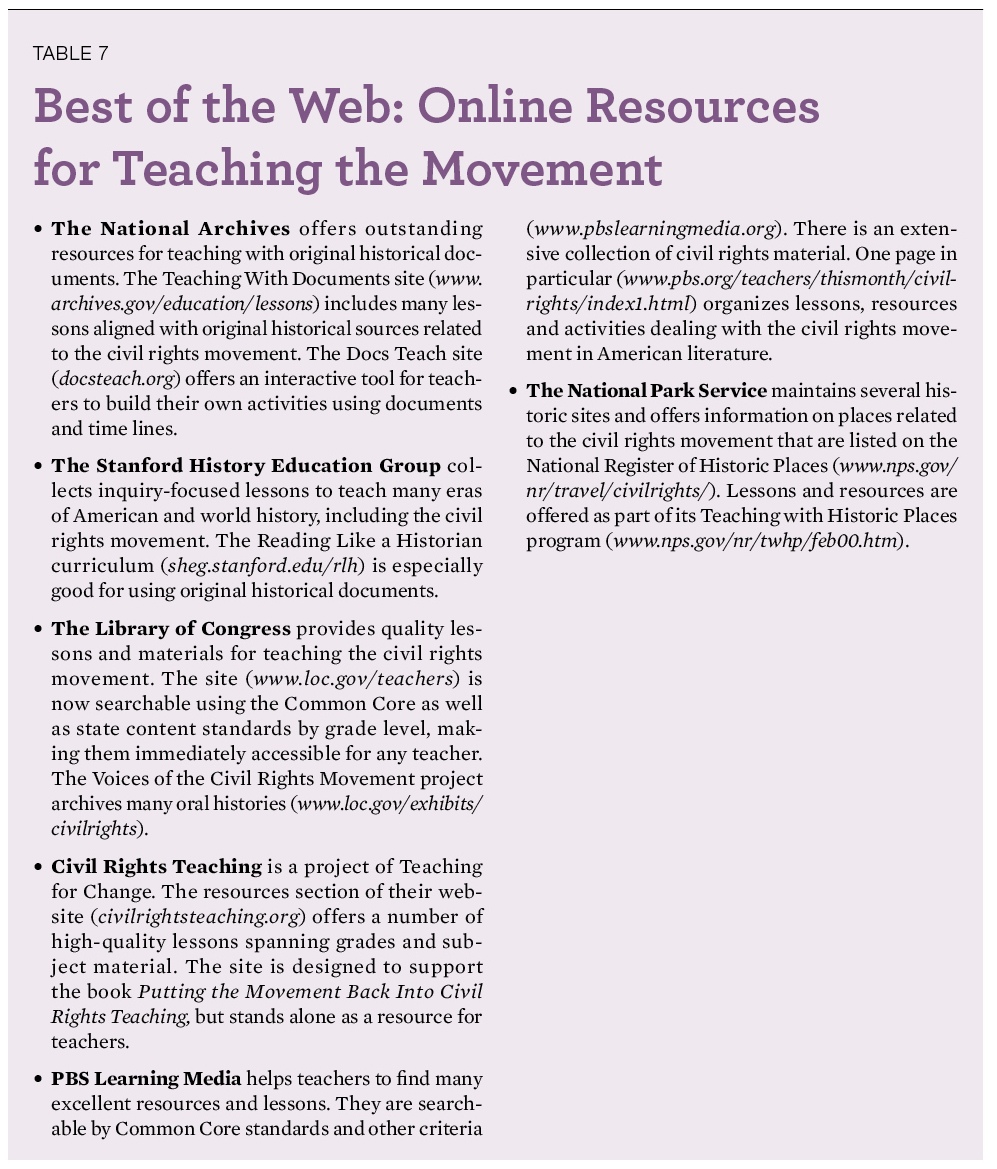