Want to Have a Conversation about Race? 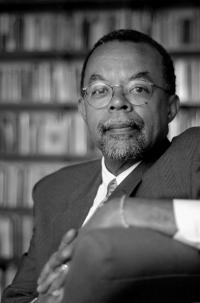 “The right of every American to first-class citizenship is the most important issue of our time,” baseball’s first black major leaguer once said. Really, it is the most important issue of every time. Not only is citizenship in a democracy a status one inherits or receives, it is a history each must carry forward to shape the future, a right that withers without constant vigilance and renewal.

Few understood this better than Jackie Robinson, the son of Georgia sharecroppers who, after lettering in four sports at U.C.L.A. and a court-martial trial prompted by his refusal to sit in the back of an army bus, stepped onto the field as a Brooklyn Dodger in April 1947 as a symbol of African Americans’ centuries-old quest to be regarded as citizens of equal rank with an equal opportunity to test their talents. At the time, the America Robinson lived in was largely defined by a stark and vicious color line, on the books and in the streets. Still, there was number 42, with his quiet but assertive play (hitting when he would be pitched to; stealing bases when he wouldn’t), teaching opposing players, ardent fans and the country as a whole how to rise above as a citizen of baseball and of the United States under the most trying circumstances.

“In order for America to be 100 percent strong – economically, defensively, and morally,” Robinson said, “we cannot afford the waste of having second- and third- class citizens.” The mission he had undertaken, what for decades members of the civil rights movement signed up for, was not simply an African-American or regional concern, but a model of resistance worthy of the nation’s founding ideals, too long subsumed. “Negroes aren’t seeking anything which is not good for the nation as well as ourselves,” Robinson explained. He was a true American hero.

Yet, despite the fact that his is the only number retired by every professional baseball team, Jackie Robinson is, at present, required teaching in only nine U.S. states, which, when it comes to preparing students in history, are in charge of what is and what is not covered. As surprising a fact as this is, Robinson fares better than other game-changing pioneers of the civil rights movement, including James Meredith, required teaching in seven states; Ruby Bridges, in two; and Charlayne Hunter-Gault, in one. What, you ask, do they have in common? Like number 42, they understood the struggle for citizenship to be the struggle of their time, except the fields they broke into were public schools, each of them braving the cold stares—and worse—of hate in order to receive the best possible education in their communities. This year marks the 60th anniversary of the Supreme Court’s historic Brown v. Board of Ed. decision ending segregation in American public schools. They are among those who forced its enforcement with their feet, hands and minds.

The movement they embodied wasn’t one or two or a dozen famous faces in the crowd, however; it involved generation after generation of faces, most of them anonymous but equally resilient, doing all they could to ‘make a way out of no way,’ as we say in the tradition. Yet how many in our schools today can even identify the contours of their struggle, the forces that opposed them, the strategies and tactics they developed, and the countless ways in which their movement was and remains connected to the struggles of people for liberation around the world?

Three years ago, the Southern Poverty Law Center’s Teaching Tolerance project sounded the alarm over the pervasive neglect of this history with its one-of-a-kind report card measuring state education standards. In that initial study, 35 states received a failing grade of F. Now, the SPLC has done it again, with improved benchmarking and greater state involvement. Yet, while there has been noteworthy progress since 2011, there are still 20 F’s out there, with 12 states requiring no teaching of the civil rights movement at all. To be commended are the three A’s in the group – Georgia, Louisiana and South Carolina – as well as California, which jumped from F to B under the SPLC’s updated evaluation system. Remarkably, however, when you add up all the A’s and B’s, seven out of 11 are former Confederate states, only reinforcing the dangerous misperception that black history is regional or only necessary where large pockets of African Americans reside.

Even more disturbing to me: Fewer than half of U.S. states today include in their major curriculum documents any information on Jim Crow laws, which, for a century, divided citizens by color according to the paradoxical formula, “separate but equal.” If students don’t understand these laws, or how they impacted the course of history, how will they ever be able to grasp the century of delay following emancipation that Dr. King pivoted from in the spontaneous “Dream” section of his iconic speech at the March on Washington in 1963? Or what the lawyers in Brown were up against? Or why the Civil Rights Act of 1964 and Voting Rights Act of 1965 were and remain necessary manifestations of the 14th Amendment’s guarantee of “equal protection of the laws”?

All of us are aware of the pressures our teachers and children are under to keep pace with the world’s students in science and math, but without a steep grounding in our history, what will rising generations have to pivot from? What will inspire them to remake their world with the confidence that comes from knowing it has been done before? Sensitive to these competing pressures as it works to study and promote the teaching of the civil rights movement, the SPLC is committed to working with all 50 states to empower teachers with robust curriculum and supporting resources, two measures new to the survey this time around. In response, states have also increased their efforts to present a fuller picture of where they are in order to understand where and how they can make progress. That’s what report cards are all about.

As for the naysayers, if working on my recent PBS series, The African Americans: Many Rivers to Cross (2013), covering the full 500-year sweep of African-American history, has taught me anything, it is that African Americans are inheritors of a great legacy. In fact, blacks make up 45 different ethnic groups and have produced one of the world’s most influential cultures, and the only way I was able to contain it in six one-hour episodes was by narrowing the 500 stories I received from professional historians down to 70. For this reason, black history, as such, should not be relegated to one week or month in the calendar but taught as it was lived within the larger American story.

Want to have a meaningful “conversation about race”? That conversation, to be effective and to last, to become part of the fabric of the national American narrative, must start in elementary school, and continue all the way through graduation from high school. It must do this in the same way that the story of the Mayflower, the Pilgrims, the Puritans, the “City Upon a Hill” and the key, shaping stories and myths about ourselves were formulated for us through the school curriculum. Teaching naturalizes history; the content that is taught in our schools makes knowledge second nature. And until the contributions of African Americans become second-nature to all American school children, desperate calls for one more “conversation about race” are destined to repeat themselves—in an endless cycle—following the next race-based hate crime. The only way for the citizens of a nation to know and understand their history is to know the whole story, not just the chapters that reinforce uncontested assumptions while carving out counter-narratives as set-asides and add-ons only if there is time.

Want to honor the people who gave their lives and risked so much during the movement? Ask your school leaders to improve their design for teaching the history of the civil rights movement and for interweaving the sweep of African-American history into your child’s social studies curriculum. It must be taught. It must be nurtured. It must be sustained.

As Colin Powell reminded us after the passing of Nelson Mandela last December, the civil rights movement in the United States, as in South Africa, freed both black and white citizens from the forces of oppression and paved the way for others around the world. Now that Madiba, too, is gone, like Jackie Robinson, like Dr. King, and all the other freedom fighters before them, it is not enough to mourn their loss and say there is no way to fill the void. We must prepare the way by teaching our children what the movement for freedom, for equal opportunity, and for multicultural democracy was and how it remains connected to their aspirations for a better future. “No one is born hating another person because of the color of his skin, or his background or his religion,” Mandela taught us. “People learn to hate, and if they can learn to hate, they can be taught to love, for love comes more naturally to the human heart than its opposite.”

Henry Louis Gates, Jr. is an Alphonse Fletcher University Professor and founding director of The Hutchins Center for African and African American Research at Harvard University.