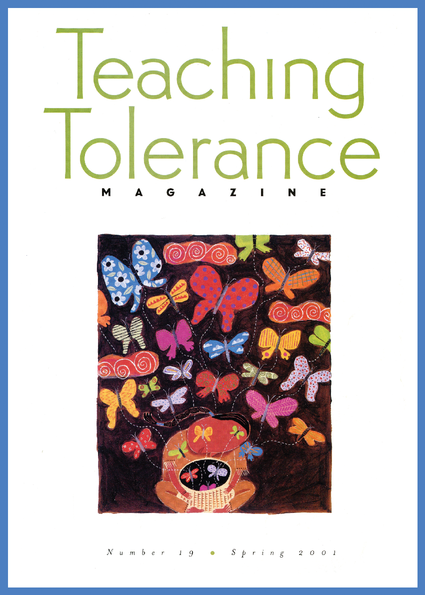 Most mornings of my teaching career have begun the same way. I rise well before light and don layers of waterproof and reflective clothing. With the darkness still heavy, I climb on my bike and begin the long ride to Irvington High School. "It's really kinda depressing, isn't it, Mr. Dow?" a student asked one morning as I wheeled my bicycle into the classroom.

"Riding my bike to school?"

"Yeah," she said, motioning with her head to suggest the gridlocked streets and smog-laden air that permeate Fremont, Calif. "You make all that effort, and it doesn't change anything."

I was crushed. Although I tried to persuade her that my actions were important, she left the conversation unconvinced. Unfortunately, her pessimism is not an exception. Too many of my students believe that while an average person may be able to make a statement, they have little chance of making a difference.

As an idealistic new teacher, I was convinced that if I exposed students to the complexity of peoples, oppression and injustices just beneath the whitewashing of popular culture and their textbooks, students would, of their own volition, begin standing up. But it's not that simple. I've found that, without the belief that change is possible, student outrage is just as likely as ignorance to lead to apathy.

In the integrated American Studies class I team-plan with four other teachers, we wanted to create an experience for our students that would not only challenge their perception of the world but also challenge their perceived inability to make a difference in it. The juniors in our classes had been studying the development of the welfare state from the Great Depression through the 1980s. With support from community members and local activists, we designed the Hunger at Home project as the unit's culminating event.

Through the project we wanted students to begin to see issues of hunger and poverty not simply as national problems but as challenges that were affecting our community and our school. Finally, we wanted to push our students to take action, designing and implementing programs that would meet real community needs and, in some small ways, change the world.

In Fremont, hunger is "someone else's problem." The city marks the northern terminus of Silicon Valley, and, despite its reputation as one of the Bay Area's last blue-collar towns, poverty and its effects do not make the headlines here. Local news outlets are much more interested in the ongoing renovation of the city's mall or where the new Bay Area Rapid Transit extension will run than in the growing social stratification of our community.

While the ethnic diversity of the city is often heralded, the economic diversity is ignored. I have students from East Asia, India, the Persian Gulf and Latin America all sharing a classroom, but also in that same classroom are children of dot-com executives and the children of those that serve them. Despite this mix, our students have been sold on the suburban myth that Fremont is an All-American City devoid of poverty. To help combat stereotypes about poverty and our community, we enlisted the help of Jessica Bartholow, Hunger Education Coordinator for the Alameda County Food Bank.

"Students always think the hungry are homeless," Bartholow explained. "They never perceive them as being someone like themselves or someone in their community."

In fact, Bartholow informed students, more than one-third of the county's undernourished live not in the city of Oakland but in suburban areas like Fremont. In our city alone, more than 2,400 people take advantage of emergency food services each month. More than half the people served by the Alameda County Food Bank are White, and 40 percent of them are children. Of these children, two-thirds come from working families.

Students were startled by their changing perceptions of who was going hungry. "It's amazing how much is happening in the community without obvious publicity," said junior Alexis Turpin. Another student, David Hurst, came to understand for the first time that the poor "are not just lazy, but most are responsible people who need a little boost."

Once students understood that hunger was, in fact, a part of our community, the next step was challenging them to come up with unique service proposals that addressed real hunger-related needs in Fremont. As teachers, we watched nervously as they struggled to draft proposals that were realistic.

As groups of students began to formalize their action plans, Bartholow again visited our classroom, pushing the teens deeper with a barrage of questions: "What group of people are you specifically wanting to help? How does this benefit the community, the people in need?" Once students had proposed a plausible and beneficial service, Bartholow used her extensive contacts to connect student groups with the local community organizations whose goals mirrored their own.

Overnight, our classrooms were transformed from rows of desks and chalkboards into something approximating an activist nerve center. Students made phone calls, held interviews, conducted and analyzed research, scheduled appointments and events, and penned editorials and letters to the editor. Campus activism had transcended the domain of old photographs from long-ago movements and become the daily currency of our classroom.

One group of students felt particularly strongly about a bill in the state legislature that would ensure all low-income students had access to school breakfast programs. After getting the support of two local elementary school teachers, the group designed a curriculum about the proposed legislation and the problem of hunger in Fremont and presented it to two 6th grade classes.

The lesson culminated in an effort of political activism by the entire 6th grade. Using a common hunger advocacy tactic, students and teachers alike wrote letters supporting the bill to their state senator on paper plates that symbolized hunger. That summer, their senator succeeded in getting the legislation passed (although it was later vetoed by the governor).

Energized by their success, these same students refocused their attention on their more immediate community of Irvington High School. While free and reduced-price breakfast and lunches were available at Irvington, our students noticed a disturbing flaw in the system.

It became clear that, given the tools to take action in their lives, community and world, students will meet the challenge whole-heartedly.

For expediency's sake, the cafeteria staff had divided students ordering food into two distinct lines: those paying in cash or with traditional meal tickets and those who had free or reduced-price meal plans. Not surprisingly, there was a great deal of shame and embarrassment associated with standing in the free or reduced-price line. Many students who held free or discounted lunch tickets were choosing to go hungry -- the exact problem the free lunch program was designed to alleviate -- rather than endure the social stigma of poverty.

When my juniors began to question the necessity of segregating the students, they were met with the simple response that that was the way it had always been. The group persisted, and, after several meetings with administrators, finally won approval for integrating the two lunch-counter lines. Within a week, the lines were merged and students could buy lunch without fear of being labeled.

During the hunger awareness project, students performed a variety of community services. While many groups focused on education or volunteer work, such as helping at the local food bank, several took on less public, but equally important, work. Student Aelia Fatima's group drew on their cultural heritage and variety of home languages to translate community outreach materials into Spanish and Hindi. "Our goal," Aelia said, "was to let the community know that their children can get food service programs even though schools are out [for the summer]."

The Power to Change

Over the course of the Hunger at Home project, we watched our students move from apathy to activism. It became clear that, given the tools to take action in their lives, community and world, students will meet the challenge whole-heartedly. In her class reflection, Aelia wrote, "The community is responsible for each other. When a community member is in need, we must all take a step together to help."

Christina Castro and Lea Meier shared Aelia's sentiments and carried their newfound belief into their lives beyond school. Together they helped push their church youth group to begin working to support local food agencies through volunteerism and food and clothing drives.

My colleague Clementine Whalen's freshman classes were also emboldened by the example set by the hunger project. They designed and implemented a letter-writing campaign that secured funds to help provide the school's mandatory day planners free of charge to students who could not afford them.

My sophomores also followed the juniors' lead. This year we examined our school board's decision to change school attendance boundaries in a way that would further stratify Fremont schools along ethnic and socioeconomic lines. Two students, who had been failing my class until that point, organized a small core of student activists to resist the change.

Together they spearheaded a series of informational meetings for concerned students and helped rally a diverse contingent of Irvington students to attend school board meetings. Under heavy pressure from the community, the school board eventually backed down and reversed its boundary decision.

When we began the process of crafting the Hunger at Home project, I was leery. I had been burned by student indifference and was concerned that, if the project failed, it would only harden students' beliefs that they were powerless. Instead, adding the dynamic element of student activism to our curriculum has transformed our classrooms and our students.

Students who had never taken the issue of hunger seriously -- and certainly never considered volunteering -- were empowered by seeing their actions have a positive impact on others' lives.

Student Leslie Ann Abarientos reflected on her experience, "Although it doesn't seem like much of a big deal now, just being able to touch others with what we know and learn creates a big bang throughout society."