BROWN V. BOARD: Timeline of School Integration in the U.S.

Trace school integration from 1849 to 2007.
Issue 25, Spring 2004
Teach This in a Learning Plan
X
Add to an Existing Learning Plan
START A NEW LEARNING PLAN
Bookmark BROWN V. BOARD: Timeline of School Integration in the U.S.
Print 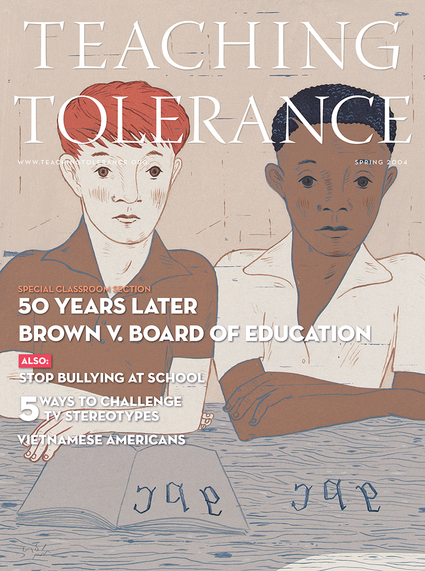 1849 The Massachusetts Supreme Court rules that segregated schools are permissible under the state's constitution. (Roberts v. City of Boston) The U.S. Supreme Court will later use this case to support the "separate but equal" doctrine.

1857 With the Dred Scott decision, the Supreme Court upholds the denial of citizenship to African Americans and rules that descendants of slaves are "so far inferior that they had no rights which the white man was bound to respect."

1861 Southern states secede from the Union. The Civil War begins.

1863 President Lincoln issues the Emancipation Proclamation, freeing slaves in Southern states. Because the Civil War is ongoing, the Proclamation has little practical effect.

1865 The Civil War ends; the Thirteenth Amendment is enacted to abolish slavery.

1868 The Fourteenth Amendment is ratified, guaranteeing "equal protection under the law"; citizenship is extended to African Americans.

1883 The Supreme Court strikes down the Civil Rights Act of 1875 finding that discrimination by individuals or private businesses is constitutional.

1908 The Supreme Court upholds a state's authority to require a private college to operate on a segregated basis despite the wishes of the school. (Berea College v. Kentucky)

1927 The Supreme Court finds that states possess the right to define a Chinese student as non-white for the purpose of segregating public schools. (Gong Lum v. Rice)

1936 The Maryland Supreme Court orders the state's white law school to enroll a black student because there is no state-supported law school for Blacks in Maryland. (University of Maryland v. Murray)

1938 The Supreme Court rules the practice of sending black students out of state for legal training when the state provides a law school for whites within its borders does not fulfill the state's "separate but equal" obligation. The Court orders Missouri's all-white law school to grant admission to an African American student. (Missouri ex rel. Gaines v. Canada)

1940 30% of Americans — 40% of Northerners and 2% of Southerners — believe that Whites and Blacks should attend the same schools.

A federal court requires equal salaries for African American and white teachers. (Alston v. School Board of City of Norfolk)

1950 The Supreme Court rejects Texas' plan to create a new law school for black students rather than admit an African American to the state's whites-only law school. (Sweatt v. Painter)

The Supreme Court rules that learning in law school "cannot be effective in isolation from the individuals and institutions with which the law interacts." The decision stops short of overturning Plessy.

The Supreme Court holds that the policy of isolating a black student from his peers within a white law school is unconstitutional. (McLaurin v. Oklahoma State Regents for Higher Education)

1952 The Supreme Court hears oral arguments in Brown v. Board of Education. Thurgood Marshall, who will later become the first African American justice on the Supreme Court, is the lead counsel for the black school children.

1953 Earl Warren is appointed Chief Justice of the Supreme Court.

The Supreme Court hears the second round of arguments in Brown v. Board of Education of Topeka.

1954 In a unanimous opinion, the Supreme Court in Brown v. Board of Education overturns Plessy and declares that separate schools are "inherently unequal." The Court delays deciding on how to implement the decision and asks for another round of arguments.

The Court rules that the federal government is under the same duty as the states and must desegregate the Washington, D.C., schools. (Bolling v. Sharpe)

1955 In Brown II, the Supreme Court orders the lower federal courts to require desegregation "with all deliberate speed."

1956 49% of Americans — 61% of Northerners and 15% of Southerners — believe that Whites and Blacks should attend the same schools.

Tennessee Governor Frank Clement calls in the National Guard after white mobs attempt to block the desegregation of a high school.

Under court order, the University of Alabama admits Autherine Lucy, its first African American student. White students and residents riot. Lucy is suspended and later expelled for criticizing the university.

The Virginia legislature calls for "massive resistance" to school desegregation and pledges to close schools under desegregation orders.

1958 The Supreme Court rules that fear of social unrest or violence, whether real or constructed by those wishing to oppose integration, does not excuse state governments from complying with Brown. (Cooper v. Aaron)

10,000 young people march in Washington, D.C., in support of integration.

Prince Edward County, Va., officials close their public schools rather than integrate them. White students attend private academies; black students do not head back to class until 1963, when the Ford Foundation funds private black schools. The Supreme Court orders the county to reopen its schools on a desegregated basis in 1964.

1961 A federal district court orders the University of Georgia to admit African American students Hamilton Holmes and Charlayne Hunter. After a riot on campus, the two are suspended. A court later reinstates them.

1962 A federal appeals court orders the University of Mississippi to admit James Meredith, an African American student. Upon his arival, a mob of more than 2,000 white people riots.

1963 62% of Americans — 73% of Northerners and 31% of Southerners — believe Blacks and Whites should attend the same schools.

Two African American students, Vivian Malone and James A. Hood, successfully register at the University of Alabama despite George Wallace's "stand in the schoolhouse door" — but only after President Kennedy federalizes the Alabama National Guard.

For the first time, a small number of black students in Alabama, Mississippi, Louisiana and Mississippi attend public elementary and secondary schools with white students.

1964 The Civil Rights Act of 1964 is adopted. Title IV of the Act authorizes the federal government to file school desegregation cases. Title VI of the Act prohibits discrimination in programs and activities, including schools, receiving federal financial assistance.

The Rev. Bruce Klunder is killed protesting the construction of a new segregated school in Cleveland, Ohio.

In a private note to Justice Brennan, Justice Warren writes: "When this opinion is handed down, the traffic light will have changed from Brown to Green. Amen!"

1969 The Supreme Court declares the "all deliberate speed" standard is no longer constitutionally permissible and orders the immediate desegregation of Mississippi schools. (Alexander v. Holmes County Board of Education)

1971 The Court approves busing, magnet schools, compensatory education and other tools as appropriate remedies to overcome the role of residential segregation in perpetuating racially segregated schools. (Swann v. Charlotte-Mecklenberg Board of Education)

Brown's legacy extends to gender. Title IX of the Educational Amendments of 1972 is passed prohibiting sex discrimination in any educational program that receives federal financial assistance.

1973 Section 504 of the Rehabilitation Act is passed prohibiting schools from discriminating against students with mental or physical impairments.

The Supreme Court finds that the Denver school board intentionally segregated Mexican American and black students from white students. (Keyes v. Denver School District No. 1) The Court distinguishes between state-mandated segregation (de jure) and segregation that is the result of private choices (de facto). The latter form of segregation, the Court rules, is not unconstitutional

The Supreme Court rules that education is not a "fundamental right" and that the Constitution does not require equal education expenditures within a state. (San Antonio Independent School District v. Rodriguez) The ruling has the effect of locking minority and poor children who live in low-income areas into inferior schools.

1974 The Supreme Court blocks metropolitan-wide desegregation plans as a means to desegregate urban schools with high minority populations. (Milliken v. Bradley) As a result, Brown will not have a substantial impact on many racially isolated urban districts.

Non-English-speaking Chinese students file suit against the San Francisco Unified School District for failing to provide instruction to those with limited English proficiency. The Supreme Court rules that the failure to do so violates Title VI's prohibition of national origin, race or color discrimination in school districts receiving federal funds. (Lau v. Nichols)

1978 A fractured Supreme Court declares the affirmative action admissions program for the University of California Davis Medical School unconstitutional because it set aside a specific number of seats for black and Latino students. The Court rules that race can be a factor in university admissions, but it cannot be the deciding factor. (Regents of the University of California v. Bakke)

1986 For the first time, a federal court finds that once a school district meets the Green factors, it can be released from its desegregation plan and returned to local control. (Riddick v. School Board of the City of Norfolk, Virginia)

1991 Emphasizing that court orders are not intended "to operate in perpetuity," the Supreme Court makes it easier for formerly segregated school systems to fulfill their obligations under desegregation decrees. (Board of Education of Oklahoma City v. Dowell) After being released from a court order, the Oklahoma City school system abandons its desegregation efforts and returns to neighborhood schools.

1992 The Supreme Court further speeds the end of desegregation cases, ruling that school systems can fulfill their obligations in an incremental fashion. (Freeman v. Pitts)

The Supreme Court rules that the adoption of race-neutral measures does not, by itself, fulfill the Constitutional obligation to desegregate colleges and universities that were segregated by law. (United States v. Fordice)

1995 The Supreme Court sets a new goal for desegregation plans: the return of schools to local control. It emphasizes again that judicial remedies were intended to be "limited in time and extent." (Missouri v. Jenkins)

1996 A federal appeals court prohibits the use of race in college and university admissions, ending affirmative action in Louisiana, Texas and Mississippi. (Hopwood v. Texas)

2001 White parents in Charlotte, N.C., schools successfully seek an end to the desegregation process and a bar to the use of race in making student assignments.

2002 A report from Harvard's Civil Rights Project concludes that America's schools are resegregating.

2003 The Supreme Court upholds diversity as a rationale for affirmative action programs in higher education admissions, but concludes that point systems are not appropriate. (Grutter v. Bollinger; Gratz v. Bollinger)

A study by Harvard's Civil Rights Project finds that schools were more segregated in 2000 than in 1970 when busing for desegregation began.

2004 The nation marks the 50th anniversary of Brown v. Board of Education.

The nation marks the 50th anniversary of the Little Rock Nine.

Login to join the conversation
This is a terrific timeline. Thank you so much for publishing it. It seems like it is missing the decision by Judge Arthur Garrity to desegregate Boston schools using busing.
Please include the 1914 case of Maestas v. Shone in your timeline. This is the link for a Phi Delta Kappan article regarding Mexican-American resistance to school segregation and the author references this case. https://www.kappanonline.org/mexican-american-resistance-school-segregation-donato-hanson/