A juvenile facility in Detroit focuses on development, not detention.
Dana Williams
Issue 25, Spring 2004
Bookmarked 2 times
Illustration by Whitney Sherman
Add to a Learning Plan
X
Add to an Existing Learning Plan
START A NEW LEARNING PLAN
All articles from this issue
Print

Twelve teenage boys look up from their seats as a teacher stands at the chalkboard explaining a complicated math problem. They appear captivated by the tall man standing before them with the booming voice and commanding presence. A former NFL player, Michael Oldham has spent the last few years teaching young adults, inspiring their minds and ambitions with a mix of mathematics and mentoring.

Behind Mr. Oldham are posters that read "If you think nobody cares, think again," and "You won't know the outcome until you try." If the personal interaction he shares with his students is any indication, these posters are much more than empty words on a wall.

Just down the hall, four tables of teenage girls work on various art projects using oil pastels. Laura Wayne, their teacher, visits from table to table, hunching over to offer advice on color choices or drawing techniques. One girl sketches a blue Corvette, so immersed in the strokes of her pen she hardly notices Ms. Wayne leaning over to compliment her work.

These students are attending the first week of summer school at Detroit's Benjamin Carson Academy (BCA), believed to be the nation's first charter school for juvenile offenders.

Opened in 1999, BCA is housed in the newly built Wayne County Juvenile Detention Facility, a state of the art, 89,300-square-foot building in downtown Detroit with half a dozen gymnasiums, two computer labs, a media center, mental health unit and medical and dental facilities. All Wayne County youth ages 8 to 21 who are arrested or removed from their families are held at this facility and, while incarcerated, attend school at BCA.

It isn't the architecture or physical amenities, however, that has drawn praise from juvenile justice advocates and experts nationwide. It is instead the school's unique focus on providing a nurturing atmosphere and quality education. It also is the mentoring and personal attention aimed at helping young people gain control of their studies — and their lives.

With more than 600,000 children admitted each year to some 500 secure juvenile detention facilities in the United States, such gains are vital.

"We try to touch each and every kid here," said principal Nathaniel King. "We try to make kids like school again, make them aware that they can learn, and we try to reach them at their level."

That's a daunting task for any school, but especially this one. Some 3,000 to 4,000 youth enter and leave the juvenile facility during a given year, with an average daily enrollment of about 170 students. The majority of students enrolled at BCA are urban youth who have been in and out of school, in trouble with the law, functioning well below grade level. 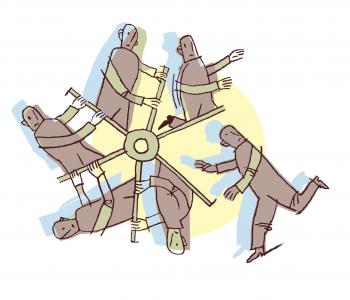 Adding to those challenges is the uncertainty in length of enrollment. Students may remain in the school for a couple of weeks or a few years, depending on the severity of their offense and how quickly or slowly the case moves through the system. That revolving door, King says, is often frustrating, sometimes heartbreaking.

"You go through your process, you're making in-roads with a kid, you see the light bulb go off — then they're gone. But you hope that you've helped instill that yearning for learning, and you just hope it continues."

Efficiency, flexibility and a team-approach, King says, are key to helping kids get the most from their time at BCA.

"We have to manage every case effectively, as if kids are going to be here for the entire school year," said King. "We deal with and expect the turnover, but we still try and treat each and every kid as if it's a kid we'll have around for the whole year."

Helping King manage each case is a staff of 15 certified teachers, 13 teachers' aides, three social workers and an active five-member board.

Patricia Moore, lead social worker, plays a vital role in making sure students receive instruction appropriate for their educational level. Her staff is responsible for identifying students with special education and mental health needs — about 30 percent of the students enrolled.

The team of social workers has implemented a specialized model to identify and evaluate students with special education needs upon arrival to BCA. Like medical and dental screenings, identification of special education and mental health needs is part of the registration process. A child study team meets weekly to review students with special concerns.

Constant exchange of information with the public school system ensures that necessary records are not only obtained by Benjamin Carson Academy but also are forwarded to a student's home school once he or she has completed time in the juvenile facility.

"In the last three years, we've evaluated and identified five students missed in the Detroit Public Schools as having special education needs," said Moore. "We pass that information on once the students leave us, and they can start getting the services they need when they get back to their regular school."

Aside from identifying students requiring special education services, BCA staff also identify and assess students' academic level, grouping them by ability rather than age or grade.

"We may have had 11th-graders who couldn't read or were very poor readers," said King. "If you put that kid in a class with other kids who are performing at academic level, he is going to act out. He's going to act out because he is behind and he doesn't want anybody to know it."

King says this approach improves classroom environment as well as student confidence. "If a kid mispronounces a word or doesn't understand something, there is no ridicule. They're not afraid to ask for help or admit they don't get something because they know other kids in the class need help, too."

About 90% of youth serving time in the Wayne County Juvenile Detention Facility are African American. The staff of BCA works to integrate African-American history and culture into all aspects of the students' experience.

"Culture counts," says Leonard Dixon, director of the Wayne County Juvenile Detention Facility. "Many of these kids don't know much or anything at all about black leaders and other folks who overcame hard times and accomplished great things. We try to give them a sense of this history, to show them what is possible."

A plaque bearing the face of an African-American leader hangs at every classroom door, and a library mural highlights famous faces, past and present, of black history. The units in which students are held while serving time in the juvenile facility are named for leaders in the black community, too.

"Numbers don't mean anything to anybody," Dixon said, stopping a tall teenage boy in line during a class change to ask him the name of his unit.

"Frederick D., I'm on Frederick D.," the student responded, before turning to catch up to the rest of his class in line.

Most days at BCA, the staff's work doesn't end with the school day. Many put in extra hours administering an after-school program four nights each week, offering students extra help in reading, math and GED preparation. A weekend program brings in motivational speakers and involves kids in activities like chess and stock clubs. The BCA staff encourages parents to remain involved while their children are in the juvenile facility.

"We probably have a better turnout at our parent/teacher conferences than some public schools," King said. "We have an innovative staff, and we do come up with some interesting strategies to get them in here and get them involved."

"Whatever it takes to get them in here, to let them know that we want them to be here and to be involved," King said.

It's not the kids with the 3-point GPAs, the ones with the two-parent homes and the middle-class incomes who need the most help. It's these kids—they need all the help we can give, and then more.

Teachers aren't the only ones going the extra mile. James Perkins, a judge in the juvenile court, can be seen in his robe hearing a case in the morning, then up on the floor helping a student with homework in the afternoon.

That kind of dedication sends a strong message to the youth.

"If a kid comes before me in court but still knows I might be up on the floor later, that kid knows I'm interested. And he knows I'm going to know what he is doing and that I'll have that information when he comes before me again," Perkins said. "That can make a difference in how that kid spends his time in here."

The Wayne County Juvenile Detention Facility hasn't always been the juvenile justice model it is today. Before moving into the new facility, the center was not unlike many juvenile facilities across the country — overcrowded, dilapidated, poorly run and poorly staffed. The facility also was under investigation by the Civil Rights Division of the U.S. Justice Department.

"We used to have eight or nine fights a day in the old building. Now, if we have two fights in a two-week period, we think the kids are off the hook," King said. "But those were signs of the residual effects of poor programming and a lack of consistency. It was an atmosphere of chaos."

That all changed, King says, not only with the new facility, but also with the implementation of a sound educational program run and administered by New Jersey-based Innovative Educational Strategies.

"As the academic program evolved, behavior improved," said King. "We started dealing with the kids on an individual basis, spending time with them after school."

"It's a developmental approach," Carter said. "We're attempting to develop something in these young people that will help them improve their lives. It is as much a juvenile development facility as it is a detention facility."

According to King, it's an approach more people should consider.

"It's not the kids with the 3-point GPAs, the ones with the two-parent homes and the middle-class incomes who need the most help. It's these kids—they need all the help we can give, and then more."

Michael, a soft-spoken 17-year-old, speaks of the help he's received during his four months at BCA. Wearing a dark blue jumpsuit and bright white shoes, he sits at a table in the library where he is helping label and repair books.

"I like coming in here to work," Michael says, looking up from the stack of paperbacks in front of him. "It's quiet in here. I can think about things while I'm doing this."

He has quite a few things to think about. In less than 24 hours he will face sentencing for attempted murder. Originally from Ohio, Michael got into trouble while visiting family in Detroit, his life forever changed by a handgun and one very bad decision.

"I'll be locked up for a minute; but this will be the first and the last time. One day, I'm going to own my own business," he says, folding his arms and leaning forward with a determined expression.

Michael credits teachers at BCA and other adults at the detention facility for helping plant those seeds of determination. Especially math teacher, Mr. Oldham.

"He's been a role model. That's something I've never really had before," Michael says.

"He listens, he'll help you in any way he can, and he has worked with me a lot, helped me get myself together. I know that I can get out of here one day and make something out of myself."