When you’re the only person of color in your class, school can become a struggle between two worlds.
Afi-Odelia E. Scruggs
Issue 37, Spring 2010
Illustration by Scott Bakal
Teach This in a Learning Plan
X
Add to an Existing Learning Plan
START A NEW LEARNING PLAN
Bookmark The Only One
Print 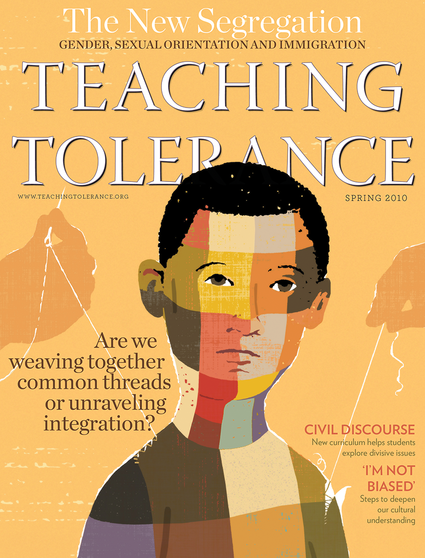 As a student at an elite private school, Hall felt that this was a reasonable request. But she still recalls the teacher who ridiculed her, saying, “Why on earth would a black kid want to study German?”

Hall didn’t turn to her parents. She knew they’d urge her to be grateful for the chance to attend a top-tier school — even if she felt isolated among the predominantly white student body.

She never forgot how it felt to be the “only one.” As an adult, she married a man who’d had a similar school experience. The two thought long and hard before sending their children into the same situation.

In the end, though, the North Carolina couple did decide to send their four children to a small private school. Hall’s son is one of four students of color attending the high school. (She asked that the school not be identified.)

“We really struggled with whether to go that route. Because we are very hands-on with schools, it has worked to a certain point,” she said. Tia Hall is not alone. When parents have the power to choose the school their children attend, tough questions follow. What values will my child learn here? How do I know they will be welcome? For parents of color, there is often an added question: Do I send my child to a school where she will be in a minority of one?

Educators say Hall’s story is far too common among students who are the only ones in their school or class. Minority children in schools where there are few, if any, of their ethnicity or racial group battle to balance the various worlds they inhabit.

Fabiana Kimberly Silva, a college student in Santa Barbara, Calif., said she was the only Bolivian when she attended middle and high school. While seeking acceptance from Mexicans and Anglo students and staff, she almost lost her culture.

“I had faced discrimination and racism from Mexicans in school because they didn’t understand my culture. They saw me as an intruder,” she said. “And also from white Americans because I was a Latina and they usually thought I was Mexican.

“I had to adapt to these cultures by interacting with both, mixing my Spanish with the Mexican way of talking and learning English at the same time.”

Silva said the prejudice made her question her abilities, but her mother and school counselors supported her.

Jarrod Schwartz, the executive director of Just Communities, a social justice organization in Santa Barbara, said he often hears doubts voiced by high-achieving Latino students who, like Silva, end up in advanced placement courses in the city’s public schools.

He said students who are accused of acting white by their peers worry about abandoning their community or selling out.

“The one question is ‘Do I belong here? Do I belong in this class?’” Schwartz said.

On the other hand, the same students feel used by people who point to their academic success to deny the existence of racism.

“High-achieving Latino students will be brought [out] and celebrated, and we don’t see the price until we get with them and talk to them,” Schwartz said.

That’s because students of color who are the only ones, or one of a few, often become the representative for their race or ethnicity, researchers say.

“You’re expected to represent and explain your group, be responsible for your group’s actions,” said Ronald Chennault, an associate professor in the department of education policy studies at DePaul University in Chicago.

Tia Hall believes students solve this dilemma by developing what she calls “the chameleon complex.” They change their appearance, speech and demeanor when they change environments, but they find they still cannot live up to everyone’s expectations.

“White children have TV expectations of black people; for example, you have this hipness. You’re all about jokes and rhymes and hip hop,” she said. “You’ve got blacks saying, ‘You think you’re white,’ and white kids saying, ‘What kind of black kid are you that you don’t do this?’”

She and her husband decided that talking about racial differences, not ignoring them, was the best way to ensure their children feel comfortable as the “only ones.” She insists that faculty and staff understand that her family often has a different experience and point of view from the majority, and that the point of view is valid.

That’s why, for example, she demanded a teacher confront the presence of the n-word, when it came up during the reading of “Sounder.”

“I approached the teacher, because you can’t have a book like that and not deal with the word,” Hall said.

She said other parents should adopt a similar assertiveness, if their children are “the only ones.”

“We black people shouldn’t be ashamed to have these conversations,” she said. “I’m a consumer, and I have just as much right to speak to the quality of my child’s education.”