n. pl. Children’s dictionaries have the power to shape how kids see the world. Be sure yours promotes tolerance.
Carrie Kilman
Issue 41, Spring 2012
Bookmarked 3 times
Illustration by John Reinfurt
Add to a Learning Plan
X
Add to an Existing Learning Plan
START A NEW LEARNING PLAN
All articles from this issue
Print

Every 10 or so years, Houghton Mifflin Harcourt releases a new edition of the American Heritage Children’s Dictionary. In 2009, editors did something they had rarely done before: They reviewed and revised almost every single definition and added more than 2,000 new words and senses. The result was a massive overhaul for one of the most commonly used children’s reference books in the United States.

The previous edition, published in 2003, was ripe for revision: It omitted several words related to personal and cultural identity, like atheist, gender and ethnicity; it defined gay as merely “cheerful” and “merry”; and its example sentences assumed that being male and having white skin were the norm.

“As we started revising, we realized there was a lot of stuff that sounded completely out-of-date,” said Steve Kleinedler, executive editor for American Heritage Dictionaries. “What was supposed to be a simple revision involving a couple of editors ended up involving the whole staff.”

“Language changes very fast—and it’s our job to reflect how that language is being used,” said Louise Robbins, senior editor for Houghton Mifflin Harcourt’s Trade and Reference Division and the project director for the revised children’s edition. For example, Robbins said, “We all realized kids hear the word gay in school. You can’t just say gay means ‘cheerful’ or ‘merry’ and pretend there isn’t another meaning that is more common in the culture.”

Suddenly, feminism was in, as were gender and atheist. Family-relationship words, like marriage, were redefined to be gender-neutral. The definition of ethnic was expanded. Words that connote skin color were revised (the definition of tan was changed from “skin turning brown” to “skin becoming darker”). Illustrations and example sentences now offered a balance of ethnicities, genders and abilities. And gay was redefined.

“We needed to respond to the fact that these issues are being addressed and discussed at younger and younger ages,” Kleinedler said.

Children encounter new words every day. Although dictionaries designed for young readers can help students explore and experiment with language, it turns out many mainstream children’s dictionaries fail to accurately describe the world in which many students live.

“A lot of teachers rely on asking students to look things up, and they assume their students are getting accurate information,” Scharf said. “Until this research, it never occurred to me to question the dictionary. I think most people think ‘a definition is a definition.’”

Scharf looked at eight of the most commonly used children’s dictionaries, in print and online, including those published by Houghton Mifflin Harcourt, Merriam-Webster, Scholastic, HarperCollins and the popular online tool offered by Yahoo! Kids. (Scholastic, HarperCollins and Yahoo! did not respond to Teaching Tolerance’s request for an interview.) The survey also included Dictionary.com, even though it is not strictly a children’s dictionary, because it is frequently used in schools.

For example: In almost every dictionary, race was defined as a biological phenomenon, based on what a person looks like, with little reference to race as a construct with social and political implications. Racism was usually defined as a personal attitude, without acknowledging cultural structures that promote it.

The terms gay and homosexual, when mentioned at all, were almost always defined in purely sexual terms, with no reference to families or the many nonsexual components of intimate relationships.

Although most dictionaries included ethnic to describe things like customs or restaurants, the idea of ethnicity as an element of people’s personal identities was almost completely absent.

The word gender was almost always presented in binary terms (“you’re either a boy or girl”) and equated with biology (“your gender is how you were born”). This runs contrary to current understandings that a person’s gender is more of a societal description, as distinct from a person’s sex, which is rooted in biology.

“We all have built-in assumptions about the world and other people, based on how we first understand words,” Scharf said. Incomplete or missing definitions, she added, “can make it more difficult to do the kind of awareness-raising work around these issues that a lot of us want to do.” 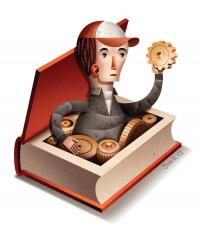 Not an ‘easy fix’

The challenges to children’s dictionary publishers can be steep.

First, there is the rule that definitions should only include terms that are also found in the same dictionary. Says American Heritage’s Kleinedler: “How do you define complicated terms in a way that doesn’t require the inclusion of a ton of supporting language? If you word things a certain way, it requires changes to so many other definitions. It becomes a domino effect.”

Then there is the fact that children’s reference materials aren’t updated as frequently as adult volumes—often because sales numbers don’t demand it. As a result, their content can sometimes lag behind the rapidly changing language in a high-tech culture.

Merriam-Webster’s Collegiate Dictionary, for example, is updated each year. The company would like to update its children’s volumes every two years—a mark they’ve hit with their intermediate and high school volumes, though not with those for younger readers.

Merriam-Webster editors decide how to revise the children’s editions based on recent changes to the collegiate volume—things like new words, evolving definitions and terms flagged as disparaging. Usage notes allow editors to explain historical changes in a word’s meaning. “Like the term midget,” said Linda Wood, senior editor for Merriam-Webster’s four-volume K-12 dictionary line. “Kids will come across these words in classic literature. We want to make sure they understand, ‘In the past this was used, but now some people consider it offensive.’”

Wood acknowledges that her staff is “probably more cautious with the children’s dictionaries.” But, she says, “A word wouldn’t be excluded on the basis of content. If it’s something students would come across in their readings, it should be included.”

However, that might be hard to judge—and not all teachers or parents would agree with the result. For example, Merriam-Webster’s elementary-age dictionary omits homosexual and heterosexual, Wood explained, “because we don’t feel like those words are a part of the vocabulary students are using for schoolwork.

Sometimes, too, the logistics of printing books can make longer, more nuanced definitions a challenge. Both Merriam-Webster and American Heritage editors pointed to the large type size required for younger readers. “There is only so much you can fit in a children’s book,” Kleinedler said.

“I don’t think this is a quick and easy thing to fix,” Scharf said. “This is the important take-away: When defining these terms, the dictionary should just be the beginning. It’s about having a deeper conversation, so that kids learn how to thoroughly examine what words really mean.”

For its part, the American Heritage Children’s Dictionary will get a minor update in a couple of years and a new edition around 2019.

When a word is in dispute, teachers often confer authority on the dictionary, telling young children to “look it up.” Yet many important dictionary entries seriously miss the mark and reflect outdated information and social ideas in their definitions. Because they’re “authoritative,” they can reinforce prejudice instead of challenging it.

Race
The concept of race is a human invention with no basis in genetic biology. However, children’s dictionaries often treat it solely as a biological construct, ignoring social factors. Scholastic’s definition below implies this biological basis and makes no mention of cultural forces; Webster’s goes further and ties race to blood type, hair color, etc.

Scholastic Children’s Dictionary: “One of the major groups into which human beings can be divided. People of the same race have similar physical characteristics, such as skin color, which are passed on from generation to generation.”

Webster’s New World Children’s Dictionary: “A large group of people who have certain physical features in common. The type of blood and the color of hair and skin are some of these features that are passed on from one generation to another.”

Gay
Some children’s dictionaries acknowledge the current usage of gay; others ignore it. This widely used term, which adults know describes same-sex attraction (and usually refers specifically to men) is often used by young people as a general put-down. Here’s how some dictionaries handle it:

Yahoo! Kids (online): “Of, relating to, or having a sexual orientation to persons of the same sex. Showing or characterized by cheerfulness and lighthearted excitement; merry. Bright or lively, especially in color; given to social pleasures. Dissolute; licentious.”

Gender refers to the social roles, behaviors and traits that a society may assign to men (masculine) or to women (feminine). Some dictionaries, like DK Merriam-Webster, confuse it with sex, which is rooted in biology.

American Heritage Children’s Dictionary: “The condition of being male or female, especially as a way of appearing or behaving in accordance with a society’s customs.”

DK-Merriam Webster Children’s Dictionary: “The state of being male or female: sex.”

Atheism is simply a lack of a belief in a god or gods. It is not a religion or doctrine, and it has no bearing on the ability to be moral. However, some children’s dictionaries do not make these important distinctions.

Yahoo! Kids (online): “Disbelief in or denial of the existence of God or gods. The doctrine that there is no God or gods. Godlessness; immorality.”

This is an outdated term that is no longer used by health professionals or the federal government. This is not reflected in some definitions. (This survey includes Dictionary.com, even though it is not strictly a children’s dictionary, because it is frequently used in schools.)

Dictionary.com: “1. Characterized by retardation: a retarded child. 2. Mentally retarded persons collectively (usually preceded by the): new schools for the retarded. Slang: Disparaging. A mentally retarded person. A person who is stupid, obtuse, or ineffective in some way: a hopeless social retard.”

Children’s dictionaries have the power to shape how kids see the world. Be sure yours promotes tolerance.
Bookmark This PageSave