Hate in the Hallways

Recognizing the history of defamatory symbols can help schools see fewer of them.
Marilyn Elias
Issue 49, Spring 2015
Bookmarked 15 times
Illustration by Lincoln Agnew
Add to a Learning Plan
X
Add to an Existing Learning Plan
START A NEW LEARNING PLAN
All articles from this issue
Print

Two pink swastikas and a racist epithet are painted on the entrance to Martin Avenue Elementary School in Bellmore, New York.

Students at a Springfield, Missouri, high school defy school policy by wearing T-shirts bearing the Confederate flag to memorialize a recently deceased classmate who had embraced the flag as part of his Southern heritage.

A private Islamic school in Bellevue, Washington, is vandalized repeatedly with hateful graffiti, leading some parents to feel their children are not safe on campus.

It is impossible to know exactly how many incidents of hateful graffiti and other defamatory behavior occur in schools every year—but they do, in schools and communities of every size, location and description. Whether it’s someone scrawling a swastika on a locker or kids coming to school in blackface for Halloween, school leaders struggle with how to react constructively when students denigrate or vilify the identities of other students through images or symbols.

Disagreement over how to respond to hateful symbols often stems from ignorance about how much children are really affected by these incidents. The fact is, encounters with hostile graffiti in the school environment can significantly hinder students’ mental health and academic progress, reports child psychologist Lori Evans, Ph.D., of the Child Study Center at New York University Langone Medical Center. If a student identifies as part of a targeted group—be it racial, religious or LGBT-identified—these experiences can trigger anxiety and depression, even in children with no prior mental health issues, says Evans. “We’ve seen these kids here. Unless the school reacts in a way that ensures the school community is behind him and he’s safe, he can feel very intimidated.”

Some school staff may wish to keep hateful graffiti incidents as low profile as possible, disciplining the offenders (if they can be found) and moving on quickly. The choice to respond this way means that the adults responsible for the safety of all students never acknowledge the role identity played in the incident. The targeted students—and others belonging to targeted identity groups—receive the message that returning to business as usual is more important than providing them a safe place to learn. In addition, the opportunity to educate the offending students is lost.

But many educators and students realize neither the horrific origin of some of these symbols and words, nor how they’re used now to sow hatred and intimidation. Here are some examples of hate symbols that commonly appear in schools, with a descriptions of their history and current usage. 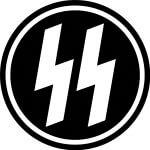 Two slanted vertical bolts, popular emblems of current white supremacist  groups, originally were the symbol of Hitler’s bodyguards. They grew to  represent “an unholy trinity, the worst aspects of Nazism,” according to Mark  Pitcavage, Ph.D., director of investigative research for the Anti-Defamation  League. The emblems were worn by concentration camp guards, Waffen-SS  (the elite military units) and the Gestapo (Hitler’s secret police). 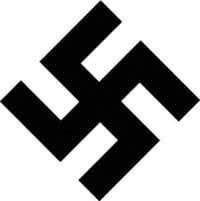 Linked historically to many different cultures and religions—Buddhist, Hindu, Native American—with varied spiritual meanings, the swastika became the  insignia of right-wing German nationalists in the early 20th century. Nazis  then embraced it in the 1920s, and it became the major symbol of Nazi Germany. It’s a trademark of neo-Nazi groups worldwide.

Tracy Hobbs tells of an incident at Lake Orion High School in Lake Orion, Michigan, that illustrates how a whole school can be marshaled in healing from hateful acts.

He was a faculty advisor for the school’s gay-straight alliance when someone broke into the club’s campus showcase and stole its rainbow flag. Later that day, the flag appeared in a common area, shredded, and marked with the words “Fags must die.” The principal had it removed immediately and then met with concerned students and the faculty advisers. They set up a table in the commons the next day, decorated it with rainbow balloons and distributed pledge cards reading, “I do not tolerate hate at my school.”

More than 700 students signed the cards. The two students who defaced the flag were caught and suspended, but the bigger lesson was that their classmates overwhelmingly rejected their bigotry.

One of many flags used by Southern soldiers during the Civil War, the flag known as the Southern Cross emerged as the most popular and became the key symbol of the Confederacy. After the war, it was an icon of  Southern pride. At  the 1948  breakaway Dixiecrat political convention favoring  segregation, the flag became the group’s informal banner  and then became linked with the battle against racial  integration, according to The Confederate Battle Flag:  America’s Most Embattled Emblem by

John M. Coski.  Some Southern residents still use the Confederate flag to honor their heritage, says Pitcavage, “but they may not understand the offensive effect this flag has on people.  The Confederacy was formed in order to protect and  maintain the institution of slavery.” The flag is currently used by the Ku Klux Klan; the white supremacist Council of Conservative Citizens (which has referred to African Americans as “a retrograde species of humanity”); and the League of the South (which advocates for a second Southern secession and a Christian theocratic society dominated by European Americans).

After the Civil War ended slavery, lynching became a key tactic whites supremacists used to intimidate and attempt to control African Americans, especially in southern and border states. Lynchings were ostensibly perpetrated against individuals who had committed crimes, although the charges were largely fabricated. The true intent of these often public acts of torture and murder was not to pursue justice but to send the message that African Americans were unsafe and unprotected in their communities, and that just being black was punishable by death. Between 1882 and 1951, an estimated 4,730 people were lynched in the United States (many sources argue that the actual number is much higher); the vast majority were African American. White individuals were rarely sentenced for their participation in lynchings and, if so, were usually pardoned. Lynchings peaked in 1892, but continued well into the 1980s. 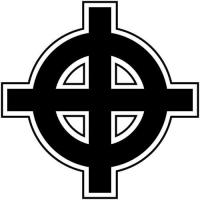 The sudden appearance of hateful graffiti or symbols can present a learning opportunity for the whole school community. Clear information about how to identify the symbol and what it means promptly given to staff, students and parents—perhaps even posted on the school website—can quell rumors and speculation. Recurrent or particularly dramatic incidents may merit a press conference.

Even very young children should understand what has happened in the wake of a symbolic hate incident, says Frances Bennett, principal at Martin Avenue Elementary. Teachers should assess how much the students already know and explain why what they saw was inappropriate. “We go into the historic aspects for older kids,” says Bennett. She talks to the child who created the symbol, explaining why it’s hurtful, and always calls in parents. “They may say, ‘Oh, he didn’t mean it in that way.’ But I make sure parents know the seriousness of this, and that as the child moves on, it could get more serious.” The North Bellmore Public Schools district has a character education program that focuses on a different character trait each month; Bennett points outs that hate symbol incidents can often prompt “teachable moments” anchored to a character trait the students have studied.

School psychologist Tracy Hobbs agrees that, when hate symbols surface, capitalizing on teachable moments in the short term translates into prevention in the long term.

“If you discipline a kid, it’s affecting that kid,” says Hobbs. “If you turn it into a teaching moment and educate the whole student body about something, you can affect everyone.”

Help your students counteract hate with symbols that express compassion and justice.

Don’t wait to find hateful graffiti before making a response plan. Teaching Tolerance’s publication Responding to Hate and Bias at School can help you be proactive before, during and after such an incident.