What happens to students when community schools close their doors?
Sean McCollum
Issue 52, Spring 2016
Illustration by Eva Vázquez
Add to a Learning Plan
X
Add to an Existing Learning Plan
START A NEW LEARNING PLAN
All articles from this issue
Print

In January 2010, the architects of Cleveland Metropolitan School District’s Academic Transformation Plan dropped the bomb on the students and staff of East High School. The school, along with 17 others, was slated for closure as part of the sweeping reform initiative. The rationales: poor academic performance, declining enrollment and the district’s $53 million budget shortfall.

Raymond Cooke—the last senior class president the 110-year-old school would ever have—took the news hard. “It was a very emotional time for us; heartbreaking and depressing,” he says. “It was like being put out of your home.”

Cooke, his classmates and other community members attended district meetings about the proposed closure, but he got the impression that the meetings were little more than public displays of sympathy put on by officials. “We didn’t have a voice,” he says. “The blame [for closing East High] was put on us.”

The fate of Cooke’s alma mater is playing out again and again in low-income neighborhoods across the country. Closing “underperforming” public schools—rather than restructuring or funneling resources toward them—is one piece of the puzzle. In a growing number of communities, promoting publicly funded but privately managed charter schools to replace them is another piece. But researchers are now questioning this one-two approach to urban school reform. A grassroots movement of students, families, educators and community members is organizing locally and nationally to defend their rights as decision makers for schools that have long provided identity and stability for their neighborhoods.

More Than a School

Cooke remembers his school as more than a daytime place of learning. It was a community hub, polling place and a site for health and art fairs. It had a newly renovated gym, a culinary arts facility and a beautiful atrium.

“I was one of those strange kids who wanted to come back someday and walk into my old classrooms,” Cooke says. “I wanted to be a role model for the students who came after me.” Part of his deep disappointment with the closure of East High was losing the chance to give back to a place that had been a community cornerstone.

“When a neighborhood loses its schools, it also loses an institution that builds relationships among local residents and binds generations, while it serves local children,” writes Elaine Simon in The Notebook, a watchdog newspaper serving Philadelphia Public Schools. Simon, co-director of the Urban Studies Program at the University of Pennsylvania, has researched Philadelphia’s school-reform efforts for three decades. “Losing schools makes it all the more likely that these neighborhoods will deteriorate further.”

School closures are part of the reform agenda in dozens of major U.S. cities. The vast majority of closures have taken place in black and brown neighborhoods, communities with limited economic and political clout and high rates of poverty. Most targeted schools are struggling with overwhelming needs that extend far beyond the classroom.

Advocates of school closures point to test scores and academic achievement gaps as evidence of failure. Policymakers often blame school employees—specifically the teachers—for low test scores. This posture is at least as cynical as it is “decontextualized,” says social psychologist Anne Galletta, a professor at Cleveland State University and member of a research collective looking at the consequences of school closures in the city. One example of the missing context is that teachers in these under-resourced schools are often coping with high percentages of English language learners and students with special needs. As education activist Jitu Brown, national director of Journey for Justice Alliance, stated in a speech he made during the battle to save Dyett High School in Chicago: “We’re tired of our children and our communities being demonized and being blamed for being underserved.”

Galletta agrees. “We’ve got to go beyond high-stakes standardized test scores as the sole measure of improvement,” she says. “We’ve got to look at the lives of youth, their families and the neighborhoods in which they live.” 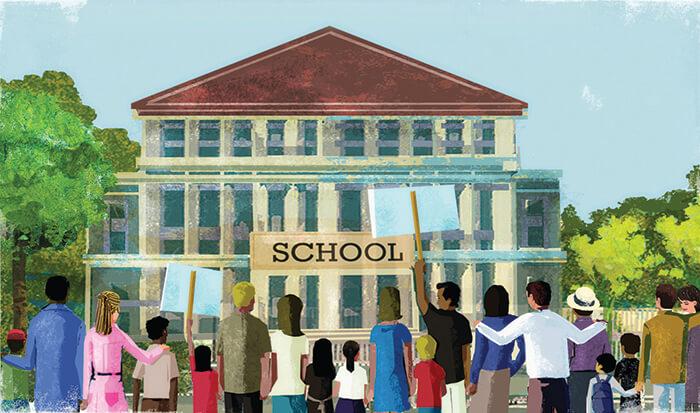 Troubling to Galletta, Brown and other critics of school closures is the willingness of policymakers to ignore local voices in favor of promising reform narratives that often prove false.

One of the reasons most frequently given for closing schools is that closures save money, but evidence to the contrary is mounting. In 2013, officials in Chicago Public Schools admitted to overstating their savings from school closures by at least $122 million. In Washington, D.C., school closings cost the district $40 million—four times as much as had been estimated. In many cities, securing and maintaining unsold school properties are adding to budgetary woes.

Another justification for school closures is the need to improve student performance, but this outcome isn’t guaranteed either. There is no clear evidence to indicate that schools receiving students displaced by closures have better academic track records than the schools that close. A study, conducted by Matthew F. Larsen at the Education Research Alliance for New Orleans, indicates that most students from closed schools experience “negative shock,” resulting in lower attendance, lower GPAs, and lower chances of graduating.

Transferring to a charter school doesn’t cause a magic turnabout in academic performance either. The Evaluation of Charter School Impacts, a large-scale study commissioned by the U.S. Department of Education and conducted by Mathematica, compared students who were accepted into charter middle schools with an equivalent sample of students who applied to the same schools but were not selected and, instead, enrolled in their district middle schools. The study found little or no significant academic benefit related to charter school attendance.

The aggressiveness of urban school reform plans has caught many communities and school districts off guard in the past, but a growing number of families, students, educators and community leaders are taking up the cause of school closure and organizing for alternative outcomes.

Nationally, advocacy groups are shining more light on how sweeping reforms such as school closures are specifically targeting under-resourced communities and contributing to the resegregation of U.S. schools in the process. The Alliance to Reclaim Our Schools, the Journey for Justice Alliance and the National Opportunity to Learn Campaign are three organizations advocating for greater equity in education and offering information and support to local activists.

You have to be aware and ask a lot of questions, because those planning to close it will not be transparent about [their motives]. This is your community. You have to be prepared.

The struggle to fight school closures is occurring on two main fronts. The first involves preventive efforts to block district takeovers by city and state officials and re-establish local control. The second involves activism at local levels once school closures have been set in motion. In 2013, 9-year-old Asean Johnson’s spirited defense of his Chicago grade school went viral online. “You should be supporting these schools not closing them,” Asean said. “You should not be closing these schools without walking into them and seeing what is happening in these schools! Education is our right, that is why we have to fight!” Asean’s speech was credited with helping get his school removed from the closures list. In 2015, hunger strikers on Chicago’s South Side were unable to prevent the closure of Dyett High School (although the school is slated to eventually reopen as an open-enrollment school with the same name). However, the strikers brought national attention to the issue of school closures and their disproportionate impact on communities of color.

After the Doors Close

Once a neighborhood school is closed, it is easy for a community to feel defeated, as Cooke can attest. But local educators and families can still do a great deal to ease the transition for displaced students as they prepare to attend new, unfamiliar schools.

As Galletta notes, some students transitioning from closed schools experience a fresh start, but many more experience grief and loss that affect their personal lives and academic performance. Efforts to help these uprooted students transition must be focused largely on the receiving schools, which—in too many instances—do not receive adequate support as they prepare for the influx. Leaders throughout the receiving school and the community at large may have to be proactive and persistent to ensure that displaced students are welcomed, safe and supported in their new environment so their minds can adjust and return to learning.

Ideally, receiving schools will host orientation sessions before the first day of school to respond to the questions and concerns of new students and their families and help the students prepare for the pending change. School officials should also attend to transportation requirements and have plans in place to avoid long or unsafe routes and untenable transportation costs for families of displaced students, Galletta says. Emotional, psychological and academic supports should be in place too. These recommendations are more than just “best practices.” Without them, students may literally disappear from the public education system. After the 2013 closure of 24 public schools in Philadelphia, some 600 students remained unaccounted for after the transition.

According to East High's last senior class president, two key things must happen before a closure to protect neighborhood schools: Stakeholders must build community awareness and organize at the grassroots level to make the case that preserving and improving the existing school is best for students.

“You have to be as involved as possible in the policymaking," Cooke says. "You have to be aware and ask a lot of questions, because those planning to close it will not be transparent about [their motives]. This is your community. You have to be prepared.”

The Rise of EMOs

The largest EMOs are well-funded and politically connected business ventures that are backed by such groups as the Walton Family Foundation, the Bill and Melinda Gates Foundation and the Broad Foundation. Venture capitalists and hedge-fund managers are also investing in what they see as the future of public education—privately run schools funded with public money. The advocacy and lobbying arms of some EMOs have donated tens of millions of dollars in campaign funds to gain the support of candidates in both major parties.

Today, more than 6,000 public charter schools are operating in 42 states and the District of Columbia, educating an estimated 2.5 million students. Most are small, locally controlled charters that operate with great integrity. But the percentage of charters operating under EMOs is growing.

Is your charter school or school district considering contracting with an EMO? If so, read Public Accountability for Charter Schools by the Annenberg Institute for School Reform. It outlines seven standards and recommendations for greater transparency and accountability.

Equip yourself with these key facts about school closures.