Why are there so few girls in computer science? And how can we change that?
Alice Pettway
Issue 52, Spring 2016
Bookmarked 6 times
Illustration by Katy Lemay
Add to a Learning Plan
X
Add to an Existing Learning Plan
START A NEW LEARNING PLAN
All articles from this issue
Print

In September 2015, New York City Mayor Bill de Blasio announced that within 10 years every child in the city would be able to study computer science in a public school. The decree came as no surprise. Nationwide, educators are coming to the consensus that computer science literacy is beneficial—even necessary—for students to succeed in a digitized world. Writes Alison Derbenwick Miller on the technology blog TechCrunch: “With the shift to data-based decision-making for everything from traditional business marketing to local government and health care, a basic understanding of how computers work and process information, as well as a basic literacy in computer programming and data analysis, are rapidly becoming workplace essentials.”

Unfortunately, these essentials are harder to come by for some students than for others. Low-income communities are more likely to be technology deserts, disproportionately leaving behind students of color and English language learners. And, despite the growing number of computer science programs in public schools (including traditional classes and coding “boot camps”), another group of students is conspicuously absent: girls.

The disconnect between girls and computer science doesn’t improve after high school. In the last two decades, the percentage of U.S. computer science bachelor’s degrees awarded to women has fallen from 28 to just 18. According to the National Science Foundation, only 25 percent of computer and math scientists are women.

It’s clear that some combination of factors is discouraging girls from pursuing computer science opportunities, and equity-minded educators are trying to figure out what these factors are—and how the K-12 education system can help overcome them.

In recent years, coding has become a buzzword in discussions about closing the gender gap in computer science. Organizations such as Code.org, Girls Who Code, CodeHS and Codecademy offer courses and camps ideal for the girl who’s already poring over lines of code—or wishing she could. Given the prevalence of the word, Code.org’s chief academic officer, Pat Yongpradit, says it isn’t unreasonable that many people jump to the conclusion that equitable computer science education is all about the code.

But that isn’t the case, at least for Code.org, he says. “They think that we’re trying to create more … professional coders, programmers who work for Google and Microsoft … and that’s just false.” Yongpradit says he and his fellow educators at Code.org hope instead to create a “citizenry” that is able to apply computer science literacy to a broad range of professional pursuits.

Adriane Bradberry, communications director at the National Center for Women & Information Technology, believes that this holistic approach is the most effective for engaging young women. She says there is nothing wrong with coding—especially for girls who already know they are interested in a programming career—but she emphasizes the danger of focusing too strongly on only one aspect of computer science education.

“Solving this problem of underrepresentation doesn’t come from looking at one particular part [of computer science diversity issues] at one particular time,” she says. “It’s an ongoing process that should always be in the back of everyone’s mind. That’s how we’ll start to increase the meaningful participation of women.”

Another reason not to focus exclusively on coding is that women aren’t underrepresented only in programming jobs; their numbers are low across the entire field. This, in part, says Bradberry, is because girls might not have had opportunities to realize how their interests align with different computer science careers. The most effective way to provide these opportunities is to expose girls to computer science early. Since most K-12 computer science classes, workshops and afterschool programs are electives, recruiting is paramount.

In 2014, Google released a report on the factors that motivate girls to pursue computer science. The study found that encouragement, career perceptions, self-perception and academic exposure account for 95 percent of a girl’s decision to pursue this career path. 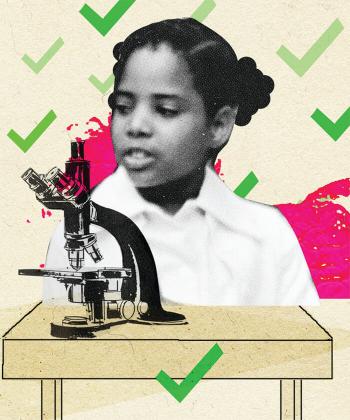 Often, it’s small things that undermine efforts to engage girls with computer science. The good news is that these pitfalls can be avoided with purposeful planning. “We’re all biased; we’re all human,” says Bradberry. “It’s often unconscious, however, [and] once you start to understand how to recognize when you’re being biased, you can definitely take actions to mitigate those factors.”

Some problems are easy to watch out for, says Bradberry. Recruitment and classroom materials that use inadvertently gender-biased language or imagery that is perceived as stereotypically masculine can discourage girls from joining in. Using gender-biased language—for example, defaulting to male pronouns or referring to students as guys—may seem like an obvious problem, but it happens. The faces featured in textbooks and on classroom walls should be gender-inclusive. Educators should also be mindful of using superlative language or highly technical jargon that might be intimidating to students who don’t have much experience with computer science yet.

But being more gender-inclusive is not just about auditing materials or changing language usage, says Bradberry. Computer science instructors need to think about each girl as an individual and, if she’s reluctant, help her see how computer science can help her meet her goals or explore her interests. “A girl [who’s] interested in wanting to build an app may differ from a girl or woman who’s wanting to improve hardware for … people who are blind, for example,” Bradberry says.

This lack of confidence can cause female students to withdraw from class discussions and activities or, worse, to drop out of computer science classes altogether. While certainly not the only method, one of the most effective ways to raise girls’ confidence levels is simple and easy to implement: positive feedback.

In ScriptEd’s training program, volunteers are trained to pay special attention to when and how they call on girls and to provide positive verbal feedback. “Little reminders that ‘You’re really good at this’ and ‘You can do this’ are tremendously helpful when you’re working with young women to build their confidence,” says Couvares. ScriptEd’s approach is working: Eighty-four percent of ScriptEd students report feeling more confident after a year in the program.

How to Choose a Computer Science Partner Organization

Every school has different resources and challenges, and there isn’t a one-size-fits-all computer science solution. These questions can help you get started finding the right program for your school.

Does the organization specifically focus on equity? If so, how successful has it been?

If the organization doesn’t have an outreach plan to recruit girls and other underrepresented students at your school, consider another option.

What technology will the organization use in the classroom?

From Classroom to Career

Some young women who become computer science literate will move into a variety of nontechnical careers armed with an understanding of how they can use devices and data to further their professional goals. Some will pursue careers in the computer science arena. These young women will need additional support as they break into education and professional worlds that are still overwhelmingly male.

To that end, some organizations (including ScriptEd) focus their efforts on opening pathways from K-12 education to professional opportunities, such as internships. ScriptEd places students in programming internships with American Express, Getty Images and About.com, among other companies, giving them opportunities to network and learn in real-world settings.

Samantha Malave, a graduate of ScriptEd’s programming class, is now an intern with one of the organization’s internship partner companies. She has little patience for those who would exclude her from computer science because she’s a woman.

“Social constructs to me are prohibiting to one’s passion,” she says. “No matter how society feels or thinks, one should strive to always be vocal about things they love.”

Despite her obvious dedication, Malave says there’s no way she would have landed her internship without ScriptEd’s help. She says that, without the organization, she would have “packed my bags and just taken my knowledge elsewhere.”

That’s exactly what many young women are currently doing—but educators have a chance to change that. With purposeful recruiting and retainment, schools can open new avenues for girls to achieve their goals in a computer science world that needs their talents.

Computer Science for ALL Girls

It isn’t just gender that can affect a student’s odds of being included in computer science education. Young women of color and students with disabilities face additional challenges. These targeted resources from the National Center for Women & Information Technology can help educators create a learning environment that is welcoming to all girls.

A Spanish-language website chock-full of resources for young Latina women.

A national initiative to raise awareness among young Latinas and their families about opportunities and careers in technology.

Check out these resources for more recommendations about cultivating an inclusive computer science industry.

Have your students seen the hashtag #ilooklikeanengineer? It’s trending, and the posts are great mini-empowerment lessons for anyone who isn’t sure if she or he belongs in a STEM field.