After witnessing the rise of the “alt-right,” this social studies teacher doubled down on debunking Confederacy myths.
Tyler Murphy
Issue 58, Spring 2018
Illustration by Michael Waraksa
Teach This in a Learning Plan
X
Add to an Existing Learning Plan
START A NEW LEARNING PLAN
Bookmark States' Rights and "Historical Malpractice"
Print 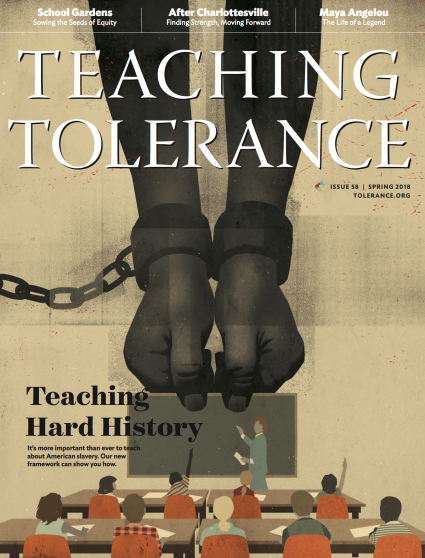 There are times in our history when cataclysmic moments are propelled into the classroom: The attack on Pearl Harbor, the assassination of John F. Kennedy and the September 11 attacks are obvious examples. There are other times, however, when subtle tremors that teachers may notice in the classroom are suddenly and dramatically magnified into cataclysmic moments outside the classroom. The deadly “Unite the Right” white nationalist rally that shook the city of Charlottesville, Virginia, in August 2017 is one such moment.

The event sparked self-reflection and action across the country, including in my home state of Kentucky. In the aftermath of the incident, leaders in Lexington decided to remove two Confederate statues, including one that loomed on the site of an auction block once used to buy and sell enslaved people. But our Commonwealth—a state that Lincoln struggled to keep in the Union—continues to grapple with the presence of another statue, one that stands in Kentucky’s Capitol Rotunda: that of Jefferson Davis, the first and last president of the Confederate States of America.

Although Davis still stands (for now), Kentucky’s Historic Properties Advisory Commission did vote unanimously to remove a plaque on the statute that deems him a “Patriot, Hero, Statesman.” As DeBraun Thomas, an organizer of the movement to remove the Lexington statues, notes, “someone who defects from their country” most certainly does not warrant those descriptors.

What we cannot remove, though, is the reality that Davis presided over a political system rooted firmly and resolutely in the institution of slavery. As much as revisionists would like to reframe the Civil War as a battle for the elusive idea of states’ rights, the historical evidence makes it clear that the Confederate cause was synonymous with racial subjugation. Alabama’s constitution under the Confederacy explicitly refers to the “Southern Slaveholding Confederacy.”

The states’ rights argument has lingered for decades, in part because many Southerners don’t want to believe their relatives fought for slavery, but also because of the propaganda efforts of white nationalists and Confederate sympathizers who have rebranded the Confederate cause to make it more palatable to a contemporary audience. But the painful reality continues to bubble to the surface—as it did in Charlottesville—and it exposes this argument for what it is: a smokescreen for a white supremacist ideology.

Those of us who teach our nation’s history and perspectives on it should see the current political context as an opportunity and assess our role in addressing tremors of hate before they threaten to shake the foundations of our society. Indeed, the mindset that gave birth to the Charlottesville incident is not foreign to anyone who teaches history. This is especially true of teaching the Civil War—an era in U.S. history that foments discord even today, particularly in the South.

When I asked my students what they knew about the Civil War at the start of the school year, one replied that he was aware of it. When I pressed him for more, he replied, “It was a war between people who liked slavery and people who didn’t.” That was a proverbial “from the mouth of babes” moment.

Another student, however, immediately balked at this characterization. “No, no, no! It wasn’t just about slavery. There were other issues …” I braced for what I knew his next words would be: “It was also about states’ rights.”

That student is not alone. A 2015 McClatchy-Marist Poll revealed that 49 percent of Southerners believed that slavery was “not the main reason” for the Civil War. The number was high nationally as well: 41 percent.

Over the course of every school year, I watch as my students slowly realize that slavery was at the heart of the Civil War. This isn’t an effort to “brainwash” them or foster “white guilt” (a common refrain of white nationalists). Rather, students reach this conclusion as they analyze various primary sources from the time period and carefully examine the evidence.

To the extent that the rebel states advocated for their right to act independently, the students find, such language was couched in arguments specifically defending a state’s right to preserve slavery, even as abolitionist causes swept the rest of the country. Each of the 11 states that seceded from the Union composed sternly worded declarations or proclamations, all of which explicitly mentioned the desire to maintain the institution of slavery in their states. Several declarations expressed frustration that the fugitive-slave laws were not being sufficiently enforced in the North. They bemoaned the 1860 election of Abraham Lincoln. South Carolina’s General Assembly declared his election had been based on “open and avowed hostility.” Georgia’s secession document labeled Lincoln’s newly formed Republican Party the “anti-slavery” party. Former South Carolina Representative and delegate to South Carolina’s secession convention Laurence M. Keitt argued that the state had arrived at its decision to secede “on the question of slavery.” Jefferson Davis himself declared black people to be “our inferior, fitted expressly for servitude.”

If we truly want to honor our country’s history, we must recognize both the progress we have made and the work that remains undone.

Revealing the Monster of Slavery

Writing poignantly from the perspective of an observer at Lincoln’s Gettysburg Address, a student last year compared the issue of slavery to a “monster” that “was being built up [while] all of the people in power claimed they could not see it.” The monster grew so massive, the student surmised, as the issue was ignored by leaders (including, at first, Lincoln himself) until eventually it was “released to wreak havoc on the U.S.A.” The student’s fictional character found comfort that “we still [have] hope to tame that monster.” Allowing our students to draw such conclusions empowers and equips them to spot modern-day monsters and intervene before the consequences of indifference make those monsters nearly impossible to wrangle.

It is true that, in the beginning of his presidency, Lincoln’s priority was preservation of the Union and not the abolitionist cause. But as the war dragged on and became much deadlier than anticipated, his views evolved. Lincoln came to believe that preservation of the Union was dependent on the dissolution of slavery. Extending that idea even further after the bloodiest battle of the war, in his iconic Gettysburg Address he framed the war as a fight over the very ideals and values upon which the country was founded—casting the bloody conflict as a test of whether a nation “conceived in Liberty, and dedicated to the proposition that all men are created equal” could even survive. This moment marked a shift in the widespread interpretation of our country’s founding values and principles.

A close reading of the Gettysburg Address makes it very difficult to argue that the values and views of the Confederacy could be reconciled with the values and views that became widely accepted after the speech was delivered. To argue otherwise is historical malpractice; it ignores the ideals that define, if not the true character of the country, what we aspire to be as Americans.

The Power of Symbols

Symbols of the Confederacy, be they flags or statues, don’t just represent a heritage or a romanticized past. They represent a system whose values and tenets run counter to the very freedoms that generations of people have struggled—and still struggle—to make manifest in the United States of America. And there are few places where being informed of that struggle is more important than in the realm of education, where a society is given its life, its merit and its guiding principles.

Symbols are important to Kentuckians—and to people in general­—especially when housed in the quintessential temple of our Commonwealth’s democracy. We can no longer ignore the imagery created when Jefferson Davis’ statue looms in the corner even as Abraham Lincoln’s takes center stage in Frankfort’s Capitol Rotunda—a place that should be reserved, as DeBraun Thomas says, for the celebration of our shared history.

The Union and its values of liberty and freedom survived a brutal civil war, but the hate, bigotry and terror of that divide still hover in our democracy’s shadows, and they threaten the values we claim to espouse. The struggle for justice did not end with the Union’s victory in the Civil War. That struggle endured through Reconstruction, Jim Crow and the civil rights era, and it endures today. Until we grapple with that reality inside and outside the classroom, the people who carried torches in Charlottesville will continue to be empowered by our indifference or by our willingness to perpetuate a false narrative—a narrative that allows our public spaces to house symbols that dehumanize so many of our citizens. And our students will be denied an opportunity to develop the prerequisite skills for maintaining a healthy democracy: critical thinking, perspective taking and discerning fact from fiction. If we truly want to honor our country’s history, we must recognize both the progress we have made and the work that remains undone.

The New Birth of Freedom

Lincoln spoke, over 150 years ago, of the “great task remaining before us” involving a “new birth of freedom.” And, as Howard Zinn reminds us, that new birth was made possible by the countless black abolitionists—many unnamed and unnoted in our history books—who “won their freedom because for 30 years before the Civil War, they participated in a great movement of resistance.”

But the monster looms and we, too, must heed those abolitionists’ examples of resistance.

Today, such is our “great task,” and the fight for freedom endures: It is the responsibility of each successive generation (and those of us who teach them) to preserve the Union, stoking not the flames of hate but nurturing the eternal youth and vigor of that freedom. Are we up to the task?

Murphy is a social studies teacher in Woodford County, Kentucky.

Put this story into action with this toolkit.

Login to join the conversation
I think this is a bit overstated. The Confederacy certainly didn’t set itself apart from the rest of the country regarding white supremacy. And to dismiss “states rights” as a diversion is to ignore a lot of history. One of the officers in the Confederacy was named “States Rights Gist.” This was his given name at birth, so states rights was an issue long before the WBTS. It was a strongly held Jeffersonian principle in the South, distinct from the Hamiltonian tradition that began to consume the North in the pre-war years. To add balance to the discussion I would refer you to the following lectures by a professor of political philosophy at Emory University. His is a more overall contextual approach to the moral challenge that slavery posed to both North and South, and how each responded to that challenge:
https://www.abbevilleinstitute.org/lectures/the-moral-challenge-of-slavery-and-confederate-emancipation/