The guiding principles behind the Black Lives Matter At School Week of Action can be an important frame through which to reimagine more liberatory educational spaces for Black children.
Coshandra Dillard
Issue 61, Spring 2019
Bookmarked 51 times
Illustration by Alleanna Harris
Add to a Learning Plan
X
Add to an Existing Learning Plan
START A NEW LEARNING PLAN
All articles from this issue
Print

It began in Seattle.

On a September morning at John Muir Elementary School, a group of black men stood at the entrance high-fiving students. Some of the men beat ancestral drums with wide smiles on their faces. Others wore Afrocentric clothing. They praised each child who approached the steps of the school.

The event, called Black Men Uniting to Change the Narrative, was organized to uplift black youth in the community surrounding John Muir. Teachers at the school—where students of color, half of whom are black, are in the majority—were eager to partner with the community group. They had focused on race and equity in their professional development for years; they were ready.

But the jubilant rally wasn’t just a celebration of the students. On this day, it was also an act of resistance against hate. Just hours before, the school had been threatened by people who’d learned that teachers at John Muir intended to wear “Black Lives Matter—We Stand Together” shirts. One person even sent a bomb threat.

But the school’s joy would not be contained. After local authorities confirmed there was no legitimate threat, community members showed up as planned, and John Muir teachers soon found that thousands of educators across the greater Seattle area stood in solidarity with their message.

In spite of the threats (or, perhaps, fueled by them), a local group of union teachers called Social Equity Educators (SEE) encouraged teachers in the district to follow John Muir’s lead and host a Black Lives Matter at School Day. On October 19, 2016, thousands of teachers wore Black Lives Matter shirts to school.

“It was clear that educators wanted to show their students how much we care for them,” Hagopian said. “That was an incredible eruption that showed there was a real urgency felt by educators to support their black students’ lives in the face of things like the dramatic, disproportionate discipline that exists in the Seattle schools and across the country, but also with so many examples of police brutality going unchecked.”

The Seattle action caught the attention of national media, which inspired Philadelphia teachers to plan a similar event. But they went a step further: Instead of one day, they organized a Week of Action in 2017. The idea continued to grow in places like Montpelier, Vermont, and Rochester, New York, before spreading to classrooms in more than 20 cities during the 2017–18 school year.

In 2019, the Week of Action is scheduled to begin on February 4. 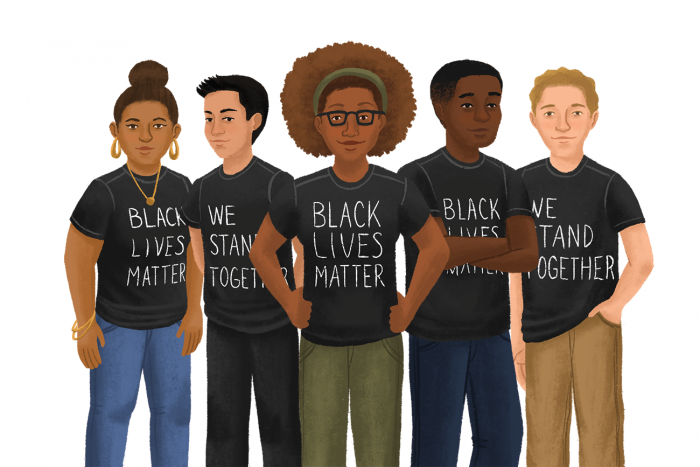 The Week of Action Blueprint

Black Lives Matter at School Week of Action is a time set aside to affirm all black identities by centering black voices, empowering students and teaching about black experiences beyond slavery. The lessons emphasize social justice and ethnic studies, but in addition to classroom work, teachers like Hagopian are organizing, planning, protesting and addressing real-world issues that affect black students.

“I think the pedagogy in the classroom is important, but it rings hollow if you’re telling your kids, ‘Here are the great movements for social and racial justice’ and engaging them in those conversations, but then not doing it yourself in your own life,” Hagopian says. “I think it’s incumbent upon social justice educators who are teaching this stuff to also live it, and that means getting involved with the Black Lives Matter at School movement, to get involved with the movements for structural change.”

In Washington, D.C., the nonprofit organization Teaching for Change and the Center for Inspired Teaching have convened a working group of teachers to plan the local Black Lives Matter Week of Action. They collaborate with the local Black Lives Matter chapter, BYP 100, and other activist groups. Teaching for Change staff suggest starting February off with more in-depth lessons about black history and black experiences, such as the lives of black Muslims in the United States and “Resistance 101”—tools that help students recognize their power by identifying with young activists throughout history. Educators can share ideas with their network and at curriculum fairs.

Teaching for Change Executive Director Deborah Menkart and Coordinator of Teacher Engagement and Professional Development Rosalie Reyes say they want to ensure all students have a positive racial identity that is visible to the world.

“I think one of the goals is that this does become the norm, that we shift the weight of the curriculum from the classroom … rethink some of the resources that we are using and that we’re making sure that the students are seeing themselves in their curriculum, in their literature,” Reyes says.

High school humanities teacher Charlie McGeehan is among a network of educators in Philadelphia that was moved by the energy brewing in Seattle. Teacher Action Group—Philadelphia and the Caucus of Working Educators, which had been working on racial justice issues, connected with Hagopian during their planning process. As a teacher who sees issues of economic inequality, mass incarceration and police brutality often arise in his classroom, McGeehan felt it was important to get on board.

As Reyes points out, students are more likely to engage in lessons when they see themselves reflected in the curriculum. According to a Stanford Graduate School of Education study, graduation rates dramatically increase for all students who take ethnic studies classes.

The education nonprofit Rethinking Schools published Teaching for Black Lives, a book that supports Week of Action teaching and learning efforts.  The editors of Teaching for Black Lives say the book is one way to offer that engagement. Editor Wayne Au, a professor at the School of Educational Studies at the University of Washington Bothell, said 4,000 books were sold in the first three months after it was published in April 2018, and that they’ve received orders and inquiries about the book from across the country.

Teaching for Black Lives is divided into five sections and covers topics like activism, black history, intersectional identities, anti-blackness, gentrification, the school-to-prison pipeline and mass incarceration. It fills in the gaps about key historical events and recognizes many black identities and narratives that students aren’t usually exposed to. For example, the book features issues rarely examined in traditional texts, such as the true history of the Black Panther Party and the FBI’s COINTELPRO campaign to dismantle black activist movements. The Color Purple—literature filled with intersectional identities—is used to connect to the #MeToo movement.

These lessons not only benefit black students but can also be transformative for nonblack students, particularly white students. Due in large part to school and residential segregation, white students often get a narrow view of blackness from their lived experiences.

I believe that once all folks start to respect and regard black people as human and as worthy of the respect and honor that other races sometimes see, then we all are going to benefit.

“I think [Teaching for Black Lives] has the potential to help win over students of all races and ethnicities to understanding the importance of supporting the struggle for black lives,” says Hagopian, who is also one of the editors. “As the founders of Black Lives Matter have said, ‘When black people get free, we all get free.’”

Editor Dyan Watson, an associate professor at Lewis & Clark Graduate School of Education in Portland, Oregon, agrees that the book’s content is valuable to nonblack students.

“When you systematically deny the dignity of one group, your dignity is also compromised,” she says. “So, I believe that once all folks start to respect and regard black people as human and as worthy of the respect and honor that other races sometimes see, then we all are going to benefit.”

McGeehan is like most teachers at Philadelphia public schools—white and teaching to mostly black students. He’s been instrumental in exemplifying to other white teachers the importance of anti-racist work in the classroom and organizing for the Week of Action.

But McGeehan knows that being an effective and empowering teacher for his students requires learning from and listening to them, their families and to members of his school community.

“As much as I probably wouldn’t admit it at the time, I do think that when I first came at teaching, I came at it from a savior complex perspective,” McGeehan says. “I do think that for white teachers, coming in with a savior complex and seeing students from a deficit perspective is a real, serious issue that takes a long time to break,” he continues. “I’m trying to think about what my ‘a-ha’ moment was, and I don’t know. I think it’s just been a long process, and it’s involved a lot of different types of learning.”

The Black Lives Matter at School Week of Action is a good time to reflect on how white teachers can teach about black lives more accurately and more empathetically. Wayne Au says they must go on their own journey to learn about the politics of whiteness and white supremacy. And Hagopian points out that thousands of educators around the country have their backs.

The Black Lives Matter movement is seen by some educators as a continuation of the civil rights era—a time when young people feel empowered enough to pick up where activists of the 1960s left off. Teachers know they can’t miss this pivotal moment in history, which is unfolding before our eyes daily.

Many teachers who do this work get a lot of support, but occasionally, there is pushback in the community or from a school administrator. Nonetheless, they continue advocating for equitable schools, rather than environments that mirror society’s inequities.

“There’s a whole lot more work to do, but I do think it’s a growing movement, [and] we know nothing changes unless there are people organizing and engaged,” Menkart says. “So, the fact that the Black Lives Matter Week of Action got so much support and is growing, the fact that there’s now the book Teaching for Black Lives, will really help give people the tools to make that possible.”

Black Lives Matter at School Week of Action is a movement sweeping across some of the country’s largest school districts. But you don’t have to live in a large city or be a member of an organization to join in this effort. The goal is to challenge structural and systemic racism while centering the lives of black students inside and outside of the classroom.

To join this effort, begin with these six steps:

Organizers are focusing on these 13 themes and have assigned them to specific days throughout the week:

Explore the themes of the 2019 Black Lives Matter Week of Action at School.

Login to join the conversation
The Seattle Education Association Center for Racial Equity website, which is referenced in this article and contains the lessons created but Seattle educators can be found here:
https://searacialequity.com/resources/blmweek/blm-curriculum/
Bookmark This PageSave