A Flaw in the Foundation

Like many products of the U.S. education system, I read The Scarlet Letter in high school. My English teacher practically danced around the classroom—she loved the story so much. I remember feeling conflicted. I knew some of my classmates had children. Others had unmarried mothers. The discussion felt unfair. I was left feeling dejected by a book that did not speak to me and by a lesson I knew could harm my classmates.

In that class, I learned something all teachers should understand:

“[S]chooling often asks children to be something or someone other than who they really are,” Gloria Ladson-Billings wrote in Crossing Over to Canaan: The Journey of New Teachers in Diverse Classrooms. “It asks them to use language other than the one they come to school with. It asks them to dismiss their community and cultural knowledge. It erases the things that the students hold dear.”

Years later, in my own teacher training and school leadership preparation, I didn’t learn the culturally relevant pedagogy and cultural consciousness that would have helped me preserve the things my students held dear. Instead, I was taught the one-size-fits-all approach to mathematics education that has historically and disproportionately harmed students of color. I spent my first year as a teacher fumbling through multiple strategies to best serve my students.

But when I begin them, I’m frequently met with students opening their laptops, pulling out their phones to text or just looking uninterested.

In most cases, I follow up to ask why they chose not to engage. I keep hearing the same responses:

“I thought math was a neutral content area. Why do we have to learn about culturally relevant pedagogy in this class?”

“It’s not my experience.”

“I was taught not to see color.”

We know there’s an overwhelming need for teachers who are willing to “see color,” who are committed to anti-racist pedagogy. And with over 1,200 institutions offering teacher preparation programs and countless alternative certification routes, the way these future teachers are prepared to educate the next generation can be a key contributor to systemic change. Unfortunately, far too often, teacher preparation programs maintain and support white supremacy culture—and sustain it in K-12 schools.

“Culture is powerful,” writes educator and social justice activist Tema Okun, “precisely because it is so present and at the same time so very difficult to name or identify.” In her essay “White Supremacy Culture,” Okun explores the ideology that constructs and justifies racist policies, practices and behaviors. White supremacy culture, she writes, appears in any organization that is not actively and effectively working to dismantle it. 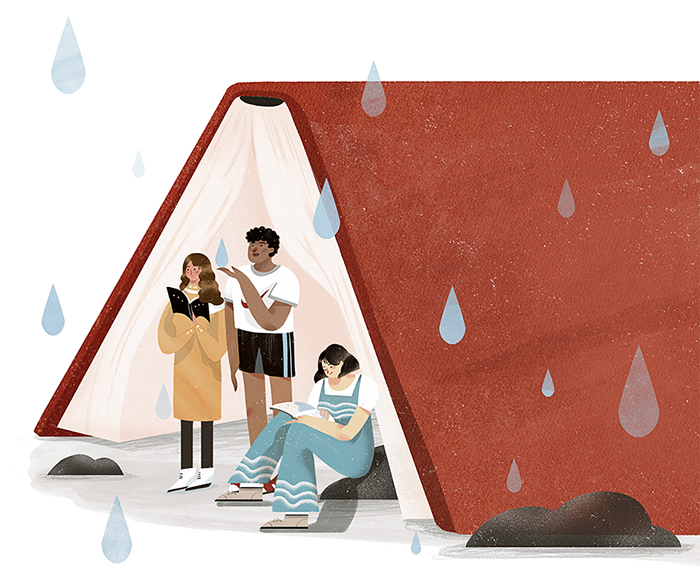 Across the United States, many in K-12 school communities are doing that work. Students are coming together to demand they be seen, heard and respected. Teachers are working to decolonize curricula and interrogate instructional resources. Parent and family organizations are supporting students, teachers and schools through these efforts. Rather than refuting the existence of white supremacy, educators are acknowledging how it is embedded into the fiber of our nation and our schools.

Teacher preparation programs can equip future educators with the knowledge and skills to provide positive learning experiences and environments for students of color. But first, they’ll need to acknowledge, examine and work to eradicate the white supremacy culture that exists within their own programs.

We were taught that green is a good color for our walls and that at least 20% of our walls should be bare. But we never discussed the practices that we see in the field and how they are rooted in white supremacist ideology.

The Cost of Comfort

While explicit curriculum may push back against racist or white supremacist systems, teacher preparation programs often train white preservice teachers to expect what Okun calls “a right to comfort.” A common characteristic of white supremacy culture, the right to comfort is the “belief that those with power have a right to emotional and psychological comfort.”

It’s important to note that the K-12 teacher population is largely white, middle-class and female. White supremacy culture, by definition, works to center that whiteness. And schools of education recenter it when they limit conversations about race and racism to certain courses.

In that way, not much has changed since 2001, when Ladson-Billings wrote, “Rather than dismantle the ‘tried and true’ practices, teacher educators believed that adding a course, a workshop or field experience on diversity would be sufficient to suggest that real change was occurring in the profession.”

Breana Thomas, an early childhood teacher resident at Clemson University, illustrates how conversations about race and racism are often pushed to the side. In graduate school, she says, she has had one course focused on classroom management.

“We were taught that green is a good color for our walls and that at least 20% of our walls should be bare,” Thomas said. “But we never discussed the practices that we see in the field and how they are rooted in white supremacist ideology.”

Marilyn Pugh, a third-year teacher in Dekalb County, Georgia, had an experience that was different but no better. “My teacher preparation program didn’t teach classroom management,” she said. “I figured it out.”

If future educators aren’t learning about the common disciplinary practices that disproportionately remove BIPOC students from classrooms; if they aren’t taught about the role of implicit bias and adultification bias on educator perceptions of student behavior; if they aren’t encouraged to trace the similarities between “zero tolerance” disciplinary policies and the “broken windows” approach to policing that has done so much damage in some communities of color, then the seeds of these racist practices can be planted even before preservice teachers complete their preparation programs.

Limiting or avoiding discussions of racism and white supremacy does a disservice to students and the teaching profession. There is no clear path to understanding how to educate BIPOC students if there is no understanding of the systemic barriers they face.

The Cost of Keeping the Peace

Closely aligned with the damaging expectation of a right to comfort is another characteristic of white supremacy culture: the “fear of open conflict.” This fear, Okun suggests, becomes evident when “people in power are scared of expressed conflict” and equate “the raising of difficult issues with being impolite, rude, or out of line.” 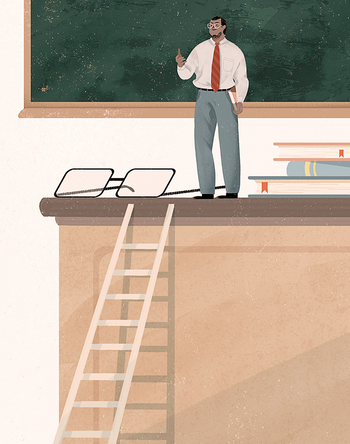 For some, this conflict avoidance goes so far that it shuts down an understanding of white supremacy before it can even begin. But educators who teach and normalize respectful disagreement are incorporating critical social emotional learning skills in their classrooms. And those who manage open conflict to stand up for their students demonstrate a form of bravery that needs to be recognized and appreciated.

I remember a time early in my teacher education career when a student approached me with a concern that brought her to tears. Earlier that day, following yet another police-related murder, she sat in a classroom while her mentor teacher shared her faith in the police officers in their town. The teacher told students they would always be safe if they complied with police.

I recall watching my own student struggle with not speaking up, not knowing how to speak up. She hurt for the students of color who had to wrestle with the conflicting statements from their teachers and their families. She knew they had seen the media coverage that showed their teacher was wrong. But she didn’t know what to do.

With no safety net, student teachers often see no way to challenge their mentors. That’s why university-school partnerships and clinical practice should go beyond the traditional role of providing student teachers with exposure. Instead of avoiding “uncomfortable” or “confrontational” discussions, teacher preparation programs should teach future educators how to advocate for their students. Current teachers, school leaders and district personnel should work alongside teacher educators to discuss what is happening in schools and in local districts.

How else can we ask future teachers to engage in an educational system we expect them to change?

Teacher education programs should weave the thread of race throughout the entire program.

Educators need support in teacher preparation programs so they can push back against white supremacy in K-12 schools.  Along with teaching content areas and instructional methodology, teacher preparation programs need to provide tools to critically interrogate curricula and school policies and practices. A racial justice lens—such as the one taught in critical race theory—would equip preservice educators to recognize and interrupt racist curricula and practices and to explore critical consciousness.

Blanding said he learned to approach his work with a racial equity lens through South Carolina State University’s Call Me MiSTER program. The program operates in 30 colleges and universities in and around South Carolina to increase the number of effective male teachers of color in schools across the nation.

It was gratifying, Blanding said, to unpack critical race theory and racial consciousness as future Black teachers and school leaders. Damian Williams, a fourth-year teacher and graduate of Clemson University’s Call Me MiSTER program, agreed. He attributed two courses led by Black instructors with his introduction to culturally relevant pedagogy.

“As the sole Black male in my classes,” Williams explained, “it made me so comfortable to see professors who looked like me be intentional about their approach to preparing us to be great teachers for all students.” Williams said it was in those courses that he first grasped a philosophical outlook for teaching.

Rather than refuting the existence of white supremacy, educators are acknowledging how it is embedded into the fiber of our nation and our schools.

Dr. Kristen Duncan, assistant professor of education at Clemson, believes a more holistic view of race in education is critical to better equip anti-racist future educators. “Teacher education programs should weave the thread of race throughout the entire program, to where race is discussed in every single aspect [of the work],” she explained.

The Indiana University-Purdue University Indianapolis (IUPUI) School of Education is one of the nation’s leading programs in education, culturally relevant pedagogy and developing anti-racist educators.

Dr. Tambra Jackson, dean of IUPUI’s School of Education, described the program’s philosophy: “Instead of viewing themselves as managers of students,” she said, “we encourage preservice teachers to establish classroom learning environments where students build community, establish clear expectations for socially acceptable behavior, self-regulate their own behavior and interactions. And for instances when socially accepted norms are violated, then there are restorative justice practices in place.”

IUPUI’s preservice teachers learn how equity affects all aspects of the work, from curriculum to classroom management—and they learn to work through discomfort so they can directly confront the ways white supremacy manifests in schools and classrooms.

As Jackson explained, “equity and anti-oppression are centered and threaded throughout the courses in our programs.”

That kind of reimagining is exactly what’s needed. White supremacy and racism are so deeply embedded in our education system that they will not be eradicated until everyone who wants to see change is ready to accept responsibility for enacting it.

We must recognize and dismantle the deep-rooted presence of white supremacy in our institutions of learning. This is the only way to build the safe, healthy and responsive schools that all students deserve.

Natalie Odom Pough
is visiting clinical assistant professor of education at Indiana University–Purdue University Indianapolis and a member of the Teaching Tolerance Advisory Board.
Add to a Learning Plan
X
Add to an Existing Learning Plan
START A NEW LEARNING PLAN
Print