On a Monday morning in September, ESL teacher Susan Azzu found she had a new student. Poh was entering the third grade. He was born in Thailand after his mother and sister escaped war and ethnic persecution in Myanmar. Through a refugee program, Poh had just arrived in Chapel Hill, N.C. He spoke no English.

Five miles down the road in a middle school, Hyun-Ju entered a classroom. Her family had relocated from Pittsburgh, so her father could teach at the local university. The teacher immediately paired her with a Chinese student and asked her to help translate, not realizing that Hyun-Ju’s grandparents were Korean or that she had been born in the United States and spoke only English.

Across town, Gao entered the 10th grade. His parents had come to the United States from China to work in his uncle’s restaurant. He didn’t speak much English, but he had been a good student in Beijing. At lunchtime, he was dismayed when other Chinese boys moved away from him. One boy eyed him, muttering “F.O.B” under his breath.

Who Is Asian American?

The term Asian American is a relatively new one. Yuji Ichioka, a pioneer in Asian American studies, coined the term in the early 1970s to help unify different Asian ethnic groups for political strength and study. But the meaning of the term can be elusive.

According to the U.S. Census Bureau, Asian refers to people having origins in East or Southeast Asia or the Indian subcontinent. Other definitions are broader and might include Iraq or Israel. In the 2000 Census, the U.S. government added the term NHPI for “Native Hawaiian and Other Pacific Islanders.” Combined, these groups include people from more than 18 countries of origin as well as numerous ethnic groups. In addition, about 15 percent of Asian Americans are of mixed race.

Historically, people of Asian descent have faced racial discrimination in the United States. The earliest Asian American immigrants were met with resistance and violence. Later, restrictive legislation, such as the Chinese Exclusion Act of 1882, was put in place to prevent Asian immigrants from entering the country. In 1945, while at war with Japan, the U.S. government incarcerated more than 110,000 people of Japanese ancestry in remote internment camps. Most of those people were U.S. citizens or legal residents who were forced to abandon their homes and businesses until the war ended.

These changing demographics are reflected in our classrooms. In 1970, 80 percent of American students were white. Today, that number is closer to 54 percent.

Asian American students bring with them unique and vibrant cultural backgrounds, but educators often assume that these students share similar circumstances or lump them in with other racial groups. Lack of individual acknowledgement can lead students to feel invisible in their own schools. “My teacher keeps giving me papers in Spanish,” says Joy, a Filipino American high school student in Los Angeles. “I don’t speak that language.”

In the media, Asian Americans are often stereotyped as nerds, scientists, office workers or martial artists speaking broken English—the “forever foreigner” with poor language and social skills. “The media perpetuates stereotypes and these messages sneak into the classroom,” says Dr. Nellie Tran, a social psychologist at the University of Massachusetts in Lowell.

No matter how long Asian American students have lived in the United States, they are inevitably asked, “Where are you from?” by people who assume they are not American. In reaction to this continual questioning, Asian American students may reject their home language, clothing, attitudes or behavior in order to appear more “American.” They may even choose not to associate with other members of the Asian community, particularly those who are new to the country.

Vanessa Leung, deputy director at the Coalition for Asian American Children and Families, describes the phenomenon: “We see struggles within the same ethnic groups … often it’s second- or third-generation vs. new immigrants.” The expression Gao encountered in the cafeteria, ‘F.O.B.,’ is a derogatory term referring to new immigrants who are “fresh off the boat.”

Seemingly positive, but just as harmful, is the myth that all Asian-Americans are high-achieving, hardworking, quiet and nonconfrontational members of a “model minority” that has overcome the challenges of immigration and minority status.

This misconception can cause teachers to assume Asian American students do not need academic, social or emotional support. According to Leung, “The myth of the model minority is that these kids will all do well, but we know that so many kids are struggling. In fact, there’s a huge achievement gap within [the Asian American] community.” Leung sees Asian American students both excelling and dropping out of high school. For those who struggle, the model-minority stereotype adds pressure to perform and makes students reluctant to ask for help.

Both the forever-foreign and model-minority stereotypes have a negative effect on students’ psychological and social well-being, particularly during adolescence, when a sense of ethnic identity is developing. Research that focuses specifically on Asian Americans has found racial bias affects self-esteem, causes psychological distress (including depression) and can affect the academic and social lives of students. 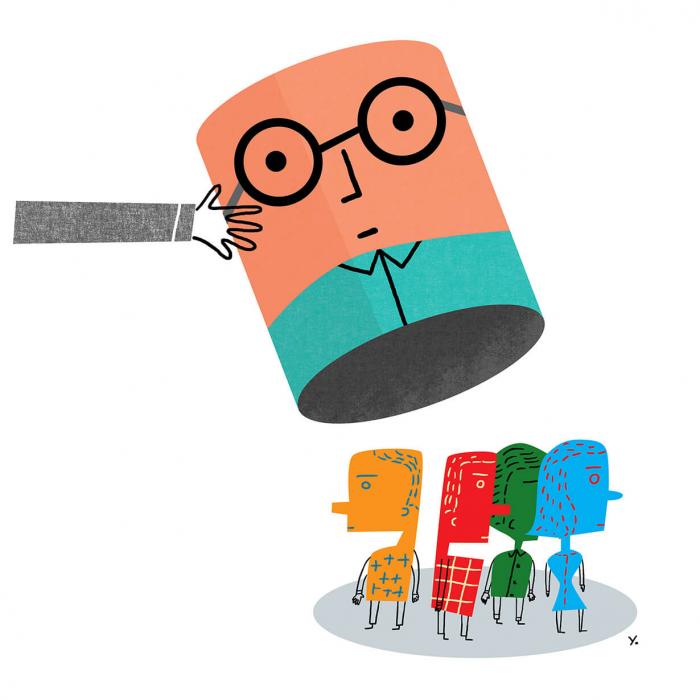 Books are a great way to encourage students to examine multiple perspectives.

My Name is Yoon by Helen Recorvits and illustrated by Gabi Swiatkowska
A young Korean girl moves to the United States and struggles with
language and school experiences.

Grandfather’s Journey by Allen Say
This award-winning picture book describes the experiences of living in two countries: the United States and Japan.

Inside Out and Back Again by Thanhha Lai
A Vietnamese girl describes her life at the end of the Vietnam war, her journey to the United States and the adjustment to her new life in Alabama—through a series of free-verse poems.

Mixed: An Anthology of Short Fiction on the Multiracial Experience edited by Chandra Prasad
This collection of essays explores the impact of living in the United States as a person of Asian heritage.

Sông I Sing by Bao Phi
A National Poetry Slam finalist reflects on his experiences as an Asian American with intensity and vibrancy that will appeal to high school students.

Responding to these stereotypes in the classroom brings its own set of challenges, but the work is necessary. “We need to recognize that race does impact students’ lives,” says Tran.

Azzu, the ESL teacher from Chapel Hill, agrees. “We have to teach both the teachers and the students,” she says. Many teachers have not explored their own feelings about race, white privilege and hidden bias, which is why Azzu created staff-development opportunities for teachers at her school to help build awareness of racial stereotypes.

“It’s a learning curve for the faculty, staff and students,” she says. Giving teachers the language and confidence to confront bias is the first step toward creating a more inclusive climate in classrooms and schools.

Judy Ouyang, a former fifth-grade teacher in a Mandarin and English dual-language program in Chapel Hill, had the confidence to speak up when she noticed her students were surreptitiously passing around a dog-eared copy of Gene Luen Yang’s American Born Chinese, a colorfully illustrated graphic novel exploring identity and self-acceptance.

Seizing a teachable moment, Ouyang used the book to drive discussions about stereotypes, bias and bullying. As her students analyzed the book and explored the history of Chinese immigrants in the United States, they became more comfortable talking about racial stereotypes and their effects on the school.

Gathering the most detailed and accurate data possible can also help dismantle stereotypes. Any evaluation that lumps together the student achievement of the 48 ethnic groups labeled Asian American will not give a true picture of students’ needs. High achievement scores in a large group can mask the issues of individual students within the group who are struggling.

The St. Paul, Minn., school district uses data analysis to drive programming in support of its students. Asian American students’ scores are disaggregated by ethnicity. Even more impressive are the district’s “apples to apples” statistics, in which results for ethnic groups are cross-referenced with income, ELL status and special-education information. After instituting these practices, the district saw a 10-percent rise in reading test scores at the Hmong Magnet School.In order to thrive, Asian American students must be recognized and supported as individuals with unique needs—they must be made visible. That can happen only in a safe, inclusive environment. “It’s a large mission we have,” says Tran. “But we all have to play our part in it: teachers, students, parents, school administrators, media and curriculum are all pieces to the puzzle.”

Login to join the conversation
I wonder if perhaps 'The Name Jar' by Yangsook Choi, or 'A Piece of Home' by Watts & Yum might be more appropriate choices for the picture book category over 'My Name is Yoon.'

Both of these books contain the same themes, for the same age range - except these books are written by Asian makers, whereas 'My Name is Yoon' is not.

I also have reservations on Swiatkowska's choice to depict Asian characters with stereotypical Jerry-Lewis-style bowl haircuts and a rather disfiguring and grotesque approach at broader cheekbones and epicanthic eye folds. Unlike her depictions of white characters, this family looks grotesque, with disproportionate heads.

In addition to this - I'd love to add that while books about Asian immigrants are popular in picture-book libraries, there are few that normalize us or allow us to be American-born without challenging us and depicting us as foreign - something this very article points out as an issue.

Illustrations such as Hyewon Jum, Qin Leng, and Kyo Maclear are all Asian illustrators who depict us as more complex, fully-formed humans without resorting to stereotypes and disfigurement.

Culture in the Classroom