Meet the Mix It Up at Lunch Day Model Schools

Get great ideas for your school's Mix event!
Issue 47, Summer 2014
Bookmarked 4 times
Add to a Learning Plan
X
Add to an Existing Learning Plan
START A NEW LEARNING PLAN
All articles from this issue
Print

Pulling off a successful Mix It Up event takes a good deal of coordination, but you don’t have to reinvent the wheel! We’ve pulled together everything you need in our free 2021 Mix It Up Starter Guide. Download it here!

Launched by Teaching Tolerance in 2002, Mix It Up at Lunch Day is a national campaign that encourages students to cross social boundaries, disregard stereotypes and shut down cliques by sitting with someone new at lunch. Cafeterias are prone to self-segregation among students, which makes them a prime location for promoting inclusion and appreciation for differences—and Mix It Up has a 12-year track record of doing just that.

Behavioral and social science research indicate that positive interactions across racial and ethnic lines improve intergroup relations, and the 6,000-plus schools that participated in last year’s Mix It Up at Lunch Day have seen that theory in action.

Over the past 12 years, thousands of schools have hosted successful Mix It Up lunches, recesses, dinners and snacks, with a wide range of themes and activities. But these outstanding events don’t happen overnight. They take careful collaboration among students, faculty, other staff members and administrators.

Above all, schools that do a great job of mixing it up pool their resources—creative, physical, financial and otherwise—to host events their students will remember throughout the year and carry with them in the form of increased empathy and respect for others and the willingness to make new friends.

Each year, Teaching Tolerance names Mix It Up Model Schools—schools that are the absolute best at utilizing their resources to create outstanding Mix It Up events. These schools exemplify the Mix It Up spirit, and they’re a great resource for schools that are just starting to mix it up!

This year’s Mix It Up at Lunch Day is October 28!

Your school can join in the fun! The first step is easy: Register for this year’s national Mix It Up at Lunch Day. The next step is to round up your team and resources to begin organizing a day—and a school culture—dedicated to warmly including and welcoming each member of your school’s community.

You don’t have to go it alone, though. In addition to the inspiring examples provided by our Model Schools, Teaching Tolerance offers a host of tips and resources online. And once you register, you’ll receive weekly emails to help you plan a Mix It Up at Lunch Day for the ages. 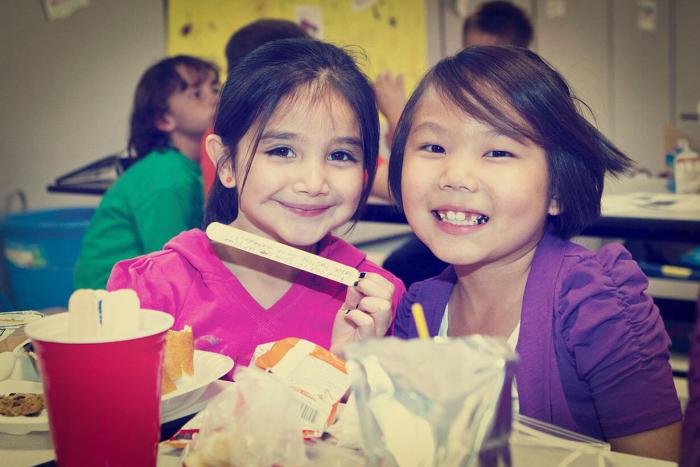 Read about all the Model Schools

Check out six Model Schools’ Mix It Up ideas!

Scholars at Balmoral Elementary devoted an entire day to mixing it up. A pep rally kicked off the day, then students in the younger grades engaged in activities with older students. The event ended with a school-wide flash mob dancing to “We Are Family” and forming a peace sign.

Eastwood Knolls students received strips of colored paper to determine where they would sit for lunch. Later, they each wrote one new thing they learned about a table mate on their strips. All the pieces were linked together as a chain and displayed in the cafeteria by a poster that stated, “We ALL have a common link!” 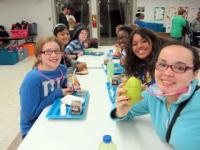 Iles Middle School and Washington Middle School mixed it up together this year! Glow-in-the-dark necklaces were used to group students. The two schools already co-op music and sports programs, but this joint lunch allowed the students to get to know each other even better. 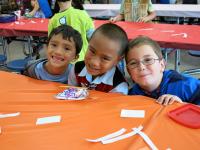 Two third-graders created the theme of loyal friendship for Quinn Elementary’s Mix It Up activities. Students (kindergarten through fifth grade) wore mismatched clothes and signed a Mix It Up mural, pledging to accept others’ differences and to be kind, caring friends.

Instead of mixing it up at lunch, Lynn English students mix it up at two dinners every year. Their October dinner had an “under the sea” theme. Participants enjoyed pasta and student-created art and decorations and then competed in a trivia game with their new friends as teammates.

Build collaboration and teach goal-setting with these Mix planning tools.