The fatal attack on Deah Shaddy Barakat, Yusor Mohammad Abu-Salha and Razan Mohammad Abu-Salha in North Carolina in February is widely viewed as a hate crime against Muslims. For Katebah Al-Olefi, a high school senior at Life Academy of Health and Bioscience in Oakland, California, the tragedy hit a deep nerve. “Katebah was not okay,” recalls Amanda Issa, the teacher-advisor for the Muslim Student Association (MSA) at the school. “I’ve never seen her cry so much.” Al-Olefi told Issa, “I’m afraid to be Muslim. I can’t hide it. It’s all over me.”

Hiding is not something Al-Olefi does well. She is ambitious, outspoken and a performer. She emcees school assemblies, speaks out as the student director of the All City Council Student Union School Board and is the youth coach for the Civic Engagement Club. You might even see her skateboarding across campus. She fits none of the stereotypes of a demure Muslim woman. She is a go-getter, like the late Barakat, already campaigning for the greater good. While Barakat was actively raising money to bring dental aid to war-torn Syria, Al-Olefi has plans to study public health with an international focus. Her ultimate goal is to open a community hospital back home in Yemen. She has already drawn up the designs and plans for operations. “Paul Farmer is my ultimate hero,” Al-Olefi says of the anthropologist and physician known for his humanitarian work.

So when Issa, who is the only Muslim teacher on campus, was confronted not only with her own grief over the slayings in North Carolina, but also the grief of Al-Olefi and the small group of students who meet weekly as part of the MSA, she said, “Okay, let’s wear the hijab so that we can say we aren’t afraid to show our beliefs.” What resulted was a one-day action to show solidarity with the victims: “Hijab Solidarity Day.” Nineteen female students, two female staff members and one male teacher joined Al-Olefi and Issa in wearing hijabs for the day.

A few participants needed to do nothing but show up wearing a hijab as they always do. But for their friends and allies, wearing a hijab was a new experience. According to math teacher Rich Boettner, “Students obviously wondered why I was wearing a hijab, which encouraged them to ask questions, thus, promoting a discussion, one which would not normally have occurred.”

While 19 students is a small percentage of the student body, on this day students like Shaima Omar said she saw more people “who looked like her” than she’s ever seen. There are fewer than 10 female Muslim students at the entire school of about 450 students. She reflected, “After seeing all my classmates wearing the scarf (hijab) … I felt like there are people who care and that support Muslims. I really appreciate what they did. I actually felt more comfortable … and more connected to them. I also felt more powerful.” Similarly, before the event, Marwat Al-Olefi, the younger sister of Katebah Al-Olefi, often felt misunderstood. “Sadly whenever I talk, the first thing that comes in my mind is, ‘Will they judge me because of my hijab? Should I even be here?’” Marwat says.

Al-Olefi has never let her hijab keep her from speaking up, and yet Hijab Solidarity Day empowered her further. In reflecting on the experience, she wrote, “As a hijabi … I felt so happy to see my classmates so excited to join us. It reminded me that there are people in the world who are not hateful and who don’t want to attack Muslims for wearing the hijab or practicing the Islamic faith. … I feel truly inspired by my classmates and I know that—as long as there are people like them—the world is a better place, not only for Muslims but for everyone.”

This sentiment was shared by non-Muslim students, too. Jamie Ortega said, “With the hijab I felt like I was standing up to the ignorance in our society.” Another non-Muslim student wrote, “Wearing the hijab made me feel really good because I was able to show that, even though I am not Muslim, I still support Muslim people.”

The deaths of “Our Three Winners,” as they’ve become known, are tragic, not only because of the hatred underlying the crime but also because Deah Shaddy Barakat, Yusor Mohammad Abu-Salha and Razan Mohammad Abu-Salha were clearly making the world a better place. May their memory be lifted up in the knowledge that young people like Al-Olefi meet to talk about issues facing American Muslims today—young people who will not be stopped by grief but are buoyed in their ambition to change the post-9/11 perceptions of Muslims in the United States and around the world. 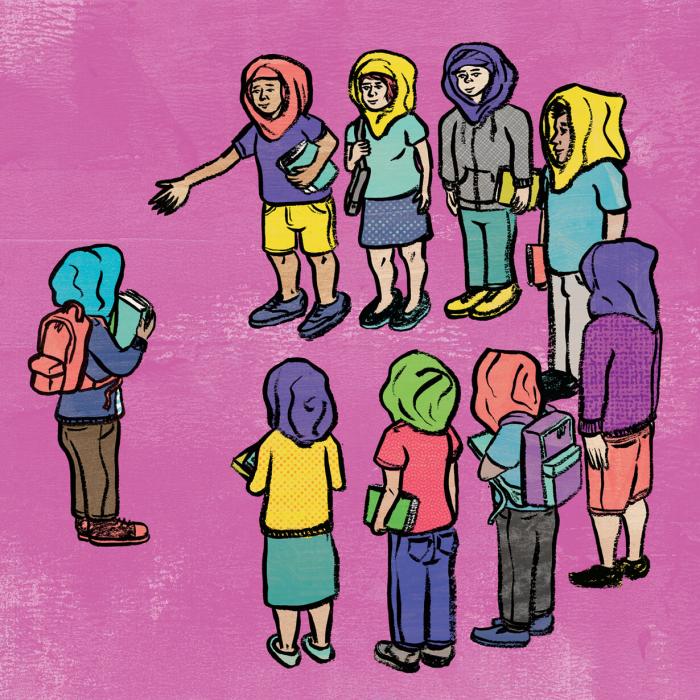 Appropriation or Appreciation? How to know where the line is

In this story, only four of the participants were Muslim and only three wore the hijab on a regular basis. At first glance, it could seem that Hijab Solidarity Day was yet another example of young people appropriating someone else’s culture. Over the last year, many social-media news feeds have been saturated with offensive photographs taken at African- and Mexican-themed costume parties (among others), featuring students in blackface and brownface wearing ponchos or holding spears. But there are key differences between appropriating a culture and appreciating a culture or acting in solidarity with an identity group. It is worth spending some time on the differences.

First, solidarity. Hijab Solidarity Day was initiated by a student from within the Muslim culture. It was done in reaction to an act of prejudice to raise awareness of discrimination against people of the Muslim faith, including those who wear hijabs.

But is it OK to wear the clothing of a culture not your own when you’re not deliberately expressing solidarity? There is a thin line between celebrating and exploiting another culture. The media consulting group Browntourage offers some guidelines in the form of questions to ask yourself to recognize if you’ve crossed the line:

If the answer to any of these questions does not honor or give back to the culture in an authentic way, has the label of a mass manufacturer sewn on it or gives you pause, then you have crossed the line into appropriation. Examples of cultural appropriation currently stocked at many stores near you include American Indian headdresses, “Navajo hipster” underwear, keffiyeh scarves, bindis and henna tattoos.

Cultural appropriation is the same thing as treating someone else’s culture as a fashion statement or a game, and it’s no coincidence that the culture being stolen is one that has already been exploited and marginalized in U.S. society. To be on the safe side of celebrating a culture that is not your own versus appropriating it, educate yourself but do not play “dress up.”

Toolkit for 'Dressing in Solidarity'