The bullying of teachers is slowly entering the national spotlight. How will your school respond?
Adrienne van der Valk
Issue 50, Summer 2015
Illustration by Byron Eggenschwiler
Add to a Learning Plan
X
Add to an Existing Learning Plan
START A NEW LEARNING PLAN
All articles from this issue
Print

On November 1, 2013, Teaching Tolerance (TT) posted a blog by an anonymous contributor titled “Teachers Can Be Bullied Too.” The author describes being screamed at by her department head in front of colleagues and kids and having her employment repeatedly threatened. She also tells of the depression and anxiety that plagued her following each incident.

To be honest, we debated posting it. “Was this really a TT issue?” we asked ourselves. Would our readers care about the misfortune of one teacher? How common was this experience anyway?

This outpouring was a surprise, but it shouldn’t have been. A quick Web search revealed that educators report being bullied at higher rates than professionals in almost any other field. (Nursing is also at the top.) A second search put us in touch with the Workplace Bullying  Institute (WBI) and its cofounder, Gary Namie, who for years has worked with teachers seeking support and relief from bullying. Namie and WBI offer a theory for the high concentration of bullying in education and nursing.

“The professionals who get into these fields [have] a pro-social orientation,” he says. “They’re helpers, right? For teachers, they’re really development specialists. … They’re not political animals. They have their back turned to the politics, which of course, then opens them up to this attack. Because of their goodness in a way, because of their motivation. This is why they get targeted.”

Namie’s description of who gets targeted matches up with the identity of our anonymous blogger and with many of the commenters: veteran or high-achieving teachers who cultivate strong relationships with students and families. So why these teachers, we asked? Wouldn’t they be the ones colleagues and administrators would want to keep around?

“Bully targets are threatening to a perpetrator. They pose a threat in some way, usually because of teaching excellence or focus on children, or adherence to the mission or their principles,” Namie explains. “This just agitates the crap out of somebody who is unscrupulous and sadistic. They can’t stand it.”

Karen Horwitz was an award-winning English teacher who experienced a stress-related health crisis and left education after suffering alleged bullying by her principal. After fighting an extended court battle (her case went all the way to the U.S. Supreme Court, where it was dismissed), Horwitz founded an organization called the National Association for the Prevention of Teacher Abuse (NAPTA). Based on over a decade of work supporting bullied teachers, she asserts that the motives behind teacher abuse fall into two camps.

Horwitz believes that a significant percentage of teacher bullying is related to school reform or privatization agendas (forcing out teachers who “won’t play ball”) and to attempts to cover up financial impropriety, a phenomenon she calls “white chalk crime” (also the title of her book). Low-income communities and communities of color, she says, are particularly vulnerable.

While experts may debate the motives, one thing is clear: The hierarchical structure of many schools and districts combined with the isolation many teachers experience due to the nature of the job can create an environment where bullying behavior can easily go unchecked—with devastating consequences for the target of the behavior and for the kids they teach. 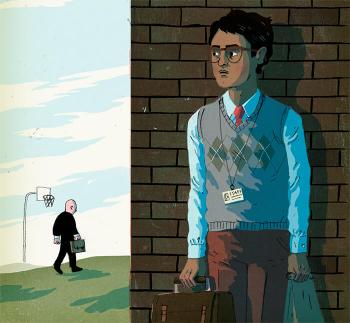 According to the numerous experts we spoke with and many of the commenters on our blog, the experiences of targeted teachers are, to use Namie’s words, “almost prototypical.” The teacher-bully relationship is often a new relationship or one that experienced a recent shift in power dynamics. The more powerful individual may single out the targeted teacher for ridicule in meetings or belittle her in front of students or parents. Other tactics include sending confrontational or accusatory emails, writing up the target for violating vague or undocumented rules, “icing out” the target, repeatedly videotaping the target’s class without explanation and suspending the target for insubordination if she attempts to report the situation.

Another strong theme among workplace bullying experts is the acute need to reduce the amount of harm and collateral damage to the target that’s inherent in any bullying situation.

First, there is the professional harm. Workplace bullying is among the top reasons trained professionals leave education. Walking away from any job is not a decision most people can make without emotional or financial consequences and, in many communities, finding another teaching position may be prohibitively difficult. On top of that, education degrees aren’t particularly flexible, making career changes harder to pursue.

Then, there are the physical symptoms. According to Matt Spencer, a former superintendent and author of the book Exploiting Children: School Board Members Who Cross the Line, victims of bullying might experience anxiety attacks, loss of sleep, loss of appetite, throwing up before work, inability to focus, depression and post-traumatic stress disorder. “[The symptoms] are very, very real,” Spencer says.

And, sadly, teachers are not the only ones who suffer when bullying behavior happens between adults.

“[Adults who bully] are modeling the behavior for [student] bullies,” says Namie. “They are actually undermining any moral authority to stop the child bully when the principal comes in and berates the teacher in front of the classroom. … That teacher now cannot tell a bully to knock it off, because the bully can say, ‘Yeah, well, you couldn’t stop Mr. Smith, why should I listen to you?’”

It was clear from the many personal accounts we researched that attempting to expose or stop a bullying co-worker was never easy and rarely effective. But it wasn’t entirely clear why—until we looked closely at the types of protections and policies most schools have in place. It is true that an increasing number of schools have anti-bullying policies, but they apply almost exclusively to students. Workplace harassment policies seem like they should protect targets, but most can only be enforced when the harassing behavior is linked to discrimination based on gender or race. If the target is not a member of a protected class or is unable to draw the line between discriminatory intent and behavior, “discrimination and harassment policies are just not the right mechanism to use with workplace bullying,” according to Spencer.

Bullying behavior can easily go unchecked—with devastating consequences for the target of the behavior and for the kids they teach.

As an educator who was targeted himself, Spencer is all too familiar with how limited protections for bullied teachers really are.

“When you look at an action as perpetrated by a workplace bully, you can see that it just doesn’t fit in the harassment law. The HR person who witnesses these kinds of behaviors … and is trying to use the lenses of harassments and discrimination [might say], ‘Yeah, they’re mean and rude and nasty and uncivil but they’re not … discriminating against you. So I’m just telling both of you to stop it and be nice and play nice in the same box.’ That’s what happens, because it’s such an ineffective tool.”

So what is an effective tool? Sociologist Alan McEvoy of Northern Michigan University studies workplace bullying and encourages  talking about the problem as a first step.

“Most academic departments in most schools do not devote any staff meeting time to discussing … bullying behavior among colleagues,” says McEvoy. “It is outside the comfort zone of many, and it’s difficult to change something unless you know how to name it. … As a consequence, the most common response is to do nothing, which is the worst response.”

McEvoy recommends that educators begin by assembling a task force or partnering with their local union. Preliminary discussions should focus on identifying a range of behaviors that are considered noncollegial—understanding that the list will include gray areas that require discussion. Through this discussion, McEvoy suggests capturing descriptions and statements that can become “a broad definition [including] not only what people do, but what they fail to do as part of noncollegial conduct.” This definition, he says, should ultimately inform a collegiality policy that ties to all faculty evaluations.

“What the evidence suggests is that noncollegial workplace conduct will persist in the absence of policies and in the absence of consequences,” McEvoy reports. “They have to deal with it. They don’t feel comfortable doing it.”

Namie agrees with the power of school-level policies, but would like them to carry more legal weight. He has been working for years to further a state-level bill called the Healthy Workplace Bill (HWB), legislation that defines workplace abuse and outlines the exact circumstances under which it can be pursued as a civil offense. In other words, to quote the WBI’s website, the HWB “plugs the gaps in current state and federal civil rights protections.”

“The bill is drafted in a way to incentivize employers to take voluntary action that they don’t do now,” Namie explains. “We’re saying, if [a school] want[s] to escape vicarious liability as an employer, what you need to do is you need to take reasonable steps. … Create a policy and procedures and enforce them. Make them available. If you’ve done all of that, then only the individual [who bullies] can be held liable.” To date, 29 states and two territories have introduced the HWB; 10 states introduced it in 2015 alone. Although it has yet to pass, encouraging developments in Utah (which now mandates abuse-prevention trainings for state workers) and Minnesota (which passed a statewide workplace bullying policy under pressure from the state employees’ union) are pushing the issue into the spotlight, paving the way, Namie hopes, for more states to take action.

Eighteen months after we published “Teachers Can Be Bullied Too,” the still-growing string of comments indicates that action is absolutely necessary. But while our research revealed a discouraging number of sad stories and statistics, it also revealed examples of people like Phyllis Runyon, a targeted teacher who worked first with the WBI and then with her local union to train members on the concept of workplace bullying. Just having more information and being a resource for others, she says, has helped her personally and made her teaching community more humane.

“[Adults who bully] really do have a certain profile,” Runyon points out. “I think once people recognize that the person who’s making their life miserable fits that profile, then that answers a lot of questions. It gives them more vocabulary to use in standing up for themselves. This is the definition. They’re not making it up.”