With and About: Inviting Contemporary American Indian Peoples Into the Classroom

There’s a long history of U.S. schools failing Indigenous peoples, cultures and histories. In this story, Native parents and educators share examples of how educators and schools still get it wrong—and the steps they can take to fix their mistakes.
Susan C. Faircloth
Issue 56, Summer 2017
Illustration by Paulo Campos
Teach This in a Learning Plan
X
Add to an Existing Learning Plan
START A NEW LEARNING PLAN
Bookmark With and About: Inviting Contemporary American Indian Peoples Into the Classroom
Print 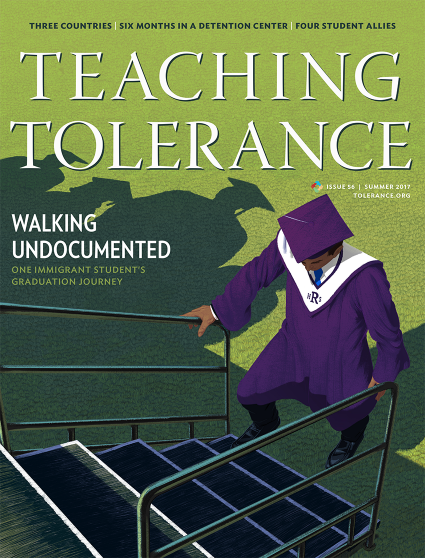 It’s no secret that American Indians have been subjected to educational policies and practices intended to assimilate us into the dominant culture. Over centuries, these practices have destroyed and eradicated many Indigenous languages and endangered the overall health and well-being of American Indian peoples and communities. In spite of these atrocities, we remain a strong and resilient people. We represent more than 600 state and federally recognized tribes, each with their own unique culture and many with their Indigenous languages still intact.

As an American Indian woman, an enrolled member of the Coharie Tribe, and a product of the public school system, I witnessed the ways in which this system promoted and sustained stereotypes and misconceptions about American Indians, our histories and our cultures. I endured countless history and social studies lessons in which Native peoples were left on the frontiers of the Wild West only to be remembered during the re-enactment of the first Thanksgiving. As a young child, I even won the contest for the best homemade pilgrim apron. I was so proud of my award until I realized how this activity served to privilege the White colonists over American Indians.

Now, I am the mother of a young child, and I wonder when—not if—her school will introduce her to this same false narrative. How will I react? Will I say too much or too little? Will the school be responsive? Will my child suffer the consequences of my action or inaction? I am heartsick at the thought of her wearing paper feathers and headbands or dressing in costumes made of shopping bags.

Unfortunately, my experience is not unique. I have had the honor of hearing from many Native families and educators about how they’ve navigated Native children’s educational experiences and, in doing so, helped their local schools or school systems become more informed and responsive. Here are some of their stories.

The first comes from the father of a middle school student from the Lumbee Tribe.

His daughter’s teacher asked him and the girl’s mother if it would be acceptable to cast the character Tiger Lily in a revised version of the play Peter Pan.

The student’s father responded with examples of ways in which Tiger Lily’s dialogue included inappropriate language (e.g., “Piccaninny Tribe” and stereotypical references to tomtoms). “It’s a hurtful reminder that this story was written in a time when people of color were not held in particularly high regard,” he explained. “I regret to say that everything about the ‘Indians’ in Peter Pan, even this version, reflects the worst kinds of stereotypes. It’s hurtful, personally, to see one’s own culture reduced to grunts, primitive talk and caricature. What’s worse is teaching non-Native kids, even inadvertently, that these stereotypes are OK by performing them on stage. As educators, I think we have an obligation to work against perpetuation of stereotypes. I know that [my daughter] is only one student of many that you teach, but please see this from her perspective, too, as a young Native woman who is still learning how to process and deal with stereotypes that she encounters in her own life. This is a formative time for her.” The teacher responded by thanking the father for his input and selecting a different play.

Mr. Wheeler worked with students to petition the school board for the celebration of Indigenous People's Day in place of Columbus Day. During a presentation to the board, the president of NAYO, a 17-year old high school student, explained that historical accounts are almost always told from the perspective of the dominant culture and omit American Indian voices. She pointed out that learning history from multiple perspectives enables us to view past events with a more critical eye. The NAYO Vice President, age 18, spoke specifically on the Taino point of view and the Taino peoples’ perspective on their encounter with Columbus. Rather than celebrating Columbus, she suggested a day that celebrates the accomplishments and contributions of American Indians to modern U.S. lifestyles and governance. Mr. Wheeler’s son, a 16-year old NAYO member, reminded the board that the American continents were "discovered" long before 1492. As a result of these students’ efforts, Indigenous People's Day was approved by the board of education in March of 2017.

Garcia and Shirley discussed two incidents involving their daughters, ages 4 and 18. As lifelong advocates of culturally relevant teaching practices, they attempted to work with educators in their 4-year old daughter’s early learning center to reinforce her identity as a Native person; however, their efforts were not successful and they eventually moved her to another classroom within the same center.

Fortunately, the educators in the new classroom created opportunities for their daughter to talk about her identity as both a Diné and Hopi person. The new teachers took an interest in the girl’s Native identity, which created the opportunity for her parents to work with the center. Garcia and Shirley recognized they could improve the center’s understanding and awareness of Native cultures and encourage their daughter to acknowledge and embrace her own cultural identity. They brought in books and other items about their culture to share with their daughter’s classmates. Her teachers now ask about her life outside of the classroom and encourage her to elaborate the experiences she describes. As a result, the child is more willing to openly share her culture with her classmates, as evidenced by bringing in Katsina dolls, rattles and books by and about the Hopi and Diné people. Recently, to her parents’ surprise, she facilitated an activity involving the drawing of Hopi clouds.

Shirley notes that her daughter, even at the young age of 4, is excited to talk about who she is and to explore the fact that she is both Diné and Hopi. While she and her husband described this experience as “a small pocket of success,” they also recognize the need to continue working to create an educational environment that honors and strengthens Native children’s identities. For Shirley, it was important to engage in “serious and honest conversations with [my daughter] about making her identity conscious.” Garcia emphasized that young children are cognizant of what is going on around them and can begin to share their experiences—if they have the necessary support.

Garcia’s older daughter, Mikaela, has developed a critical consciousness by sustaining connections to her Hopi culture and becoming informed about the many social and political issues Native people face. This consciousness enables her to push back against inappropriate or offensive practices at school.

The long history of U.S. schools marginalizing American Indians has led many families to feel unwelcome and detached from their children’s education.

Recently, a club at Mikaela’s high school campus elected to sell feathers during the homecoming game. Mikaela felt uncomfortable about this and decided to confront the issue. It was important to her that her classmates understood that, in her culture, feathers are sacred and spiritual, something to be prayed with, not sold or worn for fashion. However, the lead educator for the club, a non-Native student, did not understand the gravity of the situation; she viewed selling feathers simply as something the students could do to make money for the club. Mikaela continued to make her case. She felt strongly that it was important for her, not her parents, to address this issue. She met with the faculty advisor and the principal and asked them, “What if people were making cross necklaces just to make money? How would you feel?” She then explained that she viewed the selling of feathers as “selling off her culture.”

Although the incident was not resolved the way Mikaela had hoped, she took a stand and actively voiced her concerns. In reflecting on this experience, Garcia asked, “Can you imagine the pressure of being [the] youth at the table with [a group of] adult administrators?”

While each of these stories demonstrates how school-based biases place pressure on Native children, they also illustrate the pressures on parents and families to provide support and encouragement for their children. Although the families who shared their stories with me were equipped to meet these challenges, many parents and families are not. The long history of U.S. schools marginalizing American Indians has led many families to feel unwelcome and detached from their children’s education.

The successes reflected in these stories offer two important reminders.

The first reminder is that schools need to find ways to partner and collaborate with the families of Native students. To facilitate this process, schools must ask: How can we best support American Indian families in advocating for their children and in supporting their children in exercising their own voice? What can be done to create more welcoming and affirming schools for American Indian parents and families and their children?

When American Indian parents and families speak out against culturally inappropriate practices and educators are open to the possibility of new ways of teaching, it benefits not only American Indian students but their peers as well. Professional development and training can help educators adopt culturally relevant practices, but—beyond changing the way we teach—this process also requires attitudinal change. One of the easiest ways to change attitudes is to get to know the families we serve, particularly those whose culture(s) may be different than our own. When educators take the time to do this, they find that American Indian families want what all families want: for (in the words of Dr. Debbie Reese [Nambe Pueblo]) “the air [our children] breathe, and the books that [they] read to nurture [them], not hurt them.” We want the schools American Indian children attend and the lessons they learn to nurture and honor them.

Scholars Teresa L. McCarty and Tiffany S. Lee argue that “tribal sovereignty must include education sovereignty. Regardless of whether schools operate on or off tribal lands, in the same way that schools are accountable to state and federal governments, so too are they accountable to Native American nations whose children they serve.”

To learn more about culturally responsive approaches to teaching with and about American Indian peoples today, see this toolkit.

Login to join the conversation
I really appreciate the concrete examples given in this article. Abstractions and generalizations only get you so far--stories bring the ideas into real life. Thank you to the people who shared their stories, and to the author, of course.
x