Why the Texas Police-Stop Video Is a Problem

A new Texas law requires that students learn how to act appropriately when interacting with police officers before graduation, but it misses the mark by ignoring a history of policing that has not reserved the same respect for its citizens.
Coshandra Dillard
Photography by Alamy Stock Photo
Teach This in a Learning Plan
X
Add to an Existing Learning Plan
START A NEW LEARNING PLAN
Bookmark Why the Texas Police-Stop Video Is a Problem
Print

Signed into law in 2017, the Community Safety Education Act is the latest attempt by state lawmakers to reduce police shootings and instances of police brutality. Among the Texas law’s provisions? Before high school students can graduate in the state of Texas, they must first learn how to interact with police during a traffic stop.

The law requires students to watch a video titled “Flashing Lights,” which provides instruction on how they should behave if they’re pulled over by the police. When the video surfaced online this week, it was met with outrage, as well as questions about the messages we should be sending to students.

There is something obviously wrong with this approach. Despite cries for sweeping police reforms, despite the work of the #BlackLivesMatter movement, this video places the burden for ensuring safety—yet again—squarely on the shoulders of civilians.

The 16-minute video begins with a message from Texas State Senator Royce West, co-author of the bill, who says the goal of the new law is to repair trust between citizens and the police. West notes that the state is “addressing that issue through training in the academies, our law enforcement academies, our schools and driver’s education programs.”

Repairing trust between communities and the police that serve them is an admirable goal, but attempts like this one fall flat. Nothing in the video indicates that officials are doing anything to dive into the real issues that strain or break community trust: racial profiling, systemic racism, implicit bias, lack of cultural competency or lack of training to interact with our most vulnerable communities, such as people with mental illnesses, Deaf people or those who speak languages other than English.

Schools are also sites where community-police relationships may be strained. Across the United States, there are debates about the role of police in schools. We know some students are overpoliced—particularly students of color and students with disabilities—and at some schools, a minor infraction can escalate quickly, sending a child into the school-to-prison pipeline.

Given this history, it’s bizarre that a video designed to repair trust focuses on how civilians should interact with the police, instead of how police should respond to civilians—especially civilians of color.

It takes a lot of patience and compassion to encourage lawful and respectful behavior, while also helping students process the reality that those who are sworn to protect and serve them sometimes don’t follow the same rules as the rest of us.

While the teacher’s guide that accompanies the video attempts to explain what citizens’ constitutional rights are, it still suggests a need to show unwavering obedience to police. The guide explains that “an officer may conduct a nonconsensual search based on an officer’s observation that you have responded in a way to make the officer believe that you have engaged in a criminal act or are about to engage in a criminal act.” It also states that an officer can conduct a pat-down search if they suspect a person has a weapon.

Of course students need to understand that they should comply with instructions from police officers, but they also need to understand the nuances of these interactions. The guide never expands on the idea of “an officer’s observation” or why an officer might “believe that you have engaged in ... or are about to engage in a criminal act.” And it never hints at the possibility that an officer—whether black or white—might have implicit bias, that their observations and beliefs might be shaped by fear or by racial or cultural stereotypes. 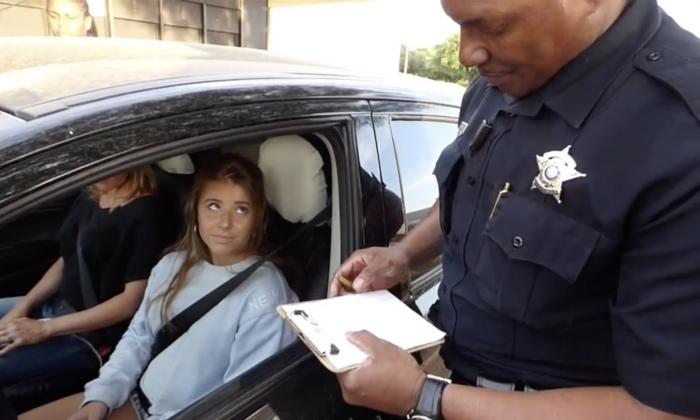 One thing the video does is illustrate the power dynamics in effect during traffic stops. We see this play out in the Texas video, where two nervous, fumbling teens are pulled over and approached by, not one, but two officers. There was no attempt to ease the fear of the occupants in the vehicle. Instead, the officers appear stoic and intimidating. Even so, the overall message is clear: Follow instructions, and everything will be just fine.

For years, social justice organizations have hosted “know your rights” workshops and provided tips for interacting with police. Parents of color have long had “the talk”—the one in which they explain to their children that they shouldn’t make sudden moves, that they should follow an officer’s instructions, that they should be painstakingly polite and save any possible argument for court. When an officer is threatening or abuses power, this call for calm and obedience is dehumanizing. But it’s necessary for survival. Parents want their children to make it home alive.

Students who have had this talk may struggle with the scenarios represented in the video as they compare them to what actually happens in real life—when citizens like Philando Castile, for example, who did follow procedures and broke no law, are still killed by police.

Although the video never addresses any of this, it’s clear that its creators knew their audience would have race in mind: By making sure nearly everyone in a position of power is a person of color, the creators carefully avoid any representations of white police exerting their power over people of color. This is, of course, an inaccurate representation of law enforcement, which—as a field—is disproportionately white. And even if that weren’t the case, officers of color are not exempt from problematic behavior, as they too are part of an institution that has always had a contentious relationship with marginalized communities.

It’s insulting to suggest that police and lawmakers don’t understand this. Police officers know that their very being, their authority and power, are threatening, particularly to young people of color who’ve experienced or witnessed police brutality or racial profiling. Like our students, they know that officers, who are rarely prosecuted or convicted for use of force, aren’t held accountable for loss of life.

Educators have a responsibility to draw a complete picture. It takes a lot of patience and compassion to encourage lawful and respectful behavior, while also helping students process the reality that those who are sworn to protect and serve them sometimes don’t follow the same rules as the rest of us.

When soliciting discussions after showing videos like the one in Texas, empower students to thoroughly examine this complex discourse. We can only hope that our elected officials will think more carefully the next time they create legislation that aims to foster reciprocal respect.

Dillard is a staff writer for Teaching Tolerance.