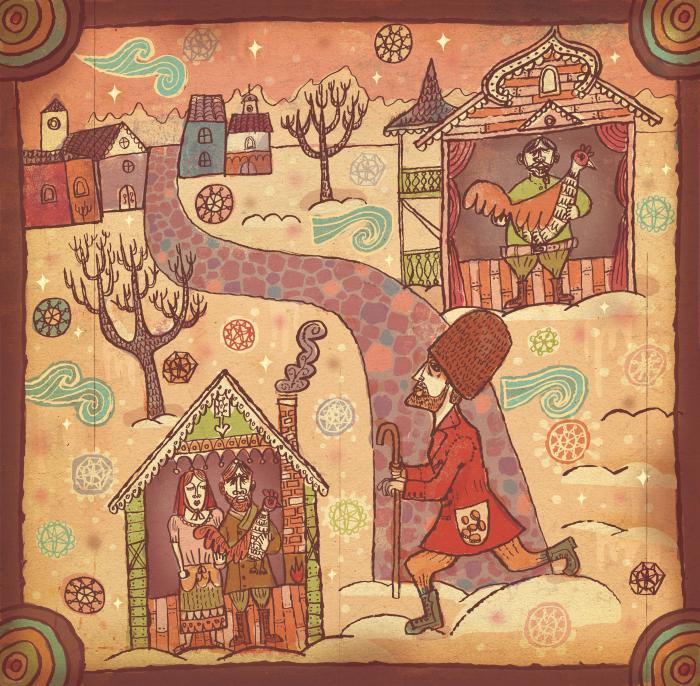 A Russian tsar wanted to learn what life was like for other people in his country. So nobody could guess who he was, he put on some shabby clothes and then set off on a walking tour around the country.

He was hungry and cold when he came to a small old hut in a small village at the bank of the river near the forest. There was so much snow that it took him a long time to find the hut’s door. He could hardly speak when he finally knocked. A peasant opened the door and saw a stranger who was cold and tired. So he invited the man into the house and sat him down in the warmest part of the only room, just near the stove. The peasant had many children and too little food. But when the family saw that their guest had a cough, they cooked soup from the only chicken they had.

It seemed to the tsar that he had never tasted such a delicious dish! He was impressed by their generosity.

“I want to do something equal for you, but I am afraid I can’t,” said the tsar. “You gave me the last chicken you had.”

“Oh, never mind! It’s too bad to catch a cold while traveling here in winter. And the hot chicken soup will help you to feel much better,” answered the peasant.

“Thank you, kind man,” said the tsar. He counted all the tiny drops of fat in his chicken soup and handed the peasant a gold coin for each one. The astonished family couldn’t believe that the guest in their home was the tsar!

The tsar continued his travel around the country.

A rich neighbor heard the story about the tsar’s visit and the money he gave the peasant’s family for a bowl of chicken soup. So he decided to get some money, too.

When he saw the tsar, he rushed into the street and invited the tsar into his nice big house. His housekeeper cooked a delicious chicken soup, and the man treated the tsar with it, pretending that he didn’t know who the guest was. “Try our simple dish, my dear friend! You are tired and hungry after a long travel,” said the rich man, smiling.

“Thank you, kind man,” answered the tsar. “You deserve something for your kindness and hospitality. I’ll pay you as many gold coins as there are fat drops in my chicken soup bowl.”

But the chicken soup had only one big, thick layer of fat, because it was cooked from the biggest and fattest chicken the rich man had.

So the tsar left the house, and a small gold coin was left on the table.