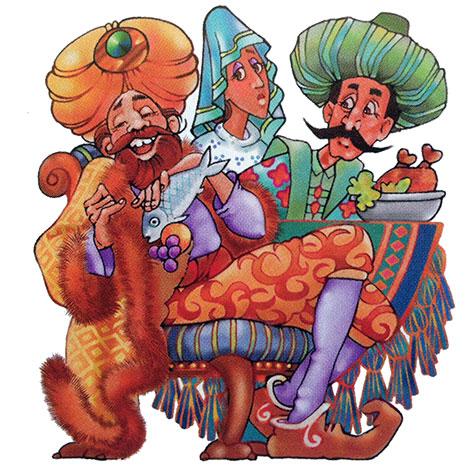 In the 13th century in south-central Turkey, there lived a certain Nasreddin Hoca (pronounced Hoe-djah). The Hoca was a religious leader and teacher and occasionally served as judge in local disputes. But he was also a kind of Everyman: foolish as well as wise, naïve as well as cunning, a trickster and the target of tricks. Through the centuries, the Hoca evolved into a Turkish folk hero, and tales about his escapades have been adapted into many cultures. His wit and wisdom continue to illuminate the problems and perplexities of everyday life.

One day the Hoca was invited to a banquet at the home of the mubtar, the most important man in the town of Akshehir. All day as he worked in his vineyard, the Hoca thought with relish of the fine food and the good conversation ahead of him.

But, alas, he had misjudged his day’s work, and he arrived home with too little time to dress with the particular care needed for such a grand occasion. It was either not wash and dress, or be late for dinner, and he must on no account be late for dinner, so off he went in his workaday dress and with the marks of his day’s toil upon his hands and face.

When he arrived at the mubtar’s door, the rest of the guests had already come, and conversations buzzed around the room. Curiously enough, no one asked the Hoca’s opinion on any matter, though at other banquets he had been the one most solicited for comment and advice. The mubtar himself scarcely noticed him. And when the time came for the guests to be seated for dinner, the Hoca was placed in the spot farthest removed from his host.

Quietly, the neglected guest excused himself from the group and hurried home. There he scrubbed himself from bald head to heels. Next, he attired himself handsomely in his new baggy trousers, an elegant shirt vest, and his largest turban. Then he slipped into his new fur coat, by far the most striking garment in all Akshehir. At last he was ready.

With his head held high, the Hoca presented himself again at the mubtar’s door. Every eye was upon him as the servants admitted him to the house. Rising immediately, the host came to greet him and led him straight to the place of honor at his own tray. As the dinner progressed, the mubtar addressed one question after another to his learned guest and served him the finest foods as soon as they were brought in by the servants. But to the mubtar’s astonishment, the Hoca began stuffing first one food and then another into the generous pockets of his new coat.

First the mubtar watched; then everyone watched, but no one could make any sense of the Hoca’s strange behavior. Finally the mubtar could remain silent no longer about the matter. “Hoca, effendi (sir),” said he, “what are you doing?”

“Ah, sire, I am but feeding the guest you invited to the banquet. When I came the first time this evening, you gave me no notice at all; when I came the second time, you treated me as the guest of honor. I have not changed; I am still Nasreddin Hoca. Therefore it must be my fur coat to which you are giving such honor. Since my coat is the guest of honor, it should have a fair share of this fine food!”