A Law for Regulating Negroes and Slaves in the Night Time

This is a law from 1731 describing the rules and punishments for slaves and black people out in the streets after dark in New York City.
Author
Will. Sharpas and Council
Grade Level
9-12
Teach This in a Learning Plan
X
Add to an Existing Learning Plan
START A NEW LEARNING PLAN
Bookmark A Law for Regulating Negroes and Slaves in the Night Time
Print

This text is part of the Teaching Hard History Text Library and aligns with Key Concepts 1, 2, 4, 7 and 8. 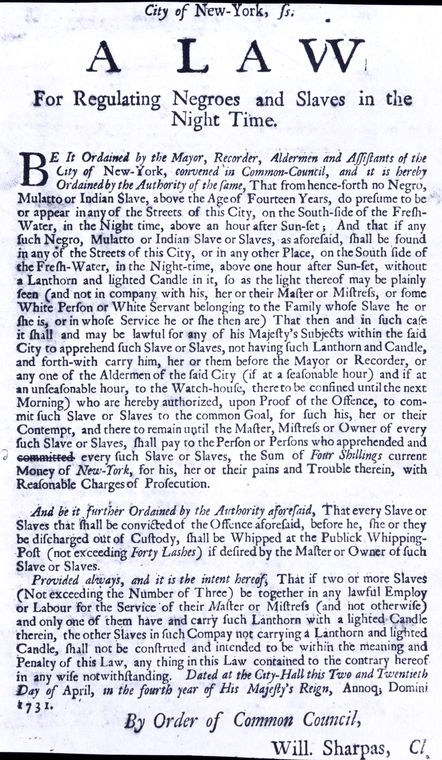 City of New-York,
A Law For Regulating Negroes and Slaves in the Night Time.

Be it Ordained by the Mayor, Recorder, Aldermen and Assistants of the City of New York, convened in Common–Council, and it is hereby Ordained by the Authority of the same, That from hence-forth no Negro, Mulatto or Indian Slave, above the Age of Fourteen Years, do presume to be or appear in any of the Streets of this City, on the South-side of the Fresh-Water, in the Night time, above an hour after Sun-set; And that if any such Negro, Mulatto or Indian Slave or Slaves, as aforesaid, shall be found in any of the Streets of this City, or in any other Place, on the South side of the Fresh-Water, in the Night-time, above one hour after Sun-set, without a Lanthorn and lighted Candle in it, so as the light thereof may be plainly seen (and not in company with his, her or their Master or Mistress, or some White Person or White Servant belonging to the Family whose Slave he or she is, or in whose Service he or she then are)That then and in such case it shall and may be lawful for any of his Majesty’s Subjects within the said City to apprehend such Slave or Slaves, not having such Lanthorn and Candle, and forth-with carry him, her or them before the Mayor or Recorder, or any one of the Aldermen of the said City (if at a reasonable hour) and if at an unreasonable hour, to the Watch-house, there to be confined until the next Morning) who are hereby authorized, upon Proof of the Offence, to commit such Slave or Slaves to the common Goal, for such his, her or their Contempt, and there to remain until the Master, Mistress or Owner of every such Slave or Slaves, shall pay to the Person or Persons who apprehended and committed every such Slave or Slaves, the Sum of Four Shillings current Money of New-York, for his, her or their pains and Trouble therein, with Reasonable Charges of Prosecution.

And be it further Ordained by the Authority aforesaid, That every Slave or Slaves that shall be convicted of the Offence aforesaid, before he, she or they be discharged out of Custody, shall be Whipped at the Publick Whipping-Post (not exceeding Forty Lashes) if desired by the Master or Owner of such Slave or Slaves.

Provided always, and it is the intent hereof, That if two or more Slaves (Not exceeding the Number of Three) be together in any lawful Employ or Labour for the Service of their Master or Mistress (and not otherwise) and only one of them have and carry such Lanthorn with a lighted Candle therein, the other Slaves in such Company not carrying a Lanthorn and lighted Candle, shall not be construed and intended to be within the meaning and Penalty of this Law, any thing in this Law contained to the contrary hereof in any wise notwithstanding. Dated at the City-Hall this Two and Twentieth Day of April, in the fourth year of His Majesty’s Reign, Annoq; Domini 1731.
By Order of Common Council,

Source
This text is in the public domain. Retrieved from http://digitalcollections.nypl.org/items/510d47db-bd0f-a3d9-e040-e00a18064a99.
Text Dependent Questions
Reveal Answers
Teach This in a Learning Plan
X
Add to an Existing Learning Plan
START A NEW LEARNING PLAN
Print