Raspberries! An American Tale of Cooperation 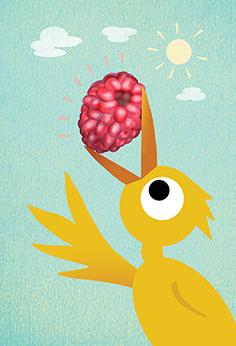 Pitter-pat! Pitter-pat!
A little dog trotted up to the hedge.

“Why the sad song?” he inquired.

“My brothers are flying
Loop-de-loop! Loop-de-loop!
to the raspberry bush across the street,” sighed the little bird,

“and they have left me here all alone.”

“We can get there on foot,” said the little dog.
So the bird and the dog hip-hop, trip-trotted along the sidewalk.
Pitter-pat! Pitter-pat!

At the corner, traffic zipped by.
Beep-beep!
Honk-honk!
Zoom-zoom!

“TWEET-TWEET!” cried the little bird, afraid for her life. 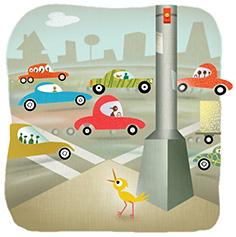 “We have to press the button,” said the little dog.

“Then the traffic light will turn red, the cars will stop,

and it will be safe to cross the street.”

The little bird jumped up and jumped up,
but she couldn’t reach the button.
The little dog reared up on his hind legs.
He poked with his paws,
nudged with his nose,
and even swatted with his tail, but he

couldn’t reach it, either.

“Chit-chatter! Chit-chatter!”
“What are you two up to?” asked a chatty chipmunk.
“We are trying to cross the street to get some
delicious raspberries,” said the bird, “but we can’t

“I’ll shimmy on up and press that button!”
the chipmunk said.
She shimmied, but the pole was too smooth, and she

slid and she slid back down.

Along came a frog,
flippity-flop, flippity-flop.
“Whatcha doin’?” asked the frog.
“We want to cross the street,
but we can’t reach the walk signal button,” explained the little bird.
“Lemme try!” said the frog.
He jumped and he jumped, flapping his floppy feet.
He even tried with his long, long tongue,

but he couldn’t reach it, either.

“I have an idea!” chirped the little bird, hip-hopping all around.
“Everyone lie down!”
“Lie down?!” said the dog, the chipmunk and the frog.
“Don’t we want to be taller?”

“Exactly!” said the bird.
She stepped onto the frog.
“Hee-hee! That tickles!” giggled the frog.
“Now hop onto the chipmunk,” instructed the little bird.

So the frog, with the bird on his back, hopped onto the chipmunk.
“Oooophf! You’re heavier than you look!” groaned the chipmunk.
“Now climb onto the dog,” said the little bird.

So the chipmunk, with the frog and the bird on her back, climbed onto the dog.
“Ouch!” yipped the dog. “Try not to pull my hair!”
But the chipmunk hung on to the dog’s fur for dear life.
“Now stand up!” said the little bird.

So the dog, with the chipmunk, the frog, and the bird on his back, slooowly stood up.
They balanced like acrobats in a circus. 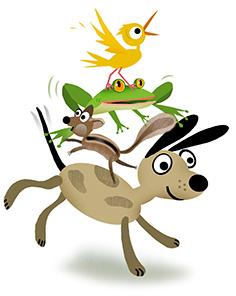 The little bird pecked
the button, and the light
turned red.
Traffic stopped. It was quiet.
The dog, the chipmunk,
the frog, and the bird
looked this way.
They looked that way.
The walk signal said,

That was quite a sight! But nobody saw them do it. Just at that
moment, the driver coming this way looked down to change
the radio station in his car. The driver going that way consulted
her map. When they reached the other side, the dog slooowly
kneeled down and the bird, the frog, and the chipmunk hopped

off and raced to the raspberry bush:

where they ate delicious raspberries all day long. 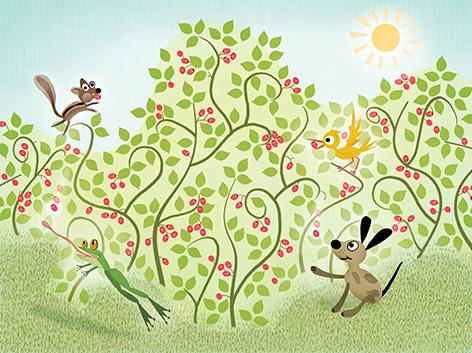