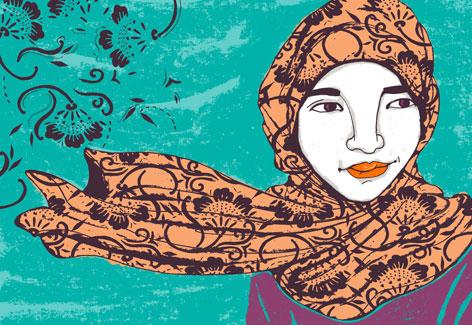 I have a story to tell you. It is about a girl named Zahrah and about her family’s religion, a religion called Islam. It is about how ideas about religion can make us act in mean ways toward each other, but it is also about things we can do to understand each other better.

Different religions have different beliefs, practices and symbols. Many Christians go to church on Sundays, for example, and some wear crosses to show their beliefs. Many Jews go to synagogue on Saturday, and Jewish men may wear a small cap called a yarmulke. For Muslims, the followers of Islam, Friday is a special day when many go to the mosque to pray. Many Muslim women cover their heads with a special head scarf. This scarf is called a hijab. Other religions have their own traditions and ways of doing things. And some people do not practice any religion at all.

Back to Zahrah’s story. When she was in third grade, Zahrah started wearing a hijab. Her favorite colors were purple and blue. Older Muslim girls and women, like Zahrah’s sister and mom, wear the hijab whenever they go to school, to work or out in public. Because she was young, Zahrah only wore her hijab on Fridays.

Not many people in Zahrah’s school knew much about Islam. Some friends asked her about wearing the hijab. She was happy to explain that her religion teaches that the hijab is a way of being humble and modest. “We wear it because we love God,” Zahrah told them. But one classmate still didn’t understand. He made fun of Zahrah’s hijab and asked her over and over why she wore it.

Zahrah answered, “Why do you wear pants?” The boy did not have an answer. What Zahrah was saying was that the hijab made her feel like she was dressed properly, according to the teachings of Islam.

One time, though, Zahrah forgot her hijab at school overnight. Some classmates found it. They threw it on the floor, dragged it around and got it dirty. “They ruined it!” Zahrah cried when she saw it.

Has anyone ever ruined something special to you? It makes you feel bad and sad, doesn’t it? It hurts a lot when someone does something on purpose to hurt our feelings.

Well, that’s how Zahrah felt. She told her teacher what had happened. The teacher talked with the kids who had ruined Zahrah’s hijab. “They told me they were sorry and that they wouldn’t do it again,” she said. Zarah felt a little better.

But her mom had a better idea. She shared it with Zahrah’s teacher, who liked the idea too.

One day, Zahrah’s mom came to class wearing her hijab. She explained why Muslim women wear the head scarf and why it is a special piece of clothing in their religion. Then she asked Zahrah to come to the front of the room. Her mother showed the class how to put on the head scarf by putting it on Zahrah. Zahrah smiled shyly while her mom pinned it under her chin and wrapped it up and around her head until just her face, with her honey-colored eyes, showed. Then her mom answered questions about the hijab and being Muslim: Do you wear it in the shower? No, that’s not necessary. Do you have to wear it forever? Muslim women usually don’t wear the hijab at home with their families.

Her mom’s visit made Zahrah feel more confident, and her classmates got the message. There was less teasing after her mom’s talk. The other students understood why the hijab was important to Zahrah and her family. They realized it wasn’t kind or fair to make fun of Zahrah or her beliefs.