“I See New York City as a Classroom”

At the United Nations International School (UNIS) in New York City, Abby MacPhail is leading her high school students in a first-hand investigation into housing injustice. Her idea for the project began five years ago. Attempting to fund a trip to Kenya for the students in her Global Politics class, she had an epiphany.

At the same time, she was digging into Matthew Desmond’s Pulitzer Prize-winning book Evicted: Poverty and Profit in the American City, which chronicles the cycle of poverty and economic exploitation that eight families in Milwaukee experienced while struggling to keep their homes. The book changed MacPhail’s life, she says, and she knew Evicted would draw students in immediately. She was right; soon her students were hooked.

MacPhail began her class’s project on housing injustice by briefing students on the topic of human rights. The class read the “Universal Declaration of Human Rights” and explored housing rights. They focused in particular on the right to safe and decent housing written into national and city laws.

MacPhail’s students chose to continue their studies through journalism or photography—or both. They trained with professional journalists and photographers on basics like choosing a research topic and crafting interview questions. In a workshop, the class learned technical skills like camera operation and introductory photo editing.

The students took their newfound knowledge and headed out into the field. They traveled to different parts of New York City to meet with housing injustice organizations and individuals working to solve New York’s housing crisis. They also spoke with residents directly affected by the housing crisis, and they filmed and photographed those willing to share their stories.

“It’s very powerful,” recalls MacPhail. “It’s life changing, actually, because students read about statistics, but when they meet people who’ve been displaced so many times, they see the personal effects of injustice. They start to locate those injustices in larger structural forces rather than personal deficits.”

It’s changed my vision of my future. And maybe I want to stay and work towards making things better.

Students presented their work at Photoville in Brooklyn Bridge Park. At the city-wide, Education Day event, they shared their photographs and spoke about housing injustice with other students from around the city. Finally, they passed their interview transcripts along to students in their school’s theater department, who will spend the next several months transforming the collected stories into a theatrical performance. 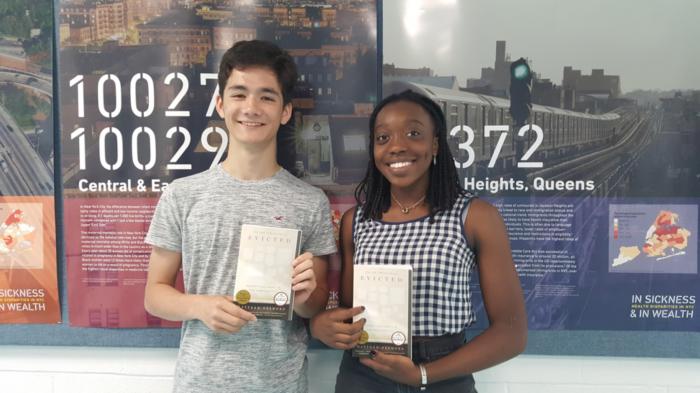 This spring, the class will host a public symposium to showcase their work. They will invite all of the activists and residents interviewed, as well as representatives from local housing injustice organizations. The students plan to present their work in a photo exhibit. “[The interview participants] will come in, they’ll see their photos, they’ll see their words,” MacPhail explains. After a series of public workshops, the symposium will conclude with the theater piece, sharing interviewees’ stories with all in attendance.

As a result of MacPhail’s project, one student has shifted her thoughts about leaving her community. “Growing up in the Bronx in public housing,” MacPhail relays, “the student thought her whole life, ‘I can’t wait until I get out of here because nobody cares about this community.’” But the project made her realize that people do care. MacPhail recalls the student saying, “‘It’s changed my vision of my future. And maybe I want to stay and work towards making things better.’”

MacPhail points to the hands-on, real-world focus of the project as critical to its success. “I see New York City as a classroom,” she says. And while in the past, many of her students have viewed charity as the solution to injustice, she says that standard has changed.

“When they tell me they’re working on policy changes, following politics, following their local city council members and looking at which ways they’re voting—that’s what I want. I’ve done something right when I hear that.”

Learn more about the Teaching Tolerance Educator Grants program and apply for your own grant here! Applications are accepted on a rolling basis.

Ehrenhalt is the school programs coordinator for Teaching Tolerance.

TT Educator Grants support social justice work in the classroom, as well as at the school and district levels. Latinx middle schoolers in California interviewed community leaders who reflected about the challenging and rewarding path to a thriving adulthood.
Jey Ehrenhalt
article
Bookmark This PageSave