Bully on the Bus

Does your school's anti-bullying policy end at the edge of the parking lot?
Mary Harrison
Issue 28, Fall 2005
Bookmarked 3 times
Illustration by Michael Witte
Add to a Learning Plan
X
Add to an Existing Learning Plan
START A NEW LEARNING PLAN
All articles from this issue
Print

When her Western Pennsylvania school district implemented an anti-bullying policy, 4th-grader Kelsey put that policy into action with the bully on her school bus.

She wrote down what she planned to say, told her mother about it and built up her courage by practicing out loud. Then, as usual, she got off at her stop with 10 other students, including the bully. With the other students watching, she told the boy, "We don't want to listen to you anymore. We think you're a bully."

Kelsey said the boy hadn't realized he was bullying. After she stood up to him, he stopped. He's happy now, she said, because he made "a bunch of friends."

Who are the friends?

"The kids who get off the bus with him," Kelsey replied, smiling. "He has 10 new friends." 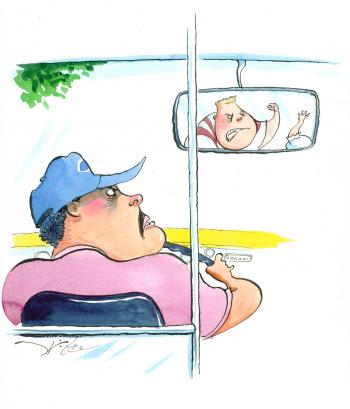 Across the country, more than 24 million students begin and end their school days on buses. In most cases, the driver is the only adult on board. To transport students safely, the driver must watch the road, not the riders, during most of the trip.

Bus drivers have mirrors, of course, and usually see fights. But they can easily miss pushing, shoving and grabbing of others' belongings. They also may miss or overlook verbal bullying — typically sexual, anti-gay or racial comments, as well as harassment about clothes, body size or family income — that can make the trip a nightmare for targeted students.

"When kids get on the bus early in the morning and are immediately humiliated and degraded, that has a particularly destructive resonance, especially if it's day in and day out," said Stephen Wessler, director of the Center for the Prevention of Hate Violence at the University of Southern Maine. "It's difficult to reset the climate at school to (be) welcoming for a student who has just spent 45 minutes being harassed."

Some districts hire adult monitors for buses, but most say they can't afford monitors for every bus. Some also have installed video cameras, often with sound, hoping to deter would-be bullies and help administrators determine, after the fact, who did what on the bus. A less common idea, proposed by parent groups and others, is to put parent volunteers aboard school buses; few districts, however, use this option.

While many school districts today do extend their student-conduct policies to include buses, Wessler said more needs to be done. Districts need to train bus drivers to intervene and stop harassment, he said; districts also need to give drivers appropriate procedures for reporting problems and let them know how complaints they have filed have been resolved.

"If you create a climate where the drivers feel not only that it's their responsibility, but also that they will be backed up for intervening and trying to stop harassment, and if you give students the leadership skills to do the same thing, you can reduce harassment," Wessler said. "You can make the bus safer."

'Stop the Sting of Bullying' 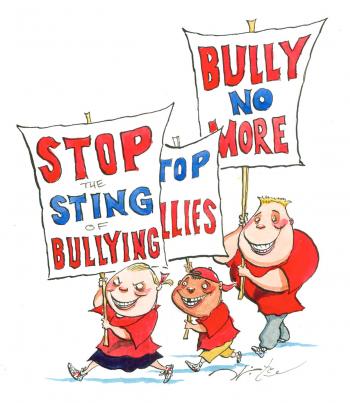 Hermitage School District, where Kelsey attends, launched its anti-bullying campaign with a huge splash. Some 1,400 elementary and middle school students, clad in red T-shirts with anti-bullying logos, marched to the high school stadium where they joined 800 students from that school. Younger classes paired up with older classes for an upbeat event that included games, lunch, bands, speeches and fireworks.

Kelsey listened closely that day as speakers defined bullying, described its painful effects and outlined strategies students can use to stop it. That afternoon, she signed a pledge to Stop the Sting of Bullying (PDF). Three weeks later, she put that pledge into action, on her own bus.

According to bus driver Jean Sinkus, now that bullying has been brought to everyone's attention, it's easier for her to stop it quickly by saying, "That's bullying" — just as Kelsey did.

Hermitage Superintendent Karen Ionta said she was moved to implement the districtwide policy after encountering a student who had been bullied at the prom. "You can't put a bag over your head and pretend these things don't happen," she said.

The whole concept is to activate and empower the bystanders. Then they become part of the solution.

Ionta also wanted everyone who had contact with students — teachers, administrators, counselors, nurses, cafeteria and maintenance workers and bus drivers — to have a hand in shaping the anti-bullying policy and program.

Before the kickoff, the district brought in Meredith Monteville, a trainer for the National Education Association's Bullying/Sexual Harassment Prevention/Intervention Program, to conduct a daylong training session for committee members.

The kickoff, designed to focus attention on bullying in a positive way, was successful beyond the committee's hopes. "It was almost a bonding of the district," Barnes said. "It was something we had never experienced."

During the kickoff week, when teachers hung posters and pledges on school walls and introduced bullying curricula, drivers hung anti-bullying posters in their buses. They also initiated "Act of Kindness" awards for students.

Monteville returned for a second training, this time for 54 students in grades 6 through 12 who were invited by their counselors and principals to form student leadership committees at their own buildings.

"The whole concept is to activate and empower the bystanders," Monteville said. "Then they become part of the solution."

Seventh-grader Elise, for example, found that stopping your own friends from making fun of others is easier than most students expect. She recalled a moment when a group of students was waiting to board the bus and a friend of hers mocked another student's speech.

The friend didn't react in anger or hold a grudge against Elise; instead, she simply stopped picking on the other student.

The high school committee was less optimistic than the middle school group about changing bullies, who they said are set in their ways by high school. But several students nodded when Josh, a 10th-grader, said he agreed to be on the committee because he wanted to work with the younger students on bullying problems. After seeing how much the little kids enjoyed being with the big kids at the kickoff, Josh said, "I want to steer them in the right direction."

Chris Gill, Hickory High co-principal in the Hermitage district, believes that in addition to making all students more aware of bullying, the kickoff and program have given hope to victims, whether at school or on buses.

"They may have thought, 'This is what I have to put up with; this is what high school is all about,'" he said. "Now they know there's a support system, that something's going to be done about it, and that they don't have to put up with it. ... They know now that bullying shouldn't be tolerated."

Lake Denoon Middle School in Wisconsin took a different approach to addressing behavior on school buses. After some students reported in an annual school survey that they didn't always feel safe on buses, the school focused new attention on bus safety.

A team including students, drivers, teachers, administrators and the manager of the bus company under contract worked together to develop the district's "R & R Onboard" action plan — for "respect and responsibility."

The action plan included one list of expectations for students and another for drivers. The lists are posted in buses. A 6th-grade class drafted a behavior report form (PDF) students can use to report bus problems. Students can pick up the form in every classroom.

One year into the program, drivers are filing significantly fewer bus conduct reports — and students aren't being branded as tattletales.

"Bringing something forward doesn't necessarily make you a complainer," Associate Principal Ron Rivard said. "It makes you someone that can change things for the better."