The Sikh and the Skinhead

An unusual duo fights hate in the classroom.
Don Terry
Issue 45, Fall 2013
Photography by Roark Johnson
Teach This in a Learning Plan
X
Add to an Existing Learning Plan
START A NEW LEARNING PLAN
Bookmark The Sikh and the Skinhead
Print

Pardeep Kaleka has been teaching social studies for seven years at the Northwest Opportunities Vocational Academy (NOVA), an alternative high school in a tough neighborhood on the north side of Milwaukee. Before that, he spent four years as a police officer patrolling the same neighborhood—a struggling stretch of the city his former colleagues in blue call “Little Beirut.”

“I’ve seen a lot of poverty and gunplay and the suffering it produces,” Kaleka says. “I have the utmost respect for police officers. But I didn’t think [by] being a police officer I was contributing enough to make the world better. I went into teaching because I wanted to help kids on the front end and was sick of handcuffing them on the back end.”

Between the badge and the chalkboard, Kaleka thought he knew all about hardship and heartbreak, tragedy and triumph, good and evil—until a neo-Nazi named Wade Michael Page strode into a Sikh temple in suburban Milwaukee on Sunday, August 5, 2012, and started shooting worshippers with a 9mm pistol. Page killed six people that morning, including Kaleka’s 65-year-old father, Satwant Singh Kaleka, an Indian immigrant who was president of the temple.

“I couldn’t understand how someone could do something like that, just walk into a place of worship and gun people down,” Kaleka says. “I wanted to know—I needed to know—why?”

It’s a question he can never ask Page. As police moved in to stop the rampage, Page killed himself. No note. No reason why.

So about eight weeks after the temple massacre, Kaleka went searching for understanding. He traveled to the east side of the city and sat down to dinner at a Thai restaurant with Arno Michaelis, a notorious white supremacist skinhead turned anti-racist activist, speaker and author of a memoir, My Life After Hate.

“I tried to get into Page’s head by getting into Arno’s,” Kaleka says. 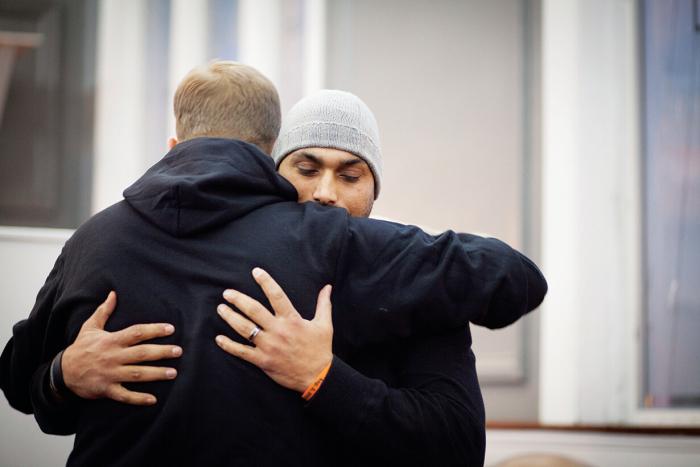 The dinner was scheduled to last about 90 minutes. It went on for hours. The men passed a pot of tea back and forth, taking turns pouring for each other. Michaelis told Kaleka that he could have been Page and—with a break or two—Page could have been Michaelis, an escapee from the madness and hate that killed Page and six others.

“When you practice hate and violence you crowd out any room for love and kindness,” Michaelis says. “It’s a really nightmarish way to live. I lived it for seven years. I tried to get Pardeep to understand that. As hard as it is for him to look upon the man who murdered his father with a perspective of compassion and kindness, you’re kind of behooved to once you understand the depths of his misery.”

As the men parted, Michaelis gave Kaleka a copy of My Life After Hate. The self-published book is about his seven years in hate and the acts of compassion, large and small, that chipped away at his racist resolve, like the words of a black woman who regularly served him at a McDonald’s restaurant. One day she noticed a swastika tattoo on his hand. She looked him in the eye and told him he was a better person than that.

Michaelis was the kind of guy on whom Officer Kaleka would have gladly slapped the cuffs. Yet, soon after their first supper, the Sikh and the skinhead formed an unlikely partnership, a tag team of tolerance, traveling to speak at schools and churches about the power of love and forgiveness. “We realized that we could honor and use the memories of everyone we lost as inspiration for change, as inspiration to make the world better,” Kaleka says.

They do some of their most intense work on the second floor of NOVA in Room 206. Once a week during the spring semester, the former white supremacist perches on the edge of a desk in Kaleka’s social studies class of mostly African-American and Latino students to discuss reading and writing assignments from Michaelis’s book.

Recruiters for racist skinhead groups target disenfranchised youth who desire structure, status and an outlet for their anger.

Kaleka uses a teacher’s edition of the book as his guide through the thick woods of violence and racist language that dominated so much of Michaelis’s life in hate. Michaelis calls this time—seven years in the 1980s and early 1990s—his “days of boots, beer and blood.”

The teacher’s edition of My Life After Hate was the brainchild of Julie Sanders, who teaches in an alternative high school in Beaverton, Ore. “I don’t have any neo-Nazi skinheads in my class,” Sanders says. “But I do have gang members and kids who have been exposed to violence on a daily basis in one form or another. The message I’m trying to show my students: It doesn’t matter what you’ve been through or what you’ve done. You can change.”

Sanders filled the teacher’s edition, also self-published, with class discussion topics and student writing prompts. In addition, she assigns her students memoirs by other men and women haunted and hurt by lives nearly wasted or lost to the streets, including Autobiography of a Recovering Skinhead: The Frank Meeink Story and A Piece of Cake by Cupcake Brown. “I think a lot of schools would look at the subject matter and say, ‘We can’t use this,’” she says. “‘Too much violence, too [many] drugs.’ I want teachers to understand there’s nothing to be afraid of using these books. They don’t glorify the violence the author has been through. It’s really about the process of change.”

Still, the material can be rough. In the teacher’s edition of My Life After Hate, Sanders warns that some students may not be prepared to hear the more graphic details of Michaelis’s long journey of discovery. That’s why it’s important to collaborate with school counselors, to inform parents and to assess your classroom climate.

“Some teachers should not use this material in the classroom,’’ Sanders says. “A teacher that teaches this type of material should have a well-established classroom environment of trust and safety before the book is introduced. Only a teacher who values his or her students’ individuality and has established strong relationships of mutual … respect can successfully teach this curriculum.”

Autobiography of a Recovering Skinhead: The Frank Meeink Story co-author Jody M. Roy is a professor of communication and assistant dean of faculty at Ripon College in Wisconsin. She agrees that it is “always advisable to be prepared to provide students with assistance in managing their reactions to new material—whether a life story like Arno’s or Frankie’s or simply an encounter with a new idea that challenges their way of thinking.”

“It’s important to remember,” Roy adds, “that for some students these sorts of narratives have a powerful and positive impact. Just two months ago I met a 15-year-old boy who told me he’d recently read Frankie’s story and, as a result, decided not to join a gang. That’s why these books were written. That’s the power they have when they reach the right audience.”

When Kaleka first told his students that a former white supremacist was coming to speak to the class, Raquel Anderson, a 17-year-old junior who wants to be a doctor, did not know what to expect. She was nervous. Maybe a little scared. She had never met a Nazi before. But she trusted Mr. K.

“I’ve learned a lot from Arno,” she says. “No matter what you’ve done, you can change. You can be better. I guess I knew that before, but I didn’t really believe it or witness it until I met Arno and read his book.”

One morning, Michaelis showed Room 206 a video of his younger, racist self as the lead singer—screamer—for a white-power band.

“Are you fixing to be a little embarrassed by this video?” a student asked before Michaelis turned it on.

“I’m humiliated by this video,” he replied.

“Were you drunk in that video?”

“Yeah. I was always drunk.”

“Were your parents into that racist stuff?” the student asked.

“Your mama should have whipped you good.”

Another student raised her hand.

“Do you feel you’re going to be racist again?”

“Hell no,” Michaelis said. “Being a racist sucks.”

Then Kaleka asked the class a question.

“The best way to combat hate is what?”

“There you go,” the former police officer said, beaming.

Meet others who have unlearned hate.