When Dr. Rajiv Bhatia walked into the lunchroom at Mission High School in San Francisco in 2007, he couldn’t believe what he saw. Bhatia, then director of environmental health at the San Francisco Department of Public Health, was there to study food systems and look for ways to increase nutritional quality. What he found would ultimately lead him to an entirely different investigation: a system of blatant segregation that seemed straight out of the 1950s. In one line cash-paying students waited to enjoy a wide selection of à la carte, or “competitive,” foods. In another, low-income, mostly minority students stood single file to receive prepackaged free-or-reduced meals supplied by the National School Lunch Program (NSLP).

“It’s like wearing a sign that says, ‘Hey, I’m poor,’” says Jeff Kapka, who grew up in a low-income family in the predominantly wealthy suburb of North Kingston, Rhode Island. At his school the kids stood in the same line but held different colored tickets advertising their lunch-purchasing status. Now a junior at the University of Rhode Island, Kapka can reflect objectively on growing up in relative poverty. “But back then,” he says, “I would have told you it was embarrassing.”

Kapka and other recipients of government-assistance programs are no strangers to stigma. The term “food stamps” has become so politically loaded that, in 2008, Congress changed the official name of the Food Stamp Program, the largest of the federal nutrition assistance programs, to the Supplemental Nutrition Assistance Program (SNAP). But the stigma remained, as it did for the NSLP—the second largest of these programs—which serves free-and-reduced lunches to more than 31 million students annually. With anti-welfare sentiment politically de rigueur, the perception that those receiving government assistance are “moochers” is arguably worse than ever—and even extends to children.

“There’s this pervasive attitude across the country that if people get help, they’re lazy, they’re scamming the system,” says Kathleen Gorman, who has managed the state of Rhode Island’s SNAP Outreach Project since 2001. “People have really gotten this idea that just because people don’t have money they’re morally inferior. It’s getting a lot more attention.”

When this kind of stigma enters schools, it catalyzes in the high-peer-pressure environment and combusts in ways that harm low-income youth. In many cases, the stigma is so bad it becomes a barrier to proper nutrition. Although U.S. Department of Agriculture (USDA) figures for NSLP participation optimistically indicate majority participation rates, surveys of individual districts show rates below 14 percent in some places. Many students would rather forgo their midday meals than take the walk of shame in the NSLP line. And while legislators, interest groups and administrators know hunger affects classroom performance and continue to focus efforts on improving lunchroom nutrition, the issue of stigma as an underlying cause of hunger remains on the back burner.

That lack of awareness is what Bhatia set out to change when he saw what was happening in San Francisco schools. He was joined by Colleen Kavanagh, founder and executive director of Campaign for Better Nutrition, and Tara Kini, an attorney at Public Advocates.

“When Rajiv told me what he saw, I immediately knew we had to do something because it was illegal,” says Kavanagh. “But when we brought it up with USDA, they said, ‘Well, that’s just San Francisco. No one else does that.’”

Kavanagh wasn’t convinced. She put together a study looking at high schools nationwide, and found fully one-third of school districts had separate lines or service areas for NSLP and competitive foods; one in 10 had what she calls “particularly egregious segregation.” California was among the worst.

According to Kavanagh, these schools were allowing two levels of food service, with low-income kids served meals of lower appeal and quality (if not nutritionally then at least in terms of appearance and presentation) while kids not receiving NSLP benefits enjoyed broad choices. “There isn’t any other place in our school system where we let that happen,” she says. “They don’t let kids pay for better teachers or better textbooks.”

The federal government maintains strict standards on the nutritional requirements of NSLP meals and doesn’t allow the program to offer noncompliant (i.e., many competitive) foods—thus, the separate tickets and lines. According to Kavanaugh, however, schools’ internal accounting is often not kept separate, exacerbating what she sees as a serious problem: Administrators operate on the belief that competitive foods generate revenues necessary to keep school budgets solvent when, in fact, the opposite is more often the case. Without evidence on the books, however, “They don’t even know they are losing money.”

Separate lines and color-coded tickets aren’t the only lunchroom practices that reinforce class inequality. Some school fundraisers, for example, offer cafeteria privileges. One Teaching Tolerance reader recently raised the alarm about the misuse of a “Fast Pass” program that allows students with a special $10 ticket (purchased at registration to support the athletic program) to go to the front of the lunch line. For students without Fast Passes, this system has consistently resulted in waiting longer to eat and finding that the most popular foods are gone before they reach the counter. The message to students? Money trumps equality.

Clearly, scrubbing all traces of stigma from the cafeteria won’t happen overnight, but a little awareness goes a long way. Seeking out and eliminating the most obvious causes of inequality in the lunchroom can pave the way for more educators and students to recognize and redirect subtler biases before they have a chance to take root.

She adds that, rather than increasing the cost of competitive food, districts often decrease food costs in the NSLP program to keep their budgets balanced—essentially rerouting money intended for low-income kids’ food to cover the costs of competitive foods they’re not allowed to eat. “I think this whole thing evolved unintentionally with a blindness that people were creating a de facto separate and unequal system,” says Bhatia. 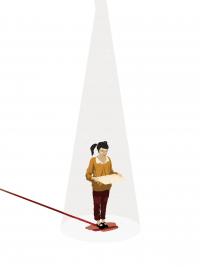 Bhatia’s response was to conduct a pilot study in three San Francisco schools in 2009 and 2010, integrating the lines by bringing competitive foods into compliance with NSLP nutritional requirements. Uniform electronic debit cards replaced segregated lunch lines and made it impossible to visually distinguish between prepaid cards and NSLP funds. The bookkeeping also changed. Whereas before, NSLP and competitive-food revenues had been lumped together, they would now be tracked independently. Federal legislation to this effect was put in place in 2010.

The results of this groundbreaking pilot study were dramatic. Participation in the NSLP increased by 58 percent, and school revenue skyrocketed. Lunch lines were similarly integrated in all San Francisco middle and high schools during the 2010–2011 school year. Bhatia calls it “the most effective and quickest advocacy work I’ve ever done.”

These types of changes are happening in more and more school cafeterias across the country. Cheaper and better technology is allowing the broader use of nondiscriminatory electronic debit cards or PINs. New rules on community eligibility based on a district’s SNAP enrollment are poised to go nationwide in the coming school year, which should make the NSLP available for more students and potentially reduce the stigma.

But—based on what happened with San Francisco—instituting a nondiscriminatory food program is the surest path to eliminating stigma.

“I would argue that there is absolutely no way to have two separate programs and not stigmatize the low-income kids,” says Kavanagh. “My hope is that we can just make it so hard to do it, that people will rethink what they’re doing and have that eureka moment that San Francisco had.”