Meet Kennedy, of Mombasa, Kenya. His wheelchair doesn’t stop him from making the world a more beautiful place.
Jerry McGill
Issue 51, Fall 2015
Add to a Learning Plan
X
Add to an Existing Learning Plan
START A NEW LEARNING PLAN
All articles from this issue
Print

Kennedy Nganga has a smile as bright as an elephant tusk shining in the sunlight. He lives near Mombasa, the second-largest city in Kenya, which is a very large country in the continent of Africa. In Mombasa people greet each other by saying, “Jambo!” Jambo is a fun word to say; it comes out of the mouth like a song.

Kennedy lives a very different life than many of his fellow Kenyans. He does not live in an apartment or a house. He lives in a small hut on a large and high mountain in a tiny village filled with huts just like his. There is no electricity in his hut. When Kennedy wants to use his cell phone he must charge it at a local café in a town miles away. It isn’t always easy.

Kennedy also has no air-conditioning and no fan, which can be a problem at times because it can get VERY hot in Mombasa. VERY, VERY hot! Everywhere you go in the streets you see that people’s shirts are damp with sweat. Their skin gleams in the light of a powerful orange sun hanging in the sky like a fiery basketball.

Kennedy’s hut has large windows and that helps some. Whenever you go visit him he is usually in bed surrounded by his canvases and his paintbrushes and palettes. Kennedy does not leave the bed often because it is more comfortable for him to stay there. You see, he is in a wheelchair and life in a wheelchair is not very easy in Kennedy’s village. The roads that lead up the mountain to his hut have large potholes in them. There are no sidewalks, only dirt pathways, and when it rains there is mud everywhere, thick like pancake batter.

And the best part is that Kennedy’s paintings help other people lead lives that they can enjoy as much as he enjoys his own.

Kennedy was not born with a disability. When he was around 16 years old he was a champion on his school swimming team. All of his friends called him “The Shark” because he was so talented and his skills so natural in the water. But one day he made a slight mistake. He wanted to cool off from the sun so he took a dive into the pool, but he did not know he was on the shallow end of the pool. He hit the water hard, and his neck broke when he hit the bottom. But, Kennedy smiles all of the time and he is not angry about his life. He knows that he is lucky to be alive, and he appreciates every moment he has.

Shortly after his stay in the hospital, Kennedy saw a television show about an American woman from California. She was in a wheelchair too and she was a painter. Watching her helped Kennedy realize that he could also do something creative and meaningful with his life. He talked to his mother about this and she saw how excited he was about this so she bought him a painting kit. Painting helped him heal and grow into a strong and creative person. He loves painting. Kennedy paints many different things: he paints faces, he paints animals, he paints beautiful skies, sunsets and star-filled nights. He just loves to have a brush in his hand and a brilliant white canvas in front of him. And the best part is that Kennedy’s paintings help other people lead lives that they can enjoy as much as he enjoys his own.

Whenever he sells a painting, Kennedy uses a portion of the money to fund his charity, the Momma Kennedy Fund, named for his mother. This is a charity that helps children with disabilities and their families in Mombasa by providing them with a female goat and chicken. The female goat helps the family have milk, and the chicken helps them have eggs. This one gift can feed a family for a very long time, and they are always grateful to Kennedy for his compassion and his generous heart.

Kennedy did not let the difficulties of life stop him from being kind and happy. From a tiny hut on a high mountain that kisses the pale blue sky, he is making the world a better place.

Here’s a selection of Kennedy Nganga’s beautiful artwork, as well as statements from him about his paintings. All photos are courtesy of Nganga. 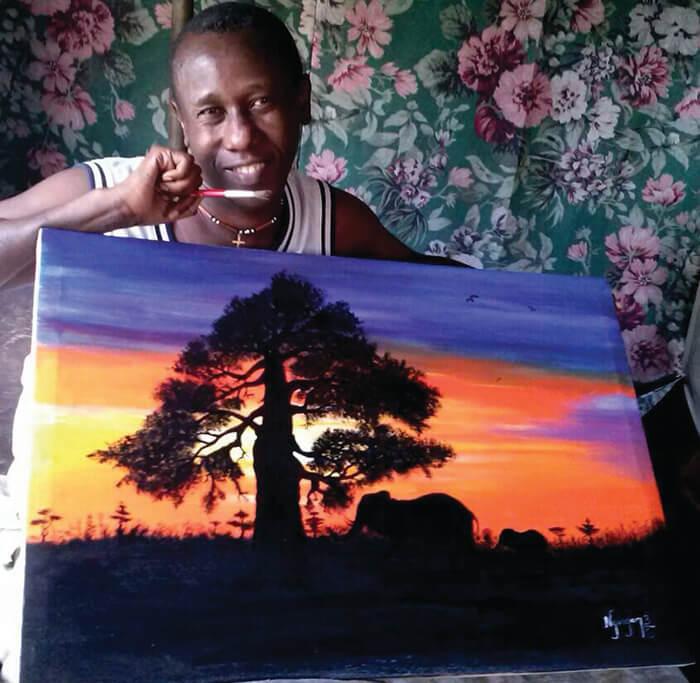 In all my paintings, I start with sketching so that I get proportions right. I normally start working with the lighter colors and end up with darkest.

A very technical and detailed painting can take me to up to a month, but an easy one can take between three days to a week.  This is due to the poor grip [of] my fingers. 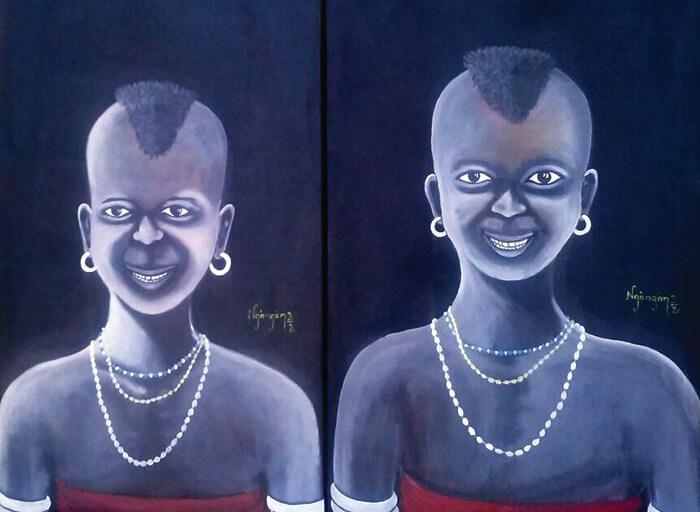 The Kenyan Turkana tribe lives in the northern part of our country, which is a very hot semi-desert. The people dress very scantly due to the heat.

The bead[ed] jewelry signifies that they are still maidens. It will increas[e] as they grow, and by the time they will be old women, they will have a lot.

The hardest part of drawing humans is the proportionalities and gestures. The face is the most complex, especially when you are doing a portrait of a specific person. One also has to get the highlights right. 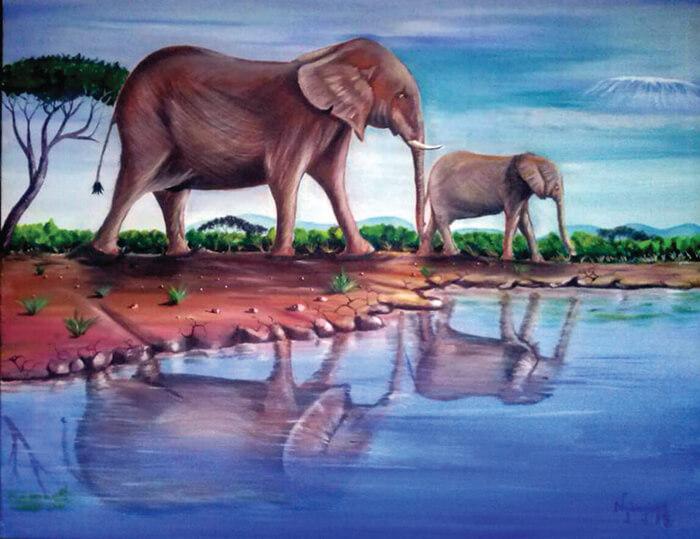 I love painting elephants and call them the Gentle Giants. They are very impressive in their character. So much like human[s]. They are a symbol of heritage and pride among our people.

I do not see elephants daily, but we have an elephant sanctuary less than 100 kilometers from where I live.

The hardest part in drawing the animal is sketching the right shape and proportions. One has to understand the body language of the animal and [their] gestures. 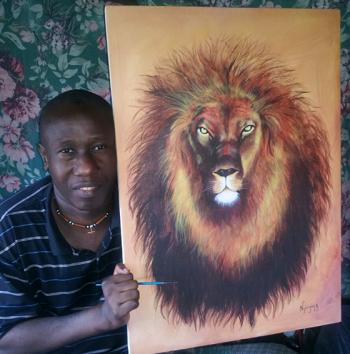 Cecil was not just any lion. He had a legacy he had lived, seeing people that he became accustomed to. This made him a symbol of heritage.

His death was like a fall of a comrade. I love animals, and it saddened me.

It was the death of His Majesty Cecil, the king of the jungle.

Right There (In the text)

What did Kennedy’s mother buy for him?

What challenges does Kennedy experience due to not having electricity in his home?

How can you tell that Kennedy is not angry about his life?
How would you feel if you were in his situation?

How can you help children with disabilities and their families?

Use this reading activity to explore students’ ideas about disability.