It was pure coincidence that, during a recent trip to Northern California’s wine country, Kevin Gover, director of the Smithsonian’s National Museum of the American Indian in Washington, D.C., stumbled upon a perfect illustration of what’s wrong with history instruction in the United States. He and his wife were visiting an original Spanish mission at the same time as a group of fourth-graders. Gover watched as teachers and chaperones dressed as Franciscan friars led the children, who were dressed as Indians, through a series of quaint activities. “They were making candles. They were spinning wool, weaving baskets. The message of the day that a kid would come away with is, ‘Wow, it was fun to be an Indian at the mission,’” Gover says. “The reality was that the mission system was astonishingly brutal. Obviously we don’t want to teach fourth-graders about murder and slavery, but they also shouldn’t come away believing the mission system was good for the Indians.”

This kind of Eurocentric approach to American history will come as no surprise to many educators who work from scripted U.S. history curricula. Aside from some obligatory lessons about Pilgrims and Indians at Thanksgiving and maybe a retelling of Pocahontas and Sacagawea’s contributions to Anglo exploration of the New World, generations of American school children grow up effectively ignorant of the tragic and complicated story of this nation’s original inhabitants. It’s no wonder that many educators themselves lack the foundation necessary to change the conversation. It’s a vicious cycle governed by inertia, and it’s been like this for as long as anyone can remember. “We aren’t seeing any important progress in student performance among Native Americans, and the non-Indian students aren’t learning about Indian things any more effectively than they have in the past,” Gover says. “We know teachers are teaching about Indians as required elements of their curriculum, but we also know that the textbooks haven’t changed in decades and that the information that is being put forward simply is not very good. It’s, at best, incomplete, and at times, absolutely inaccurate.” 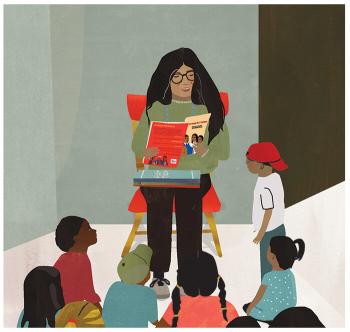 To address this, Gover and his team at the Smithsonian are gearing up to unveil a program called Native Knowledge 360, a nationwide curriculum initiative to make comprehensive  Indian education a priority. In pockets of the country, culturally responsive educators, many of whom have been hard at work on various facets of this issue for decades, are waiting with bated breath.

“We’re a textbook-oriented society and the textbooks, when they deal with Indians, don’t have a lot to say, or it’s all Manifest Destiny, so you’re really on your own to develop curriculum,” says Jon Reyhner, professor of education at Northern Arizona University and the co-author of American Indian Education: A History. Reyhner, who taught Native students for four years at reservation schools and spent another 10 years as a school administrator, understands how difficult it is for even the most well-meaning teachers to tackle this challenge on their own. “When you’ve got the class sizes that teachers have, asking them to do much curriculum development is a recipe for burnout.”

And that’s assuming the issue is on educators’ radars at all. Although there are 567 federally recognized tribes in the United States, American Indians and Alaskan Natives make up just 1 percent of the population, and most are concentrated in Alaska and the West, along with a few areas in the Great Lakes region and the far Northeast. Not surprisingly, these are the only areas where the needle is being moved on this issue. Montana, Utah, South Dakota, Washington, Wisconsin, Maine and Minnesota all have legislative language or laws calling for comprehensive teaching of Native history and culture. But the implementation varies drastically from state to state depending on how much funding, staff support and political will exists to make the leap from policy binder to classroom curriculum.

Montana stands as the notable exception. Its aptly named Indian Education for All (IEFA) Act mandates a “culturally responsive” curriculum approach that requires school districts to collaborate with tribal leaders and provide every student a comprehensive education on Native history, culture and tribal sovereignty. But public school students are not the only target audience. A key component of Montana’s success (in addition to robust funding and a dedicated team of support specialists who ensure IEFA compliance) is its emphasis on pre-service professional development. But while providing teachers with the education and confidence to teach this content can help break the cycle of ignorance, advocates have found that getting started isn’t always easy.

“People are not that eager to learn it at first, I must be honest,” says Jioanna Carjuzaa, who facilitates IEFA professional development for the Montana State University system. “Teachers are products of the same K-12 system. What happens on that journey is very limited. I think it is really difficult because you’re asking people for a major paradigm shift. Even in a state where we have tons of materials and professional development, we’re asking teachers to teach about something they don’t have a good understanding about or knowledge base [for].”

People indigenous to the land that is now the United States use both terms, but not everyone is comfortable with both. Teaching Tolerance recognizes the limitations of these identifiers. We use tribal names whenever possible, but—when writing more generally—have opted to use the noun American Indian and the modifier Native based on the recommendations of our advisors who identify as members of this diverse group.

Anna Baldwin, a 16-year veteran English and multicultural literature teacher on Montana’s Flathead Indian Reservation, knows this struggle well. “One of the things teachers are worried about is, when they are not Indians, how do they do it? Even down to what words you should use,” she says. As a white woman teaching at Arlee High School, which is 70 percent Indian, Baldwin has had ample opportunity to test what works and what doesn’t. “I think it’s really important for students to learn about place, the place where we live,” she says. “But I think just as important is that it’s contemporary, so we’re not just looking through historical lenses, which is how Indians are often presented in textbooks and other materials. Indians are always [pictured] in black and white.”

To connect the dots between past and present and give students a sense of history as a living, breathing entity, social studies teacher Paul Rykken and his colleagues at Black River Falls High School in Wisconsin found that an integrative approach worked best. “In each of our social studies programs where it seemed natural to bring in Native history, we started to do that,” he says. “For example, I teach a politics course, and we started to teach the U.S., Wisconsin and Ho-Chunk constitutions in parallel. And that was kind of an interesting, nonthreatening way to bring that in. I’ve always thought that, if you could get the concept of sovereignty across well, many of the other things fall into place.”

Rykken has been teaching at the school since 1990, the year Act 31—a mandate similar to Montana’s IEFA—first went into effect. Although he’s quick to point out they still have a long way to go, Rykken has seen a definite shift in the mentality surrounding teaching American-Indian history. “In the early stages, there was more resistance from the non-Native population,” he says, echoing Carjuzaa’s and Baldwin’s observations about Montana. “But I think a lot of that has gone away. And it’s been interesting to watch that. I think we’ve got kids talking about things that before they weren’t really comfortable talking about. And, I don’t want to make this sound better than it is, but getting kids to talk and have thoughtful discussions about race is very challenging. It’s a team effort. It isn’t something that just happens. You’ve really got to be deliberate about it.”

The good news is that progress, while painfully slow on the whole, is being made. An increasing number of states are taking notice of Montana’s successes and moving toward similar models. Washington just signed its own promising Indian education mandate (SB 5433) into law this May, after a protracted struggle by advocates to change language from “encouraging” schools to integrate tribal history, culture and government into their curriculum to making it mandatory. “There are so many people across the country who are working very, very hard to make sure that American Indians don’t continue to slip through the cracks, and that we create a growing awareness of American-Indian history, identity and contemporary issues,” says Mandy Smoker Broaddus, the director of Indian education at the Montana Office of Public Instruction.

Fortunately, online access to a host of excellent, free resources means teachers no longer have to wait for policy changes at the top to start improving how this subject is taught in their classrooms right now. (For specific examples, see the toolkit that accompanies this story.) It will take work, but more and more educators are seeing the value in resurrecting a subject that has been sitting on the back burner for far too long. “The history that we’re trying to put in place is the best for all the students,” says Rykken. “I know that sounds idealistic, but I absolutely believe that. We’ve got to get away from this kind of one-dimensional, Eurocentric version of the history. It’s much more complicated. There is a way to do it, but it is a challenge.”

Debbie Reese was a schoolteacher in New Mexico and Oklahoma before getting her Ph.D. in curriculum and instruction at the University of Illinois and becoming a vocal advocate for stronger American-Indian curriculum. In 2006, she created American Indians in Children’s Literature (AICL), a blog that highlights positive views of American Indians in children’s literature and works to change negative stereotypes portrayed in commonly taught books. It was a response to obvious education gaps she was aware of, going all the way back to when she was a child growing up on a small Pueblo reservation in northern New Mexico.

“My clearest memory was that the Indians I saw in books and movies were not real,” Reese says. “I knew what real was. I knew our dances and our practices and what we were. And we called ourselves ‘Indians.’ It wasn’t until I was much older that I realized there were a lot of different tribes in the country. It wasn’t just us. And that speaks to what we got in school. Not much.” That’s because the curriculum delivered in schools across the United States is very much alike, she says. “It doesn’t matter if you’re going to school in Rhode Island or you’re going to school in New Mexico, you’re going to get the same instruction.”

Reese sees literature as an obvious way to fill in those gaps left by the standard textbook curriculum. One of her favorite sources for such books is Birchbark Books in Minneapolis, Minnesota, which is owned by Native writer Louise Erdrich. “That’s where I buy a lot of books from because I know they’re careful in their selection and they’re looking for the same kinds of books I’m looking for.” Reese also points to the grassroots campaign We Need Diverse Books, which aims to address the lack of diversity in children’s literature. For a list of her recommendations of the best books and authors on American-Indian subject matter, and to find out more about her efforts, visit her website.

Check out this list of online resources for teaching about American Indians.