The Young and the Registered

Last March, the rattle and thump of drums filled the foyer of Marie Sklodowska Curie Metro High School as the school’s drum corps led dozens of students out of the building and onto the sidewalks of Chicago’s South Side. The young marchers waved hand-drawn signs, laughed, chatted and chanted as they made the two-block rite of passage. But the parade also carried an air of seriousness. These students were on a Parade to the Polls, headed to vote in a runoff election that would choose the next mayor of their city. Many of them would be voting for the first time.

The parade was not some one-off civic event. It was the culmination of a voter education and registration program that paired social studies classes with Chicago Votes, a nonpartisan group that advocates for the rights of young voters. Staffed by activists, the organization has cheerfully hammered away at institutional barriers that make it more difficult for young voters to reach the ballot box—successfully lobbying for same-day voter registration, for example. The group is also directly engaging youth on the city’s South Side, which includes many of the city’s lowest-income neighborhoods. By its own count, Chicago Votes has registered some 22,000 new voters.

“We want to beat back the narrative that young people don’t care, that they’re apathetic,” says D.J. Jackson, Chicago Votes’ organizing director. “After so many years of disappointment, a lot of them are in places where they feel nobody cares, no one is looking out for them. It’s very important they know that we hear them, that we understand where they’re coming from. Then we have a chance to show them the changes they can make by becoming politically active and voting.”

Inspiring a Next Generation of Voters

The history of voting rights is a staple of American history courses and of most state social studies standards. The unsteady march toward equal access to the vote includes the extension of suffrage to white men who did not own property, to African-American men, to women, to Native Americans and to younger Americans (the voting age used to be 21). In many instances, young activists were on the frontlines, flanking the forces of disenfranchisement. These individuals and movements endured censure, slander, imprisonment, physical violence, terrorism and even murder.

Today, barriers to voting may be subtler, but they are no less real. The 2013 Shelby County v. Holder decision, for example, reversed key provisions in the Voting Rights Act of 1965, a decision many voting-rights activists worry has already disenfranchised thousands of black voters in the South. Mobilizing the next generation of voters—and activists—is critical to our country’s electoral integrity. Yet voter turnout in the United States is among the lowest of the world’s democracies, hitting a 70-year low during the 2014 midterm elections.

As a demographic, young Americans rarely have been enthusiastic voters. In terms of turnout, a stubborn gap of about 20 percent has divided them from their elders. In 2012, for example, only 41 percent of 18 to 24-year-olds voted, compared to 65 percent in the 25-and-over group.

A variety of factors contribute to the low turnout of young voters. For example, young adults are less likely to own property or have school-age children, two important drivers of political involvement. Institutional barriers, like the recent spate of new voter ID laws, also work against this group of voters. According to Project Vote, an advocacy group in Washington, D.C., 18 percent of 18- to 24-year-olds lack a form of ID that would allow them to vote in these states.

Still, the biggest barrier may lie within young people themselves. For some, the issue may be ignorance and uncertainty about the registration and voting process. For others, it may be cynicism about the value of their vote. In some locales, political races may be so uncompetitive that voters see no reason to show up, or they consider the candidates or issues demotivating.

The best way to reverse that trend is to prove to young voters that their vote counts, says Peter Levine, the Lincoln Filene Professor of Citizenship and Public Affairs at Tufts University. “We don’t do a very good job of encouraging participation,” he says. “And that means the interests of young voters, especially the non-college-bound and high school leavers, don’t get considered. The issues that could benefit them, like job training, won’t get a serious mention [in political campaigns], and that’s because they don’t vote.”

In some communities, however, educators, voter advocates and youth themselves are trying to change this trend by reaching out to reluctant voters and coaching them to get in the game.

I try to get a sense of what they care about. Do you care about police accountability? Educational opportunities? Gang violence? Then we discuss how voting can influence those issues.

Chicago Votes gets personal in its efforts to convince young people that voting gives them a voice. They start off all youth voter outreach efforts with surveys and listening sessions.

“I try to get a sense of … what they care about,” says Caleb Porter, a Chicago Votes youth organizer. “‘Do you care about police accountability? Educational opportunities? Gang violence?’ Then we discuss how voting can influence those issues.” Porter, 21, credits Chicago Votes with converting him from a nonvoter into a believer in the power of politics as a force for change. Once potential voters link the personal to the political, registering and voting become acts of self-empowerment, Porter says.

Groups like Chicago Votes, Empower Alabama, Rock the Vote and the League of Women Voters view high schools as effective platforms to promote voter self-empowerment. In schools, students can learn about power politics and the role it plays in representative democracy. Educators can also create forums for exploring issues that directly affect students and their families, including discussions about where those issues intersect with electoral decisions. With effective instruction—and some positive peer pressure—voting can become a core civic duty, both relevant and cool.

In-school voter education is especially effective when paired with the removal of institutional barriers to voter registration. Same-day registration is one approach currently used to encourage greater voter participation in 11 states plus the District of Columbia. Some states even require in-school voter registration drives. A few communities have experimented with lowering the voting age to 16 for local races and referendums.

According to a recent Duke University study, Making Young Voters: The Impact of Preregistration on Youth Turnout (2014), voter preregistration may be the most effective reform states should consider if they want to grow new voters. Preregistration, currently in place in 12 states, allows youth to register to vote in their mid-teens, perhaps when they apply for a driver’s license. Their names are then automatically added to the voter rolls once they turn 18. The Duke study estimates the preregistration laws increased young adult turnout by 8 percent. 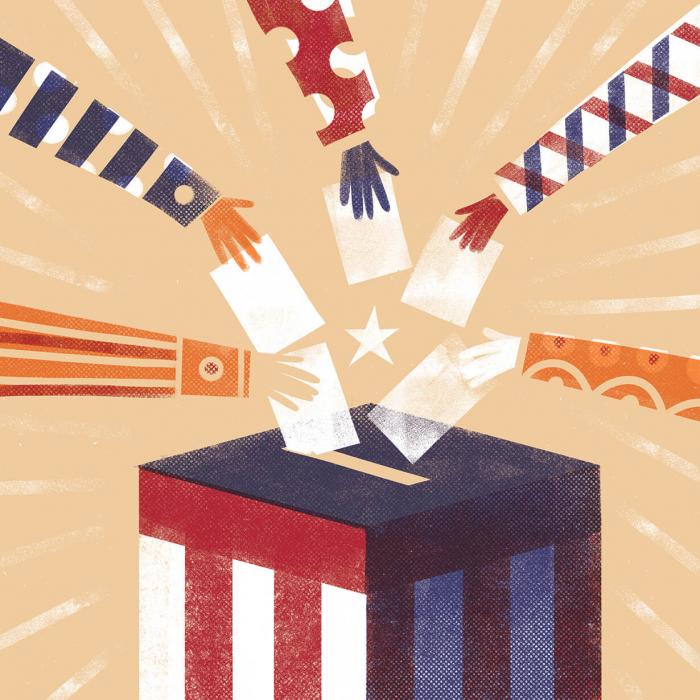 The key to drawing teens into the political process is to make it matter, Levine says. That means facilitating meaningful discussions about potentially contentious issues. “It’s a losing proposition to say what we need is controversy,” he says. “But we need to discuss and debate real issues and be OK with controversy. To do that, teachers have to be confident they won’t have to look over their shoulders.” In other words, administrators need to be on board with the mission and be willing to deal with conflicts that may arise when teachers encourage political debate in the classrooms.

Adam Heenan, a social studies teacher at Curie High, strongly agrees with Levine. “If we don’t engage with issues important to our kids, if we aren’t real about the practices of political power, we risk losing the trust of our students. Do we want a next generation resigned to doing what it’s told? Or one that builds the America it wants?”

These are not just rhetorical questions for Heenan. He encourages his students to register, vote and not stop there. In his civics classes, he teaches students about the myriad ways they can engage and influence the political process—from attending school board meetings, to writing letters, to urging friends and family to register and vote to political protest. He also has accompanied his classes on field trips to Springfield, Illinois, to lobby lawmakers at the state capitol. He wants students to see for themselves that state officials are flesh-and-blood decision-makers who are accessible and responsive. He wants his students to see where their votes end up.

Voting, with its winner-take-all dynamic, can be disheartening in the face of a big loss, Heenan explains. By remaining engaged on political issues they care about, young people can continue the struggle to shape the communities and country they want to live in, even if an election is not imminent or if the “other side” takes a big electoral win.

As research shows, young voters are much more likely to become lifelong voters. The mechanics of registering to vote and voting are important, and schools can be catalysts for establishing civic engagement as a habit.

There is an additional opportunity for educators, administrators and activists bold enough to collaborate with students in promoting in-school political engagement: When young Americans articulate, debate and take action regarding issues that matter to them, they are no longer bystanders to American politics. They become stakeholders. They become citizens.

For the College-bound Voter

In autumn 2016, hundreds of thousands of young adults will leave for or return to college. Before they go, they should have a plan in place for casting votes that will count in November.

The U.S. Supreme Court has ruled that students are considered residents of their college communities, if they so choose. However, different states have different voting rules that can affect college-based voters. In some, students can be legally registered to vote, but unless they have an officially approved form of photo ID—one reporting their current address, for example—they may still be turned away or told to fill out a provisional ballot that may or may not be counted.

If students have questions, they can check with their school’s office of student affairs, the League of Women Voters or the local affiliate of their political party. They should give themselves sufficient time to get an approved ID or meet other voter registration requirements, if needed, before the next general election.

There are valid reasons college students may choose to vote in their home districts via absentee ballot. They may feel strongly about important races or issues that are on the ballot in their communities. Also, if they have scholarships funded by the state or a local organization, they should review the scholarship terms. Eligibility may depend on maintaining home-state residency.

The process for applying for an absentee ballot differs among states. Students can check the website of the League of Women Voters to find out what rules may apply to them.

The Young and the Registered

Mobilizing the next generation of voters and activists is critical to our country's electoral integrity.This hour-long webinar will offer ways to energize students regarding power politics and the role voting plays in representative democracy.
Bookmark This PageSave