Nothing About Us Without Us Is for Us

Youth activist Hazel Edwards recounts her journey from being pushed out of school to teaching her district how to serve transgender students.
Maya Lindberg
Issue 57, Fall 2017
Bookmarked 28 times
Photography by Karsten Moran
Add to a Learning Plan
X
Add to an Existing Learning Plan
START A NEW LEARNING PLAN
All articles from this issue
Print

Meet Hazel Edwards, a passionate advocate and youth leader for Philadelphia’s trans community. At just 18 years old, she co-authored a policy for the School District of Philadelphia that established protections for transgender and gender-nonconforming students. Now 20, she serves as an educator and outreach specialist with the Attic Youth Center, the only independent LGBTQ youth center in Philadelphia.

Edwards recently earned her GED and is focused on starting her undergraduate studies; she eventually plans to pursue a career in social work and art therapy for trans youth. She spoke with Teaching Tolerance about her school experiences, her activism and how educators can be the advocates trans students need.

How did you become an advocate and youth leader for Philadelphia’s trans community?

I started doing my activism work when I was pushed out of my single-sex school in Philadelphia. My principal wanted to have a conversation about my absences and tardies, and I realized in the middle of the conversation that I was not able to explain myself without telling him that I’m trans and that not feeling comfortable at this school was a result.

He had no idea what I was talking about when I was trying to explain my gender identity to him, so he brought in the guidance counselor. The guidance counselor was telling me that I couldn’t get my hair done, my nails done or wear makeup, even though none of these things were against the rules. I just wanted to be able to express my gender, but I had no problem with the uniform.

[M]y guidance counselor said, “You are a boy,” and at that moment, I felt like she was using her own internal bias to dictate the ways that she did her job. I felt invalidated. I felt like there’s no point [in] finishing this conversation, so that’s why I packed up my stuff and never went back to that school as a student.

That’s what made me a youth leader in the trans community.

Over time, within doing the work at the Attic, my old school actually requested a sensitivity training. I was one of the co-facilitators doing the gender and sexuality training for 86 of my old faculty members. After the workshop, my old principal came up to me and said, “The student is now the teacher,” with tears in his eyes. That was also one of the most empowering moments for me, where I knew I had a gift of being able to share my story and to inspire folks.

I read the following quote by you: “Nothing about us, without us, is for us.” What meaning does it hold for you?

If youth, and specifically trans youth, are not given seats at the table to be able to bring their perspectives and their experiences and the ways that they could be best supported, then the policy or the legislation or whatever the rule is will not adequately support [them].

Cisgender folks don’t know all of the necessary needs of trans folks. “Cisgender,” C-I-S, meaning “same” in Latin, means your gender identity and assigned sex align. And predominantly cis and straight folks are the ones making the policies and making the legislation about trans people and about LGB people.

You co-authored the School District of Philadelphia’s Policy 252 that put in protections for transgender and gender-nonconforming youth. How did this policy come about?

A University of Pennsylvania professor wanted to get protections for her trans daughter, so she came to the Attic Youth Center. I shared my experience, as [did] three other young folks at the Attic. All of us sat in a meeting with some folks from the Philadelphia school district and with the parent. The school district heard our stories and said that something needs to be done but that’s a thing that we’ve always heard and nothing ever came out of it.

So the parent, the professor at Penn, came to Justice League meetings and we looked at model policies. A lot of the model policies out there don’t talk about gender-nonconforming identities or nonbinary identities, or give many protections to those trans folks.

One of the things that we saw was a lot of language of “consistent and persistent.” “If this young person is coming in consistently and persistently in the expression of their gender that aligns with their gender identity, then that young person’s gender identity will then be confirmed.” I never felt comfortable even walking through my neighborhood or going other places consistently and persistently in my gender identity as I am now. Also, for many young folks at the Attic Youth Center, they come in with one set of clothes, usually a school uniform, and then change their clothes for about one to two hours that they’re going to be at the Attic and then change back into their clothes that they came in with to leave. Maybe because that young person may not have accepting family. Maybe that young person doesn’t feel safe in their neighborhood.

After me and a few other folks crafted the policy, the professor sent it out to the district and it almost immediately was unanimously passed. I saw it on the news one day when I was walking home, and I was extremely happy and ecstatic. If a young person comes out to you, [under] this policy the administration has to support them. The administration has to honor their identity and their pronouns and their names, which is very powerful. I wish it was a policy that I could use for myself when I was in school.

And the only thing that the Philadelphia school district added is that every staff member has to be trained on gender identity. That’s what brought me into helping with training for thousands of faculty members in the Philadelphia school district. I, [along with about 20 other trainers], did the training specifically on gender identity, gender expression and assigned sex.

Read the School District of Philadelphia Policy 252 on transgender and gender-nonconforming students.

How can educators create trans-inclusive classrooms and schools?

Throw some trans history in there. Throw some queer history into your classes—in positive ways. In history class, you could talk a little bit about Stonewall while talking about civil rights movements. You could also name that Stonewall was started by Marsha P. Johnson, a black trans woman who threw a shot glass and a brick that initiated the Stonewall Riots, which is the reason why we have gay pride.

If LGBTQ youth don’t see themselves represented in the curriculum that they’re being given, they could totally zone out of it and disengage from education altogether.

[Celebrate] Day of Silence for those youth who don’t have voices or that are not confident or comfortable enough with having their voice out there.

Intervene, step in if [you] hear homophobic or transphobic comments with adequate disciplinary action, instead of just throwing it under the rug, which is what I hear from a lot of interviewees when I interview trans youth for the School of Social Policy and Practice at the University of Pennsylvania. That is one of the main things that I see: lack of advocacy from cisgender allies for the trans community. 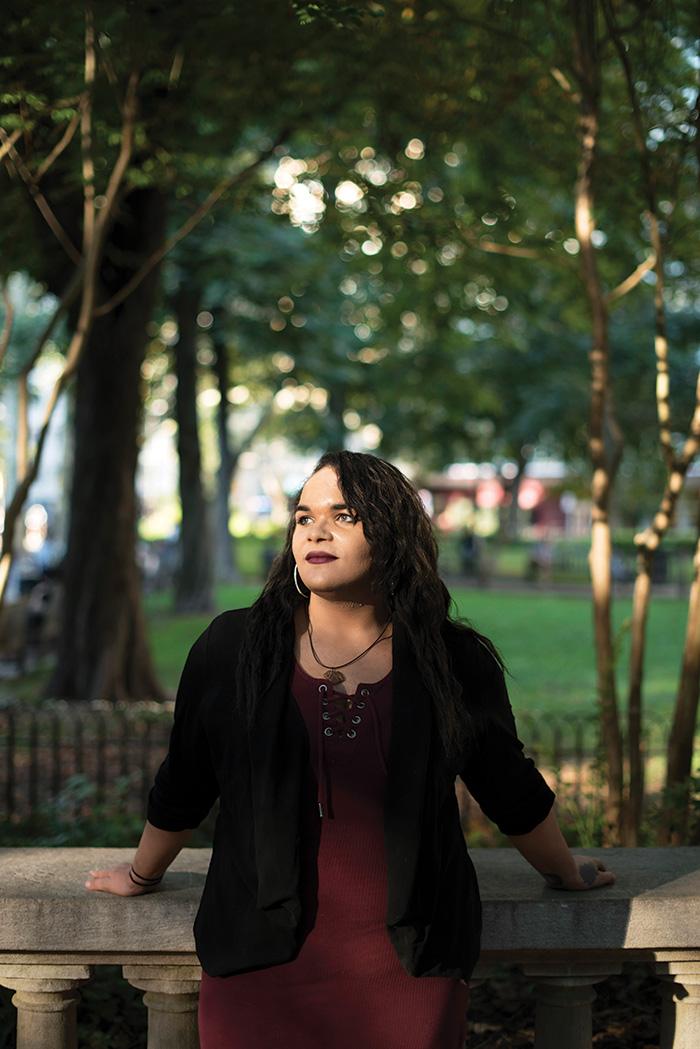 Is there anything you would like to add that we haven’t talked about?

That ultimately resulted in me not feeling safe or comfortable in the household anymore, so I was basically given invitations to leave and I took it. I’ve experienced time being street homeless, couch surfing and sometimes my mom would let me come in and then something would happen and I would leave again. Probably for about a year or so, I would say I was bouncing back and forth. I would identify myself as being homeless because I was unstably housed and supporting myself.

But because of the work and the advocacy I’m doing, I’m now able to financially support myself, which is a blessing. I wouldn’t have known that half of Philadelphia would know who I am in the LGBTQ community. I didn’t know that I would win a National Youth Leadership award from [the National LGBTQ Task Force]. All of these things just kind of happened, and all I was doing was the work that I’m passionate about.

Lindberg is a former writer and associate editor with Teaching Tolerance.

Stonewall’s history remains largely forgotten—and unknown among young people. In the cultural imagination, it remains shrouded in myth. But the true Stonewall story can be taught. Here’s how—and why.
Cory Collins
Bookmark This PageSave