Dim the lights and get ready to learn with these TT-approved films!
Issue 65, Fall 2020
Add to a Learning Plan
X
Add to an Existing Learning Plan
START A NEW LEARNING PLAN
All articles from this issue
Print 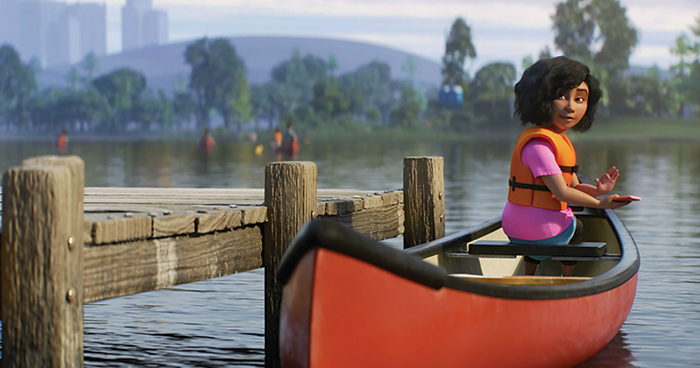 Pixar’s Loop tells the story of Renee, a non-verbal autistic girl of color. Voiced by Madison Bandy, a voice actor who is autistic, Renee communicates using gestures, sounds and her smartphone. At her canoe camp, Renee is joined on a day trip by neurotypical camper Marcus. Although they don’t use the same methods of communication, Marcus and Renee make it through a tough time, and the two build a much stronger understanding of one another and their realities. Their adventure offers a gorgeous story of identity and diversity, and it also exhibits the importance of empathy. (11 min.)
Available on Disney+ | Elementary School

“For us to be labeled as climate change refugees, in a way, is kind of harsh … but I haven’t been able to put another word in its place yet.” Chris Brunet struggles to understand what it means to be an American and a refugee in the United States, but he can’t seem to define his story any other way. Lowland Kids paints a grave and intimate portrait of the effects of climate change by giving viewers a glimpse into the lives of a few residents of Isle de Jean Charles in southern Louisiana, which has lost hundreds of acres to rising ocean levels. In addition to Chris, the film follows his niece Juliette and nephew Howard, along with other residents, as they navigate being forced to leave the only place they’ve ever called home. Lowland Kids is a beautiful yet solemn picture of the real consequences of climate change taking place in our country, and it serves as a warning of what might be on the horizon. (22 min.)
Available on HuffPost | Middle and High School

A brief yet poignant film, Twenty & Odd offers viewers imagery of Black life inspired by Maya Angelou’s poem “Still I Rise.” Produced by the National Park Service and narrated by Angelou, the title refers to the number of enslaved Africans who were brought to the shores of Virginia in 1619. This visually stunning short shows Black people against the backdrop of national parks and historic sites, and it parallels Angelou’s messages of fear, pain, resilience, joy and liberation. We recommend this video and its accompanying text to start discussions about symbolism, the impact of slavery, family, cultural expressions, innocence, communal gatherings and intersectionality. (4 min.)
Available from the National Park Service | Middle and High School

Presented by the Southern Poverty Law Center, Bibi is a story of identity, family and forgiveness. After he gets a call that his father has died, Ben—or Bibi, as his father called him—visits the Rio Grande Valley in Texas where he grew up. The film tells the compelling story of a new beginning for the relationship between Bibi and his father, years after they last communicated, and even after his father’s death. Bibi centers the main character’s Latinx and gay identities and offers educators a key to unlocking conversations about communication, understanding, identity and intersectionality. The film is accompanied by lessons for grades 6-8 and 9-12. (18 min.)
Available at tolerance.org/bibi | Middle and High School

Crip Camp, a Netflix film directed by Nicole Newnham and James LeBrecht, documents a little-known story in the disability rights struggle. It’s no coincidence that so many of the leaders of the disability rights movement went to the same summer camp in the 1960s. The liberating environment this group of young people experienced—and helped to create—at Camp Jened directly inspired their role in some of the key moments in disability rights history. This funny and heart-wrenching film challenges us to create empowering spaces in our own lives, schools and classrooms. (106 min.)
Available on Netflix | Professional Development