Candles in Our Windows

A play based on real events in Billings, Mont., illuminates issues of tolerance and understanding for young students.
Kathryn McGrath
Issue 27, Spring 2005
Bookmarked 2 times
Illustration by Kara Fellows
Add to a Learning Plan
X
Add to an Existing Learning Plan
START A NEW LEARNING PLAN
All articles from this issue
Print

A group of skinheads stands outside a house on a quiet snow-covered street. Armed with a rock, they begin to sing, "Look in the window, what a strange light, something's not right." The singing skinheads appear in the opening scene of "Candles in Our Windows," — also titled "Nightlights" — a play developed for elementary and middle school students about how residents in Billings, Mont., took a stand against hate.

Last March, the 6th-grade students of Woodland Elementary School in New Jersey performed an early version of the play based on a children's book, The Christmas Menorahs: How a Town Fought Hate, by Janice Cohn. Now the play, music and an accompanying discussion guide are available to the public.

While teachers Patricia Clark and Delores Olma chose the play to conclude a unit on World War II and offer an uplifting end to a long discussion of the Holocaust and American use of the nuclear bomb, they were amazed at the connections the suburban 12-year-olds made between the play, their own lives and the nightly news — from the FBI's detention of local Muslims to problems at school.

"The message of the play hit so many areas," Clark said. "From bullying to religious tolerance, discrimination and things going on in our country — every neighborhood has had some sort of incident, and it leaves the kids with so many questions."

The play details how the city of Billings responded when Jews and people of color were targeted anonymously by white supremacists. After rocks were thrown through the windows of homes displaying Hanukkah decorations, many people in the town placed drawings and photocopies of menorahs in their windows as a sign of support.

"Kids need to know that they can be their own heroes when they see people being bullied and when they see prejudice," said Cohn, a psychotherapist who's written several other children's books. "The play deals with the power of the bystander, character education and moral courage."

'To walk in their shoes' 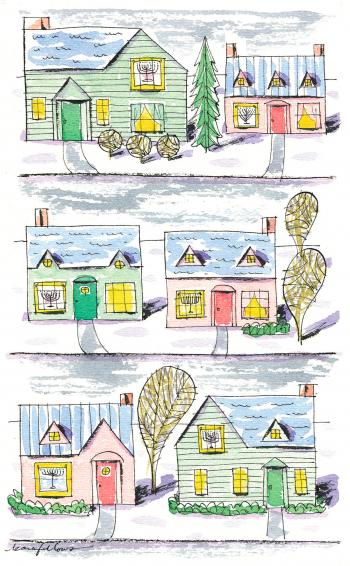 In 1993 skinhead groups were actively trying to organize in Montana. In Billings, swastikas and hate literature appeared around the city, windows were broken and headstones in the Jewish cemetery were overturned. A few skinheads appeared at Sunday services at a local African-American church. The vandalism was anonymous and sporadic but succeeded in frightening the intended targets — people of color and Jews.

For the Billings police chief, Wayne Inman, these crimes of intimidation were not simply misdemeanors but threats of far greater violence to come. Several progressive organizations organized a community response to the neo-Nazis in their midst, holding a march, writing letters and resolutions, gathering signatures on petitions and urging people to take the threats seriously.

Then in December someone threw a chunk of concrete through a window adorned with Hanukkah decorations. That broken glass — covering the floor of 5-year-old Isaac Schnitzer's bedroom — galvanized a community, attracted the attention of the nation and sparked a national activist campaign against hate crimes.

Billings' display of menorahs was inspired by the tale of Denmark's King Christian (which is recounted in the play) who reportedly wore a yellow star after the Nazis conquered his country and threatened to round up the Jews. Although the story isn't true, the Danes helped many of their Jewish neighbors escape from the Nazis.

At Woodland Elementary School, Clark's students read Lois Lowry's Number the Stars, a fictional account of a young Jewish girl's escape from Nazi-occupied Denmark. The inclusion of a historical precedent for the citizens of Billings' actions offers students a sense of the importance and relevance of history.

As the story of the Danish Jews' escape from the Nazis inspired the residents of Billings, Cohn and Clark think "Candles in Our Windows" inspired Woodland students to act more conscientiously and consider the power of their own actions.

Jillian Jimened, a Woodland student who played Isaac's friend Teresa in the production, said the play was especially powerful because it was based on real events.

"Because we were reenacting it, you felt their emotion and you got to feel what they felt and see what it was like to walk in their shoes or change places for a day," Jimened said.

There was less bullying at Woodland after the 6th-graders performed the play for the school, she added. "I think it changed (the students who picked on other students) because they know how cruel they are now and how horrible they looked when they bullied people."

A play based on real events in Billings, Mont., illuminates issues of tolerance and understanding for young students.

The power of the play

David White, director of education at Passage Theatre in Trenton, N.J., said performing a play allows students a deeper insight. "You are forced to become an active participant in the actions on stage — it deepens your understanding," he said. This winter the theatre will produce "Candles in Our Windows" with a cast of professional actors and children.

At Woodland Elementary School, Clark said the play's message of tolerance for others wasn't lost on the students after rehearsals ended. "It affected the school community," she said. "Many unusual friendships developed between some kids that wouldn't even usually be talking to one another."

In focusing on the Schnitzer family and telling the story from the perspective of young children, the play simplifies the events that occurred in Billings. But supplementary educational materials, which include actual interviews with the Billings residents who organized the town's response, allow students to explore the events in greater depth and consider the difference between fact and fiction.

In the play, as in real life, the skinheads were never caught or prosecuted. Many young students find this disconcerting.

"Kids always ask 'Did they ever catch the person?'" Cohn said. "And we talk about what's more important — that they catch them or what happened in that town. Kids live in a world that isn't fair and the good guys are often as violent as the bad guys. Everything doesn't have a neat ending like on TV."

Since 1993, when Billings residents Margaret MacDonald, Wayne Inman and Tammie Schnitzer organized their neighbors to counter skinhead threats, they've seen themselves portrayed in a made-for-television cable movie, a children's book and as puppets. They also appeared themselves in the PBS-produced documentary, "Not in Our Town."

Margaret MacDonald, whose idea of distributing and displaying menorahs throughout Billings ignited a movement, continues her work with the Montana Association of Churches in a new program organizing community study circles around issues of racism and diversity called "Now in Our Town."

"The story of Billings embodies how people believe the world ought to be run," MacDonald said. "It touches on First Amendment freedoms (and) civic responsibility; it's about multiple faiths finding ways to validate each others' liberties and freedoms, and of course, the power of walking in someone else's shoes — putting the menorah in the window when you're not Jewish. It's a transformation of violence and hate into peace-making."

Tammie Schnitzer now lives in Mount Pleasant, S.C., with her two children where she is studying anthropology at the College of Charleston. Isaac now is a junior in high school, while Rachel is in 7th grade.

On Isaac's bedroom wall is a framed drawing, signed by Bill Clinton and featuring a menorah with 12 candles with the message: "Isaac, I'm sorry that happened." The picture was drawn by the Schnitzers' young neighbor Rebecca and delivered in person the day after the vandalism story appeared in the local newspaper.

A decade later, the memory of Rebecca's gift is enough to make Tammie Schnitzer's voice catch.

"It will always be one of the extraordinary moments of my life. When my children say, 'Why are they making such a big deal of it?' I get firm with them. 'You don't understand what it took to make that happen. Ten thousand menorahs didn't just go up – people suffered for it.'"

For Clark, the lesson learned was invaluable. And so was the impact "Candles in Our Windows" had on her students.

"It was the best experience I ever had as a teacher," she said. " I know they walk away feeling they would do the right thing."

Bringing 'Candles' to Your School

Teachers who want to produce "Candles in Our Windows" — also known as "Nightlights" — in their classrooms and schools can order the play from the playwright and composers. The hourlong musical includes six songs and can be adapted as a simple classroom exercise or a full-scale production. In addition to scripts, staging suggestions and vocal and piano scores, the play packet includes a CD with the full musical score and instrumental tracks so teachers may choose whether to use a student chorus, live music or simply play the CD in the background.

• To learn more about the documentary film "Not in Our Town," visit www.pbs.org/niot. Copies of the video are available for $99.