Flipping the Script on Bias and Bullies

Social justice theater can teach your students to take the story into their own hands.
Scott Hewitt
Issue 35, Spring 2009
Bookmarked 7 times
Illustration by Gilbert Ford
Add to a Learning Plan
X
Add to an Existing Learning Plan
START A NEW LEARNING PLAN
All articles from this issue
Print

"You people!" the cafeteria worker barks. "You come to this country, and you think it's a free lunch." She stands over the students, in her hair net and scrubs, glaring down at them. The kids, all students of color, sit at the table in a mixture of disbelief and outrage. Free lunch is indeed the issue. One of the students is on the school's free lunch program, and he was sharing his meal with another student — a violation of lunchroom rules. The act has uncorked a hidden stream of volatile feelings in the white cafeteria worker. She snatches the lunchroom tray from the students, who respond with disrespectful words of their own. Soon the whole group is in the principal's office, facing a lecture.

But then something amazing happens. A Latina grandmother shouts "Stop!"

Things do indeed stop. Because the office is not really an office — it's a set on a stage. The principal and cafeteria worker aren't really school employees — they're students, playing theatrical roles. Only the grandmother is real. And now she's climbing from the audience to the stage, eyeballing the "principal" coldly.

"You need to listen," she says, with steel in her voice.

All the World's A Stage 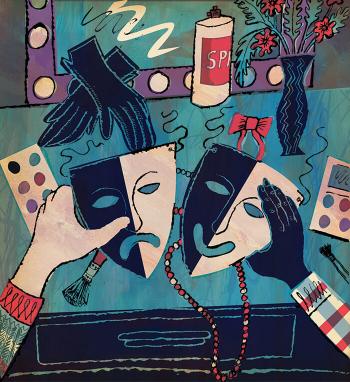 "She was this very quiet Hispanic woman, this little grandmother," said Stephen Clark, who watched the scene from the wings with astonished satisfaction.

Clark, the theater director at Tualatin (Ore.) High School, had been hoping this would happen. He is an advocate of Forum Theater, a dramatic method that sets up tightly scripted dramas of power and difference, then encourages the audience to intervene. If grandmothers are storming the stage at his productions, that's precisely the point.

"She underwent a physical transformation, and she was talking in a voice I didn't think could come from that little body," Clark said. "Watching the shows, she felt empowered to speak her mind to an authority figure — to the point where the other person, playing the principal, said, 'You're making some good points, we'll have to revisit this.'"

Forum Theater is the brainchild of Brazilian activist and director Augusto Boal. In the mid- to late- 20th century, Boal was a staunch critic of the policies that kept Brazil's poorest residents in conditions of scarcity.

Yet, as an actor, he was troubled by a growing sense that his own profession was part of the problem. By following the Aristotelian model of drama — the model of conflict, climax and catharsis that is so central to most of Western stagecraft — actors and producers were helping dissipate passions that could create positive social change, Boal argued.

"The problem with catharsis is that it doesn't leave people in an activated state," said Michael Rohd, co-founder of Sojourn Theatre in Portland, Ore., who has studied under Boal.

Inspired by the work of educator Paolo Freire, Boal created the Theatre of the Oppressed, a set of theatrical techniques — including Forum Theater — that challenges our assumptions about drama.

"Boal felt that theater should be the start of something," Rohd said. "You should leave the theater ready for action."

In traditional theater, there are actors and an audience. Boal took a different approach. He wanted "performers" (who begin a performance in the traditional actor role) and "spect-actors" (who begin the performance in the audience role, but quickly become part of the drama). To keep the show running, Boal appointed a "joker," a gadfly and facilitator who keeps the action happening, but never "directs."

Forum Theater is perhaps the most commonly-used method based on Boal's work — but by no means the only form. In Forum Theater, performers act out a short scene of interaction between an oppressor and a victim. After the scene is played out a couple of times, spect-actors are invited to take the stage, taking on the role of one of the performers, until finally someone finds a way to end the oppression.

Boal encourages experimentation, though, and the Theatre of the Oppressed has as many forms as there are practitioners.

Rohd, who has done Boal-inspired work in the K-12 setting, created a form called the "circle sculpture."

"You have thirty people or so in a circle, and a few people standing in the middle," he said. "The performers are asked to pose as statues — say, a statue of George Bush — and people from the circle come in and move the statues into poses that are meaningful to them."

Rehearsal for the Future

When Stephen Clark saw Tualatin High struggling with tension and hostility between the community's traditional white population and the burgeoning Latino one, he saw a problem tailor-made for Boal-based work. He wrote a grant to bring in his friend and mentor, Portland theater director Jeannie LaFrance, who had done workshops with Boal.

Clark and LaFrance worked with Latino and white students to create a series of original Forum Theater scenes that together became an interactive show called Hay problemas en Tualatin (There are Problems in Tualatin).

It worked. Audience members climbed right onstage and participated, becoming the characters and steering the action in a new direction.

"It's using theater as a way of seeing possibilities," LaFrance said. "Boal calls it 'rehearsal for the future.'"

LaFrance recalls one of the Tualatin scripts, on the topic of interethnic relationships and peer pressure. A group of kids breaks into a fistfight after "someone mumbles something about being involved with a 'beaner,'" she said.

To a teen, it might make sense to avenge a racist insult with violence — but after seeing the fight and its consequences again and again, students might think of better ways to stop racist comments.

Acting out these scenes can also give students an appreciation for the complexities of class, gender and race that emerge in interpersonal conflicts. In playing an angry cafeteria worker charged with enforcing rules on unruly teens, students might begin to understand the pressures the lunchroom worker faces.

"Those cafeteria workers don't have a lot of power, yet to students on free lunch they are very powerful," she said. "They have their own rules and guidelines they have to follow. We talked about that: Are the cafeteria workers really the same as the principal? You can have several layers of all of these characters. There are multiple layers of oppression and [the] oppressed."

The audience for your high school play doesn't have to leap onto the stage in order to get involved in social justice. To Susan Myer Silton, founder of Pisces Moon Theater Company in Santa Cruz, Calif., doing social justice theater means choosing edgy, issue-oriented plays — and drawing on perspectives from the community.

"When we do plays with our youth company, we bring in people to educate us," Silton said.

When Pisces Moon was preparing to stage an American classic about racism, To Kill a Mockingbird, she brought in a prominent African American community leader to discuss black issues, "for kids who really hadn’t known a lot of this stuff."

When it was And Then They Came For Me, a play about Anne Frank, Silton's speakers were a local rabbi and relatives of Holocaust victims. And when it was Dead Man Walking, Silton worked with a local high school to develop a broad interdisciplinary look at capital punishment.

"They went all across the curriculum," she said. There were courses in the history of the death penalty, writing, political activism, and forensic science — even political cartooning and art, which led to the creation of marketing materials for the play.

"The theater lobby was all student art and poetry," said Silton. "And the students built the set — [they] welded it from steel. We engaged their whole creative minds, all their talents." 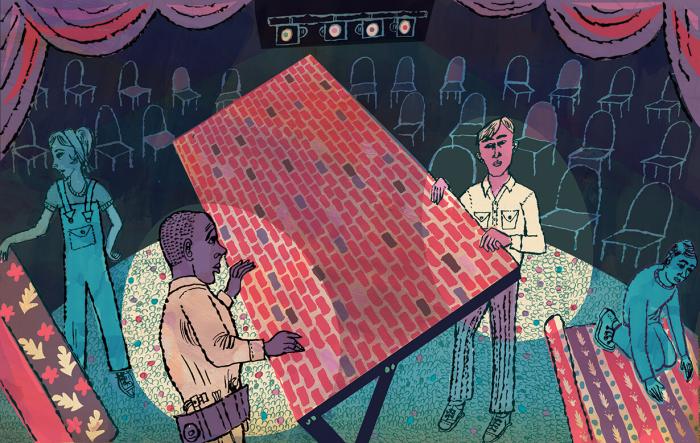 The trick, of course, is getting support for such a production in the first place.

"Nobody wants to be controversial," said Silton. "They all want to feel good about their kids playing pirates."

Just ask Jennie Brown. In 2007, the Sherwood (Ore.) Middle School drama teacher was embroiled in controversy after her original play about bullying, Higher Ground, was banned from the school because of mature themes and language. Administrators eventually agreed to allow the play if Brown toned down the language, but by then word was out and offers were pouring in from alternative venues.

Brown let her students decide. They took her play, in its original form, to the Portland Center for the Performing Arts for three sellout shows.

"The way it all worked out was amazing and gratifying," Brown said. "It was worth the mess. If people don't push the boundaries, the boundaries never change."

Still, Brown ultimately resigned her position at Sherwood Middle School in the wake of controversy about the play.

To avoid crashing into an administrative wall, Brown recommends doing careful homework ahead of time. Assume your administration has little idea what you're doing, and decide whether or not to call attention to yourself.

"Administrators hate to be caught off guard," she said. "Mine were. If you want to circumvent a nasty surprise, tell them what you're doing. And be prepared for somebody to say no."

Most of all, Brown recommends forging alliances with "people who will be supportive and loud — parents in particular, because parents have a lot of power."

Allies were the key in Tualatin. At first the Hay Problemas project was undertaken relatively quietly — until a school diversity committee championed it.

"The fact that we were addressing an issue that no one could deny — the rapid increase in the Latino immigrant student population and its effect on inter-student relationships — was helpful," LaFrance said. "[You should] find a group on campus that will back you up, address topics that have already been identified as pertinent issues … and do a good job."

Teachers should be careful about accepting compromises. As Michael Rohd notes, many school districts snuff out social justice theater by imposing tight controls on the content that can be taught.

"You can't do true Forum Theater, for instance, in an abstinence-only curriculum," he said. "If you have a prescribed outcome — if the spect-actors have to make a choice that supports one message and one message only — you aren't really creating a forum for conversation."

'Kids Come Out in My Class'

Astounding and delightful things happen in drama programs where social justice is the focus.

"Kids do come out in my class," said Jan Mandell, of the Central Touring Theater in Minneapolis.

Central Touring Theater is a troupe, composed of high school juniors and seniors, that presents original plays on racism, sexism, homophobia and other issues throughout the Twin Cities and all over the Midwest. The group's issue-oriented focus attracts a diverse range of students, and Mandell spends the first three to six weeks of every production in community-building activities. Actors are able to open up about things they've never discussed at school.

That group solidarity doesn't have to be limited to a small clique of "drama kids." According to Michael Rohd, one of the benefits of Boal-based theater is that it attracts an often unpredictable range of participants.

"Traditional theater people are sometimes turned off by Boal work," Rohd said. "But you'll often find that it attracts kids who are drawn to social change, peer education or forensics (debate)."

"It's not easy theater," said director Jeannie LaFrance, "but it's awesome."