Her lessons met the standards, but her students were pummeling each other in the restroom between classes. How one teacher found a way to reach the benchmarks that really matter.
Lisa Weinbaum
Issue 35, Spring 2009
Bookmarked 4 times
Illustration by Christina Ung
Add to a Learning Plan
X
Add to an Existing Learning Plan
START A NEW LEARNING PLAN
All articles from this issue
Print

When I overheard my colleagues one day discussing teachers who don't follow state mandates — singing the benefits of enforced curriculum mapping to ensure every teacher is on the same page, teaching the same topic, at the same time — I didn't know they were talking about me. It wasn't until a colleague later cautioned that I was not teaching the state standards and benchmarks that I realized I was the cause for their concern.

I'll admit that my literature students probably don't read what typical seventh-graders read, assuming there is such a thing as a "typical" seventh-grader.

We read about racial violence through Dudley Randall's poem, "The Ballad of Birmingham," written in response to the 1963 bombing that cut short the lives of four girls at the 16th Street Baptist Church. Through Billie Holiday's haunting rendition of a lynching in "Strange Fruit," we witness whites seizing souvenirs from black bodies swinging from trees, like crows snatching shiny trinkets for their nests. And we discover the dangers of homophobia in Warren J. Blumenfeld's "Let Live and Let Love Defeat Hate," an homage to 15-year-old Lawrence King, shot in the head while in his computer class at school. His crime? Being gay.

To be sure, I've memorized a multitude of New Mexico Language Arts Benchmarks. I understand it's not enough for a teacher simply to say, "I read an early lyrical poem by William Butler Yeats with my third-graders and discovered that they loved it." To quote Jonathan Kozol:
[Teachers] can't just let children enjoy literature. They've got to manipulate it in some way. "I used William Butler Yeats to deliver English Language skill 265B…"
(from Shame of a Nation).

And so I do teach to the standards. Still, in my class, we delve into material that matters. Students often bring me pieces they've written, not for homework that was assigned, but because they want to write, and because they have something to contribute. And not only do they expect me to listen, they expect their classmates to listen as well.

I found myself, outside on a boiling and sweaty day, preoccupied by a cool, icy popsicle. The death of my Aunt Diane, killed by cancer, had weighed down my thoughts. The only cooling of my body was the popsicle. I was hot, and as a fire was raging inside, I could see no reason for my body not to collapse, riddled with questions and remarks. The words imprinted on my forehead were of what I had been called all day. Apparently it said, "Hello, I'm gay." "I'm a fag!" my shirt read, "Please make fun of me!" As if the normal "Kick Me!" signs on our backs weren't enough.
- from The Popsicle, by R.B.

My students did listen. As a result, many vowed they would stop calling others "gay," "fag" and other slurs used in schools across the country. 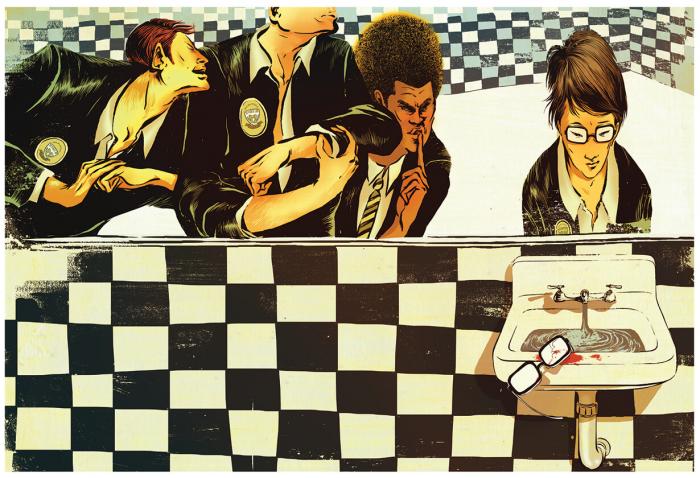 In our school, bullying doesn't consist of verbal abuse alone. For many, girls and boys alike, a favorite pastime was "playing 21" in the restrooms. Encouraged by their peers, two children, often not equal in size or skill, would square off, then proceed to beat each other to a pulp, presumably for 21 seconds — although no one bothered carrying a stopwatch. After all, that annoying detail would only shorten the show.

Yet these bathroom brawls were no game. In early spring, while playing 21 in the restroom, a seventh-grade girl fell and hit her head on the sink. Most of her supposed friends left her on the floor, writhing from seizures caused by the blow to her skull. Two of the braver girls stayed behind. One of them dislodged the victim's tongue from her throat as she began choking. An ambulance arrived. Thankfully the victim fully recovered, but not before her fever spiked to 107 degrees.

I could not, in good conscience, continue my lessons as if nothing had happened. True, the perpetrators were suspended. Rules were broken; consequences were paid. But this was not an isolated incident. It was a common practice, a contest they engaged in for bragging rights at lunch. The winner received respect; the loser, public humiliation.

In class, I asked my seventh-graders, "How many of you have ever participated in 21?" Approximately one-third raised their hands. When they saw my horror at their indifference to brutality, they protested, "But we're still friends! It doesn't mean anything! How can you judge us when you don't know what we're going through?"

It was a fair question, but this wasn't about passing judgment. It was about keeping children safe. I could not allow this cruelty to continue.

So I revived Shirley Jackson's classic story, "The Lottery," a ghastly tale of a small-town ritual held annually where all residents — men, women, the elderly and children — stone a member of their own community to death. The victim might be one's own mother; the murderers might be one's own family members. It's our tradition, the townspeople claim, the way things have always been.

We then watched the NBC television movie, The Lottery, an updated version of the original tale with a modern-day twist. I froze the scene just as the daughter began heaving a stone at her mother, her face contorted with hate.

"These people are twisted!" the students protested.

"How could they do such a thing, to their friends, to their loved ones?"

Sickened by the scene, they demanded to know if towns still continue this practice.

I quietly responded, that, yes, this practice continues to this day. In fact, it occurs right here in New Mexico, right here within our school.

The students wrote in response to the story. Compiling their reactions, I asked those who had participated most recently in 21 for permission to include their names. They willingly agreed, recognizing their power to transform themselves and help their peers end the assaults within our school. Acknowledging their own culpability, the students turned in self-reflections that amazed me. They read their words aloud in class, sometimes followed by spontaneous bursts of applause:

I think that just as those in the story are brainwashed, so are we. The townspeople that do this lottery see no harm for what it is, and it is murder. I can see what these townspeople are doing is wrong and crazy. Then again, we aren’t angels ourselves. They can see what I do is wrong and crazy, even though to me it is how I live. Just as they close their eyes to not see the wrong in what they are doing, I do the same. We are all brainwashed in our own ways. — Z.G.

Our school and The Lottery aren't much different. Like 21 at school, you may not throw stones, but you throw punches that are stones, just like The Lottery. When you see friends fight, it not only hurts them, but you. It can kill you, doing this 21, but I don't mean physically, I mean emotionally, mentally. I admit I have watched friends fight and did NOTHING. — G.S.

It is amazing how people can turn against people that they love. The people in the story are blinded. They don't or they can't or they just choose not to actually see what they are doing to other people. Honestly, I've been in a fight before and now people ask me if I regret it. And I always say, "No. I don't regret it." What I like to say is there are no regrets in life, just lessons. I don't regret what I did but I've learned my lesson. I don't want to do it ever again because then I, or whoever is fighting, is turning into that angry mob. When people fight it's like we are the angry mob because we're watching and we're not doing anything about it. — S.B.

For the rest of the school year, traditionally a time when disruptive behavior escalates, our seventh-graders ceased the bathroom brawls. Some might say it was merely coincidental. I know my students would disagree.

Some may be unsettled by what we read in class, but as a principal once stated when discussing the Holocaust, "turning ours heads from it doesn't make it go away." And so I won't turn my students away from stories that matter. And I won't allow students to turn away from each other, either. Educators can teach to mandated standards and benchmarks and still teach the ultimate standard, one of human dignity.