Your Students Love Social Media ... and So Can You

Last spring, a New Jersey middle school principal saw a rise in bullying at his school. Students were spreading rumors and gossip online, hiding behind anonymous screen names and profiles. What was worse, the principal said, his school’s guidance counselor was spending the majority of her day dealing with the emotional fallout.

The principal had had enough. He emailed a letter to parents, asking them to forbid their children from participating on any social networking sites. Experts say the principal’s frustration was understandable—but his solution was simply not practical.

A recent Pew Research Center report shows that 73 percent of teens between the ages of 12 and 17 use social networking, up from 55 percent just four years ago. Numbers are greatest among high school girls, who tend to use social media as a way to socialize and strengthen relationships.

Facebook and, to a lesser degree, MySpace are the major social networking sites of choice. But teens also use social media when they text on cell phones, play online games and interact with others through online forums and membership sites. In the last five years, social networking has become ubiquitous.

Some of the concern about social media is warranted. Parents should be more knowledgeable about their children’s online activity, and cyberbullying can be painfully vicious.

But others say social media is here to stay, and rather than shielding children from it and admonishing them for using it, educators should support these social networks.

Pam Rutledge, a psychologist and director of the Media Psychology Resource Center, says adult fear of new technology is not new. There were similar concerns when television was introduced.

“From my perspective, this new technology is all a very positive thing. Social media has totally changed the communication model,” Rutledge says. “This is so empowering.”

That’s especially true for teens in their search for affirmation. Teens still engage in traditional behaviors, like talking on the phone for hours and trolling the mall with their friends. But Rutledge says social media provides a new way for them to construct their identities.

“It’s fundamental for teens to want to feel empowered, to have a sense of individual agency, a willingness to learn, to produce,” she says. “To spend all their time making their Facebook page cute allows them to exercise control over their domain and their identity.”

Social media researcher Danah Boyd is a fellow at Harvard’s Berkman Center for Internet and Society and author of “Why Youth (Heart) Social Network Sites: The Role of Networked Publics in Teenage Social Life.” She says social networking has become part of social learning. In these contexts, teens learn how status in a social group works and how information flows through a community—skills they will need in adult life.

However, while teens can hone their social skills online, technical skills vary according to household income. There is “an unfortunate assumption that since they’re young and they grew up with it, they know how to use it,” says Eszter Hargittai, an associate communications and sociology professor at Northwestern University. “We do them a disservice by going into the classroom and assuming they are already digitally savvy.”

In studying the next generation of Internet users, Hargittai found that “students who come from families with lower economic status and less  education know the Internet less than those with a privileged background, therefore they are less likely to reap the benefits.”

Differences in how students use social media are manifest in other ways, but all agree that existing social boundaries translate online. Most teens are networking with peers they already know—kids a lot like themselves. 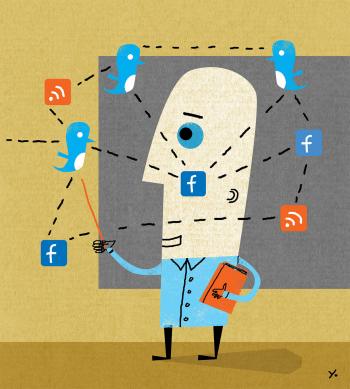 Rutledge understands parent fears about privacy, cyberbullying and online safety, but she also understands teenage behavior and the significance of social networks.

“People connect—that’s what we do,” says Rutledge. “That’s a biological function, not an aberration. The desire to grow up and do these adult things overrides caution. It’s not pathological. It’s normal teen behavior.”

A Healthy Dose of Social Media

Sometimes it’s hard for parents and educators to understand what healthy online behavior is. Social media can provide an opportunity for teens and adults to gain media literacy.

“I think it is incumbent upon schools to teach smart digital citizenship,” says Christopher Lehmann, principal of Science Leadership Academy (SLA), a 6-year-old Philadelphia charter school. “One way to model digital citizenship is to be there [online] and let yourself be seen as part of that world. It also helps them navigate that space.”

Lehmann’s embrace of technology led to him being named one of the “30 most influential people in EdTech” by Technology and Learning magazine. Lehmann is a frequent blogger and maintains a Facebook and Twitter presence. (He only “friends” students who “friend” him first.)

Part of SLA’s social media strategy is parent education. Lehmann says the response he receives from parents runs the gamut. “Some are unbelievably fearful, others are fully invested in it.

“Social media is part of kids’ lives,” he adds. “Either we acknowledge it exists and allow ourselves to be part of the conversation, or it’s one more way school becomes irrelevant to kids. Any tool is a weapon if you hold it right.”

Lehmann believes “being online in 2011 is part of living a healthy life. Let kids see us use it in a healthy way.”

Social media is part of kids' lives. Either we acknowledge it exists and allow ourselves to be part of the conversation, or it's one more way school becomes irrelevant to kids. Any tool is a weapon if you hold it right.

Some researchers are finding that social media in the classroom can have positive psychological effects.

Erica Robles, an assistant professor of media and communication at New York University discovered that when students were asked to answer questions using Twitter, they felt less pressure, even if the answer was incorrect.

“Social media allows teachers to manage social anxiety and create a safe learning environment where everybody learns,” says Robles. “We have only just begun to scratch the surface on the architectural design of the classroom, or the physical layout of information. We’re learning that you can go beyond the curriculum to communicate the same content across laptops. It might not be the best place to show collaboration, but it gives students control. Small choices can have implications psychologically.”

David Bill, a former middle school teacher, used social media as a teaching tool in his classroom to help students “learn from experts around the globe as well as teachers down the hall.

“I wanted them to see how it could extend and simplify their learning,” says Bill, who is now the online community manager for New Tech Network, an organization that helps create project-based learning schools. “I think it is important for educators to understand our students and try to meet them halfway. To ignore how our students learn and operate would only push them away from enjoying the process of learning.”

Rutledge encourages adults to ask teens about their online interests. If a student is absorbed by online gaming, play with her. If another is glued to Facebook, ask him about the attraction without being judgmental.

“I have a nephew who, in high school, was painfully shy,” says Rutledge. “He told me the reason he liked Facebook was because he liked to think before responding immediately. He found he could cultivate friendships that were much deeper.”

“They are still forming their sense of self, so they are not very secure. They are still experimenting with who they are. They get defensive because they are just trying to build their identity and may not yet be where you want them to be,” explains Rutledge. “What you don’t want is for them to firm up that boundary while they are still fluid. If you attack them you slow that process down and get them to defend something when they are still in transition.”

Lehmann discovered that when students are trusted, they monitored themselves and learned from each other naturally. Not long ago, someone at Science Learning Academy started a slam page deriding the school on Facebook.

“The kids took it upon themselves to make sure it went away,” Lehmann says.

Then, he says, they started another one asking visitors to finish the sentence, “You know you go to SLA when …”

“The students were posting all these silly, ridiculous, weird things that celebrate our community,” says Lehmann. “It was really cool. The incident showed that when kids didn’t like the way something happened they felt empowered to reverse it.”