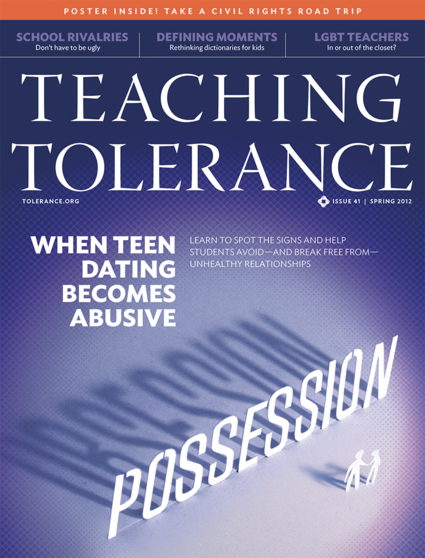 As an activist, you know you’re getting somewhere when Barack Obama wants to see you in his office.

In March 2011, Jaim Foster was sitting on a sofa in the White House, watching the president lean forward in his chair, listening intently. Foster was part of a small group the president and first lady Michelle Obama had invited. The Arlington, Va., teacher was there with a parent and three students to talk about bullying.

“I said that as a gay male, I had been bullied and gone through some traumatic times myself,” says Foster, who is secretary of the National Education Association’s Gay, Lesbian, Bisexual and Transgender Caucus. “And that has led me to become an advocate.”

And, anecdotally at least, more LGBT teachers are becoming leaders like Foster. But the comfort levels of these educators can vary sharply from region to region and even from school to school. In conversations with LGBT educators across the nation, it is clear that many still face bigotry and difficulty. But there are also many heartening stories of acceptance, respect and leadership.

“I think over the last 20 years, there’s been so much more of an understanding that gay people are not these monsters,” says C. Scott Miller, a second-grade teacher in Santa Ana, Calif. “People will ask you what you did on the weekend, and did you see this movie or that movie. People are far more aware that these relationships are just as normal as anyone else’s.”

Those teachers who speak of greater acceptance within their schools emphasize a culture in which students and colleagues focus more on the individual than on any label or stereotype.

“A lot more families that I come in contact with know someone who’s gay, whether it’s a sibling or whatever,” says Felix Gil, an elementary school principal in Summit, N.J. “It’s not like you’re the only gay person they know. They have a reference or a contact for that experience.” Gil says this allows him and his school community to “focus on the work.”

This cultural shift has also turned some LGBT educators into resources and sounding boards. Administrators, teachers and parents alike come to LGBT teachers with questions regarding the sexual orientation of students or family members. Miller, for instance, has a colleague whose daughter recently came out to her. “She said, ‘Because I know you, it was easier for me to talk to my daughter,’” Miller recalls.

Of course, LGBT teachers also can provide increased awareness and support for the primary focus of their work: the students. “I think it’s important for all kids to have LGBT teachers,” says Erika Sass, an elementary school technology and literacy teacher in Minneapolis. “For straight kids to see that Miss Erika is not creepy and scary and mean, maybe they won’t think that being gay is weird. And it’s especially important for queer kids to have a positive queer adult. When I was a youth, I was desperately looking for a queer adult who was healthy and living a normal life, to verify that I can live a normal life and be OK.” 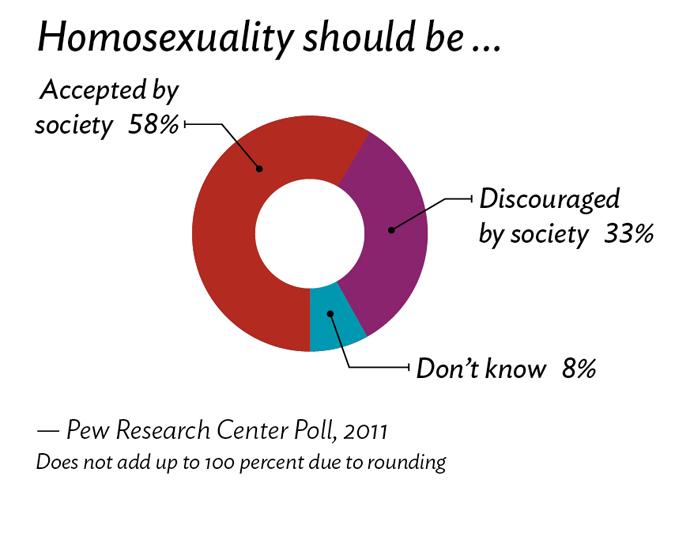 Frank Burger, a high school biology teacher in Flint, Mich., has worked with LGBT students as co-adviser of his school’s Gay-Straight Alliance. “If a gay student sees a gay teacher, they see someone who looks like them or acts like them,” Burger says. “And they feel safer and more supported in the classroom.”

So does that mean every LGBT teacher should be out at this point? Despite Foster’s invitation to the Oval Office, there is still no federal anti-discrimination law covering sexual orientation or gender identity. On the state and local levels, the kind of protection afforded to LGBT workers depends on where a person lives and how the laws are written. There are 19 states with no anti-discrimination laws protecting LGBT workers. Sixteen others offer partial protection, meaning that only public workers or sexual orientation are covered.

Bridget Valenzuela teaches science at Salt River High School on the Salt River Pima-Maricopa Reservation outside Phoenix. While Arizona law does prohibit discrimination based on sexual orientation in public employment, Valenzuela says it’s much different teaching there than in areas such as San Francisco or Chicago.

“It’s kind of like you’re under cloak-and-dagger,” says Valenzuela, who has been teaching for seven years. “It takes a lot longer for things to progress and make strides. It feels like things are moving at a snail’s pace. When I first started teaching, I said, ‘There’s no way I’m ever going to be out.’ Coming from a job where I was out, it was like being in the closet all over again.”

Rep. Patricia Todd is a state legislator in Alabama, one of those states without any protection for LGBT workers. She introduced a bill in May 2011 designed to protect LGBT teachers from being fired because of sexual orientation or gender identity. No action was taken on the bill, but Todd, who has been out as a lesbian for three decades, says she plans to introduce the bill again this year and, if necessary, in 2013 as well. She describes the attitude toward LGBT teachers in her state as “hostile” and says she would not come out if she were a teacher.

“I have a friend who was fired from her school specifically because she came out,” says Todd, a Democrat from Birmingham. “I just think this is absurd that we would fire a teacher not on merit, but based on stereotype and misperception. We should encourage teachers to live their lives openly.”

Burger, who serves as male co-chair of the NEA’s GLBT Caucus, says he worries that as tenure laws are relaxed in some states, LGBT teachers could be targeted further. Burger wears an “Out and Proud” bracelet to his school in Flint, Mich., every day, and believes that every teacher has the right to live openly and honestly. But he is concerned for the LGBT teacher who is thinking about coming out now. 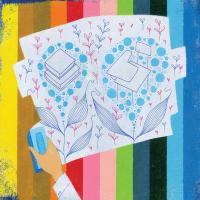 “I think you just need to be careful about how you do it,” Burger says. “You need to know the laws of your state. It’s not one of those things where you just go into a class and say, ‘I’m gay.’ You don’t do that. I’m not saying you’ve got to hide in the closet, but you do need to watch what you do.”

a.  The assumption that everyone is attracted to the opposite sex.

b.  The idea that male-female attraction is superior to same- sex attraction.

c.  The belief that being heterosexual is better than being lesbian, gay or bisexual.

d. All of the above.

Watching what you do is a common theme in conversations among LGBT teachers, even those whose states offer anti-discrimination protection. After all, it doesn’t take much to stir up controversy if certain elements come together. A few years ago, a parent complained about the photo on Burger’s desk of him and the man who is now his husband. The parent alleged that the photo was intended to elicit conversation with students and promote homosexuality.

Complaints such as these can lead LGBT teachers to fret over their curricula as well. When Sass was teaching at a Los Angeles high school before moving to Minnesota, she found herself feeling anxious over a PowerPoint slide she had prepared about Bayard Rustin, the civil rights leader who also happened to be gay. “That’s one of the challenges of being an LGBT teacher—making sure you’re not being seen as pushing your personal agenda,” she says.

Emmy Howe co-directs the National Seeking Educational Equity and Diversity (SEED) Project on Inclusive Curriculum, an international staff-development project designed to bring teachers together to discuss fairness and equity in school climates and curricula. In her years as an LGBT educator in her home state of Massachusetts and throughout the nation, Howe has noticed that opposition to LGBT teachers tends to increase just as gains in acceptance are experienced elsewhere. This happened in Massachusetts, she says, after same-sex marriage was legalized in 2003.

“Once a group gets a little power, people maybe become a little more afraid,” Howe says. “The fact that marriage was legitimate made the people who were politically against having out teachers become more adamant and active.”

The impact of these political actions and reactions can send ripples throughout the country. A New Jersey high school world languages teacher, who has taught for more than 20 years, considered coming out for this story. But in the end, he felt that too much was at stake. “Politically, under this climate—it’s so toxic—I think everybody is operating from fear,” the teacher says.

Yet even without ever coming out, that same teacher has encountered students and parents in his district who view him as a valuable resource beyond his teaching expertise.

“I have noticed increasingly over my career that I attract students to me who are grappling with LGBT issues and confide in me, even though I never have put myself forward as someone to confide in,” the teacher says. “I think that there are families over my career who have put their children in my program because they wanted them to have me—not because of the language I teach. They might have noticed in their children some confusion about identity and thought that this would be a safe place for them.”

Sass, whose home state of Minnesota has seen very public debates over sexual orientation in recent months, works in a charter school that offers her a lot of support. She is grateful for her situation yet saddened to know that some teachers feel the need to play it safe by not coming out. This, Sass says, is a societal challenge.

Even those LGBT educators who’ve had a seat with the president know it’s not easy for everyone. “If they don’t feel safe, they should not come out,” Foster says of his colleagues. “I do believe in the saying ‘Be the change that you want to see in the world.’ But it’s tough. It’s tough. We still have a long way to go.”

Gil applied for a principal position in his current district because he knew the administration there valued diversity. In thinking carefully about where he works, Gil has allowed himself to lead others while also being honest, open and comfortable with his identity. As the messy path toward progress continues, perhaps this is the final goal of the LGBT teacher.

“Ultimately, you will find a place that appreciates you,” Gil says. “And that will be the place where you can have the greatest impact. You may not be there now, but if you look for that place, you will find it.”

LGBT educators enjoy more openness and acceptance than ever before. But their gains have been fragile and uneven. And many still feel it’s safest to teach from the closet.
x