Weighing In - Healthy at Any Size?

As the number of obese and overweight children grows, so does size bias.
Camille Jackson
Issue 41, Spring 2012
Bookmarked 2 times
Illustration by George Bates
Add to a Learning Plan
X
Add to an Existing Learning Plan
START A NEW LEARNING PLAN
All articles from this issue
Print

Celebrities like singer Jennifer Hudson and actress Kirstie Alley parade their drastic weight loss in commercials and magazine articles. Popular TV shows like The Biggest Loser promote fast, extreme weight loss. And fat jokes cut across race, ethnicity and gender lines to provide easy laughs for comedians at the expense of the heavyset. 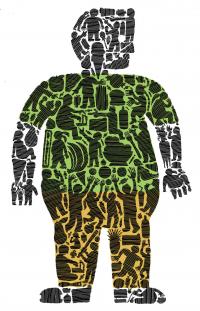 Society is more fatphobic than ever before, with subtle and overt messages all around us that not only is fat bad, but so are fat people. It’s easy for overweight children to feel singled out and shamed about their body size, at home and at school. Experts say children can easily interpret even the well-intentioned “war on childhood obesity,” meant to promote health, to mean a war on their bodies and on them.

“The number of obese kids has increased, so negativity has increased,” says Reginald Washington, the chief medical officer at Rocky Mountain Hospital for Children and a leader in the fight against childhood obesity. “It is true that if you are obese you are discriminated against in schools and the workplace, and even in your home. Physical education teachers see them as lazy and are harder on them in class. Studies have shown this.”

Size-based stigma stems in large part from the myth that being fat is a result of a lack of self-control and willpower, says Rebecca Puhl, a psychologist and coordinator at Yale’s Rudd Center for Food Policy and Obesity. “There are prevailing public perceptions about the causes of obesity, like the widespread belief that obesity is simply an issue of laziness,” Puhl says. “This perception drastically oversimplifies the complex causes—societal and biological—of obesity.”

Lamar Richardson (not his real name), 25, of Greenville, N.C., remembers being humiliated in his sixth-grade physical education class when the coach jokingly suggested he wear a training bra. Richardson can still hear the laughter of his classmates.

“It affected me for a very long time,” says Richardson. “I was not comfortable with my body image. Even when I got to high school, after football practice I would go straight home and shower, rather than go to the locker room.” He is now in a fitness program at a local gym but says he “still has the same issues.”

Megan Hansen, the founder of a healthy-lifestyle support group in North Carolina, also isolated herself in high school because of her weight: “When you’re fat you walk with your head down,” she says. “You go from class to class not wanting anybody to see you.” Megan says she was careful not to stand next to cheerleaders, for fear of being compared with them.

Lavinia Rodriguez, a clinical psychologist in Land O’ Lakes, Fla., who treats eating disorders and weight issues, says most of the size-discrimination stories she’s heard have come from adult patients. “Younger kids don’t want to talk about that,” she says. “They don’t bring it up. The things they talk about suggest [size bullying], but they don’t state it overtly.” Richardson agrees: “I didn’t talk to anybody about it,” he says. “As a guy you’re taught not to really share your feelings like that. You just suck it up.”

Rodriguez points out that girls are more likely to talk about their body-image issues and self-esteem than boys. “Girls tend to remember name-calling and boys remember getting beat up,” she says.

Unfortunately, educators often promote the negative stereotypes overweight students face. Studies show teachers tend to call on lean children over obese students. Some are less likely to give a favorable grade to overweight kids, and they generally perceive these children to be less successful. According to the Obesity Action Coalition, teachers often view overweight students as untidy and more emotional, among other problems. Obese students are also less likely to be accepted to college, despite having equivalent application rates and academic achievement.

State efforts regarding size bias in schools have thus far focused on reducing weight, not reducing prejudice. For instance, in 2003 Arkansas became the first state to record students’ body mass index (BMI) and send the results home in a report card. However, federal agencies, including the Centers for Disease Control and Prevention, have not found enough evidence to recommend such programs as an effective strategy against childhood obesity.

The Arkansas program had no effect on obesity levels, according to a 2010 report by the state’s Center for Health Improvement. And experts disparaged Arkansas’s program coverage: “They didn’t go the next step to give parents tools on how to design better meals and find afterschool activities,” says Washington of the Rocky Mountain Hospital.

Yet Pennsylvania, New York, Massachusetts and other states soon followed with similar BMI-measuring programs. Georgia started a statewide school fitness program, the Georgia Student Health and Physical Education initiative, which seems to approach the issue in a more constructive way. In Georgia, kids are not labeled by their weight, says Therese McGuire of Georgia’s Department of Education. Rather, “some kids will learn they are not in the healthy zone. It just means they need to make positive changes.” Teachers will receive the students’ data in aggregate form, she says, so that schools can customize their curriculum, for example by starting a running club.

Am I biased about size?

Children should be legally protected from size-based teasing and harassment in school, says the National Association to Advance Fat Acceptance (NAAFA). The organization has called for changes in the proposed Safe Schools Improvement Act to add weight, height and physical appearance as protected categories, alongside race, religion and sexual orientation.

“Discrimination continues to increase against people of all ages,” Howell told a room full of reporters. One in six children are bullied, she said, and of those, 85 percent are bullied for their size or physical appearance. And Howell argues that programs such as first lady Michelle Obama’s “Let’s Move!” campaign, which began in February 2010, do not help matters. NAAFA contends that the campaign, intended to “solve the problem of obesity within a generation,” should focus on the overall health of children rather than on body size alone.

Rocky Mountain Hospital’s Washington disagrees. He points out that obese and overweight children are more likely to have high blood pressure, diabetes, bone issues and other substantial problems. And obesity-related health problems cost states billions of dollars each year. However, Washington does agree with NAAFA that size discrimination is increasing, and says that it is up to adults to be self-reflective about their personal prejudice against overweight people.

“Teachers have to look within themselves to ask, ‘Am I a part of this problem?,’” he says.

What Schools Can Do

Schools can avoid perpetuating size-based stigma by de-emphasizing weight and BMI numbers and focusing on overall health for all children. Psychologist Rodriguez says attention needs to be paid to behaviors, not to numbers.

“Don’t focus on one child as the one who has to do something different,” she said. “It should be a family or school project. Parents are so focused on size, the weight, the number, they look at the symptom and just want to make the child lose weight.”

Rebecca Puhl at Yale’s Rudd Center says that teachers must be more aware of their own attitudes toward overweight and obese children. Those attitudes affect the overweight children directly and can indirectly promote bullying by other students. “Essentially, weight bias is rarely challenged, and often ignored,” she says. “As a result many youth who are struggling with their weight are vulnerable.”

Portfolio Activity for “Weighing In”

As the number of obese and overweight children grows, so does size bias.
Bookmark This PageSave