Nikole Hannah-Jones is an award-winning investigative reporter and staff writer for The New York Times Magazine. She is also a major voice covering racial segregation in U.S. schools and the lived experiences of students of color. Hannah-Jones spoke with Teaching Tolerance about the barriers to equitable, integrated schools and classrooms and why we must find ways to overcome them.

How did you start writing about school segregation?

The only reason I ever wanted to be a journalist was to write about race and racism. That’s what inspired me to want to write. That’s what inspired me to want to chronicle the stories of people who looked like me in communities that I grew up in. I think that’s why I always loved history and journalism even as a child; I would look around and just see how differently people who lived in black communities lived compared to people who lived in white communities. I really wanted to understand why that was.

My very first job out of grad school was to cover a majority-black, heavily segregated school district in Durham, North Carolina. For me, just the only way to cover that school district was to be writing about school segregation and the impact. This would have been about 2003, so right after No Child Left Behind gets passed and you’re starting to see the results of this decision to engage in high-stakes testing and to say, “We’re not going to try to break up poverty and racial isolation. We’re just going to hold these poor black schools to very high standards. We’re going to hold them to the same standards as white, middle-class schools.” … You’re hearing about turnaround schools and you’re seeing principals and staff being removed at these high-poverty schools, and I’m a beat reporter who’s spending a lot of time in these schools and really seeing the futility of it all. That’s how I started writing about segregation.

How does racial segregation create and uphold school-based inequalities, specifically along racial lines?

Clearly from the founding of this country and from the founding of public education in this country, both of them were built on a racial caste system that put black citizens on the bottom. And so when we look at data, we know there’s never been a single point in the history of this country where black students in black schools have received the same educational opportunities. … That’s why integration is so critical because that has been the only way that we have been able to ensure equal educational opportunities. …

At this point, I think we need to understand [that] when … half of all schoolchildren are black and Latino and very soon half of all children born in this country will not be white, if you marginalize those students and keep half of your population from receiving a quality education, that’s going to hurt everyone. It’s not just going to hurt black and brown kids anymore, because you are keeping half of your population from being able to go on and get the education to be the leaders in our society, to come up with the next new innovation, to be the lawyers or the doctors, or the schoolteachers or the professors.

What arguments against school integration do you hear when you’re talking to parents, families and educators in the field?

I think the argument that you hear from black parents is that integration always came on the backs of black children and that it was black children who had to leave their neighborhoods. It was black schools that have been closed down, black teachers and principals [who] were laid off, and at this point, that the burdens have been too high and not enough payoff. I think those are the arguments that you hear from black parents: … integration has never been equally borne, and an unwillingness to keep chasing white families who don’t want their children around their kids. 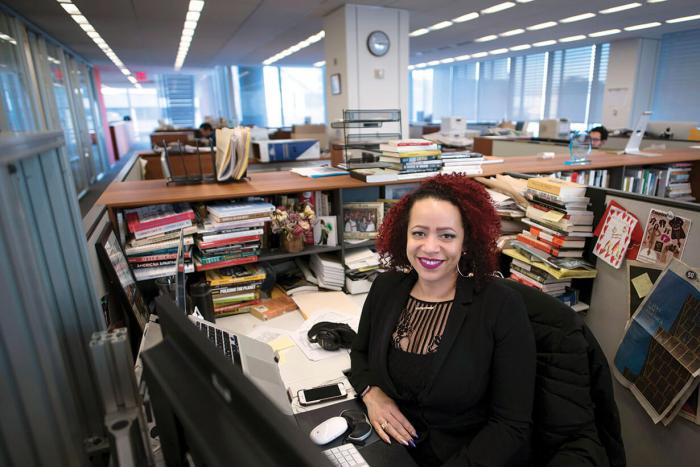 In your reporting, you often focus on the lived experiences of black students who attend or have attended segregated schools. What common themes and topics do they raise?

I think the most common thing—and the most devastating thing—is they understand why they’re in segregated schools. They understand that society as a whole does not value them. … They also know that they are not receiving the same education that their peers in white schools are. They understand that link between race and resources very clearly. … [T]hey’ll say, “They don’t think we’re good enough.” “They don’t think we’re as smart as them.” “They don’t want their kids around us.” “We don’t get the same things that they get.” This is the thing that we as adults want to pretend: one, that these things aren’t true, and two, that somehow kids aren’t smart enough to understand that. But they absolutely are.

What do you see as the biggest barriers to achieving school integration?

The biggest barrier is lack of will. I think what I try to show in my work is, again, you always hear that it’s too hard. Segregation was not easy to create. There was a lot of effort that went into creating segregated schools and neighborhoods and a lot of resources from the federal government, down to the local government, down to the private citizen. But we were willing to do that because all of those resources were being put toward benefiting white students and white families. We are unwilling to put those same resources to making the system more equal, so I think … the biggest barrier is a lack of will, and there’s still a lot of racism and discrimination that we have to overcome.

There’s been research and studies that show that white parents say that they want integrated schools or say that the only thing that matters about schools is test scores, but when they’re actually making the selections, the racial makeup of the school, particularly how black a school is, plays a larger role than the test scores or the reputation of the school. I think that is probably the most difficult thing to overcome: … the fear that white parents have of large numbers of black children and the belief that the more black students you have in a school, the less safe that school is and that those students are not, as a whole, as smart or dedicated as their own children.

Desegregation and Integration Aren’t the Same

“Desegregation is largely what happened in many communities, which meant you no longer had all-white schools or all-black schools. You would have some level of racial mixing, but it wouldn’t be integrated, meaning it wouldn’t reflect the racial makeup of a town.

“Integration to me means that you have schools that reflect the metropolitan area racially, and where there’s power-sharing in that school and where even the classrooms are racially mixed … [and offer] equal access to the same types of courses and instruction.”

How can educators build awareness around school segregation and take action to bring about change?

I have seen a lot of conversations in the last few years, and I know that my work has spurred a lot of conversations, but conversations aren’t enough. So while adults are talking about the problem, there are children in these classrooms right now who are being deprived of the education that they deserve and who are going to face lifelong consequences for that. The only thing I would say is communities need to decide if this is intolerable, that it is untenable and that it is unjust, and then they need to fix it. It’s not my role as a journalist to say how, and it’s going to be different … in every community, but I think my role as a journalist is to not let us ignore what we’re doing to children.

Is there anything else we haven’t talked about that you want the readers of Teaching Tolerance to know?

The only thing I guess I would add is we don’t do our children a service by pretending that racial injustice does not still exist, that all-black classrooms, all-Latino classrooms, all-white classrooms are not created, and that kids aren’t noticing this and coming to their own conclusions. I think our job as a society and the job of educators is to have these conversations, to give students the language to understand their world and the context to understand their world. But teachers need to have that context in order to do it, and I just don’t think enough teachers place a priority on that.

Check Out These Highlights of Nikole Hannah-Jones’ Recent Work

Choosing a School for My Daughter in a Segregated City

In this article published in The New York Times Magazine, Hannah-Jones chronicles how she and her husband “surrendered their advantage” when they chose to send their daughter to a segregated public school.

The Problem We All Live With: Part One

Hannah-Jones teams up with the radio program This American Life to examine the unintentional desegregation plan of Missouri’s Normandy School District—the district from which Michael Brown graduated.

Coinciding with the 60th anniversary of Brown v. Board of Education, Hannah-Jones reports for ProPublica on the resegregation of city schools in Tuscaloosa, Alabama.