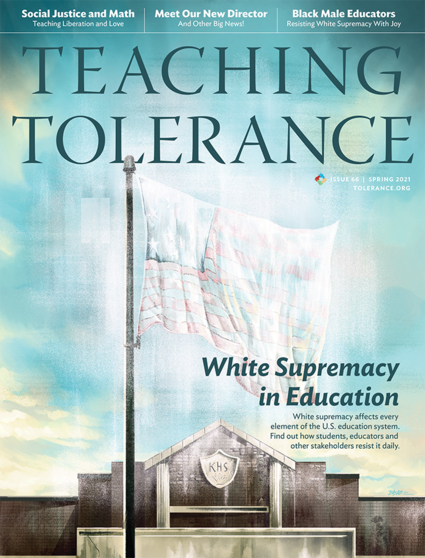 The Learning for Justice Social Justice Standards are the anchor standards and learning outcomes created to guide teachers in curriculum development and make schools more just, equitable and safe. Our standards are designed to be used alongside state and Common Core State Standards in all content areas to reduce prejudice and bias and advocate for collective action.

These standards are divided into four domains: identity, diversity, justice and action. This final entry of a series that began in the Spring 2019 issue of Teaching Tolerance walks through the “action” domain to help you give students the skills to take what they have learned about identity, diversity and justice and apply it by taking action in their communities.

In the feature “We Won’t Wear the Name” in this issue, LFJ Senior Writer Coshandra Dillard tells the stories of students and alumni who took action to change the names of schools honoring Robert E. Lee.

The story explains how the students and recent graduates of these schools acted against an injustice they saw, even though they were at times intimidated or even threatened for using their voices.

When talking about action with students, it’s important to remember that anyone can find a way to take action against injustice—students included. Throughout history, change has happened not because heroes have acted alone but because communities have acted together.

To introduce students to the domain of action, you can adapt our teaching strategy “Say Something.” Put students into pairs and have them take turns answering the following questions:

Each student should have a minute to ask follow-up or clarifying questions. After a few minutes, pairs can share out with the class. To explore examples of action, you can use some readings from our text library. For example, K-5 students can read the story “Gloria and Rosa Make Beautiful Music” about two students who work together to raise money for a school music program. They can consider the following questions:

Students in grades 6-12 can read about a different form of action with the informational text “The First Americans,” a 1927 letter to the mayor of Chicago calling for better teaching of Indigenous history. They can discuss these questions:

Finally, have students discuss the concept of action together. Divide students into groups of three or four and ask each group to brainstorm answers to this question: “What are some of the ways young people have taken action to fight for justice?”

After a few minutes, bring the class back together and have them share ideas that stood out to them. Discuss the following questions:

16. Students will express empathy when people are excluded or mistreated because of their identities and concern when they themselves experience bias.

17. Students will recognize their own responsibility to stand up to exclusion, prejudice and injustice.

18. Students will speak up with courage and respect when they or someone else has been hurt or wronged by bias.

19. Students will make principled decisions about when and how to take a stand against bias and injustice in their everyday lives and will do so despite negative peer or group pressure.

20. Students will plan and carry out collective action against bias and injustice in the world and will evaluate what strategies are most effective.

Next, consider how the action standards show up in the following scenarios.

Marcus has noticed some of his classmates using phrases such as “That’s so gay” or “Don’t be gay” when joking around. He has also noticed that some of his queer friends tend to get quiet or walk away when these classmates are nearby. One day, Marcus finds his classmates after school and asks if he can talk with them. He explains that equating being gay with something shameful demeans people who are LGBTQ and can make them feel uncomfortable or unwelcome. Marcus shares that his dads are gay, and he says very clearly that jokes about gay people aren’t OK. After his classmates apologize, he invites them to their school’s GSA meeting the following week.

Kia is a Deaf sixth grader who wants to join her school’s chess club. But Mr. Blake, the club sponsor, tells her she probably shouldn’t because she “just wouldn’t be able to participate on the same level as the other students.” Kia challenges Mr. Blake by telling him that this is unfair and unjust.

Catherine has been in the chess club ever since she started middle school. Now, as an eighth grader, she is the leader of the club. She witnesses the conversation between Kia and Mr. Blake. After Kia leaves the room, Catherine finds Kia and asks how she can support her. Kia tells Catherine that it’s critical to create safe spaces for all students in their school, regardless of their ability. With Catherine’s help, Kia organizes the other members of the chess club to boycott meetings. The news of the student protest eventually makes it to some parents and guardians, who decide to sponsor a new chess club. They work with the school to ensure that a sign language interpreter is available at all of the club meetings moving forward.

You can incorporate the action standards into your curriculum by writing essential questions for your units of study. You’ll find two examples for different content areas below.

A.19, A.20: How can the work of young people such as Mari Copeny (also known as Little Miss Flint) be used as an example for students taking action in fighting for environmental justice?

Answers will vary. Mari Copeny rose to prominence advocating for safer water in her hometown of Flint, Michigan. She helped bring Flint’s water issue into the national spotlight by writing to then-President Obama. Through her activism, she has raised awareness for other cities across the country impacted by pollution and climate change.

To take action in their own communities, students can test the water purity at their homes or schools or in nearby waterways. They can plan ways to take action, including designing campaigns to write or call elected officials, regulatory bodies and private corporations.

A.16, A.18: How can students analyze data about differences in school budgets and resources to advocate for equity?

Have your students research publicly available data on school budgets. Start with your own school. How much gets spent every year on facilities? Maintenance? Supplies? Technology? Staff? Then, have them compare that data with other schools in your district or city. What is similar? What is different? What inferences could be made about the disparities in budgets? Have your students brainstorm ways to address inequities. You could even share the Spring 2020 article “They Deserve Better,” about students in one underfunded Mississippi high school who organized to rally support for a local bond issue that funded a renovation of their building.

Now you try! Write an essential question based on one of the five action standards for your own grade level or content area.

Our free film Mighty Times: The Children’s March tells the story of how, in 1963, young people in Alabama banded together to protest segregation—and won significant victories.

In the Fall 2020 story “School as Sanctuary,” LFJ Senior Writer Cory Collins highlights educators, school leaders and advocates who pushed to gain stronger protections for immigrant students and their families. The accompanying toolkit provides concrete ways you can take action to support immigrant students and families in your school community.

And “Responding to Hate and Bias in the West,” a story by LFJ Senior Writer Coshandra Dillard published in the Spring 2020 issue, explains how a group of parents and caregivers worked together to fight racism in their children’s Las Vegas school.