The history of the Tulsa Race Massacre was buried for 100 years. Teachers are trying to change that.
Coshandra Dillard
Issue 2, Spring 2022
Bookmarked 3 times
Illustration By Kim Salt
Add to a Learning Plan
X
Add to an Existing Learning Plan
START A NEW LEARNING PLAN
All articles from this issue
Print

When May 31 rolls around each year, people—both from Tulsa, Oklahoma, and elsewhere—often discuss when they first learned about the 1921 Tulsa Race Massacre. Many recall being introduced to that shameful mark in history via word of mouth or from the HBO series Watchmen long after they’d left high school.

Vivian Clark-Adams, Ph.D., who left Tulsa after graduating from high school in 1968, learned about the Tulsa Race Massacre in the 1980s when she returned home. She became angry. She had attended school in Tulsa since the fifth grade. She says she learned Oklahoma history in eighth grade. Yet, she’d heard nothing about what happened in her city in 1921—then called the “Tulsa Race Riot.”

“I came back here to do my doctorate at the University of Tulsa, and they had an exhibit of the Tulsa Race Riot,” Clark-Adams remembers. “And I had never heard or seen anything about it before. … I was mad for a number of reasons—one, that I had never heard of it.”

The 71-year-old Clark-Adams, who teaches sociology part time at Tulsa Community College, grew angrier when learning about the viciousness of the attacks on Black citizens. As an adult, she was able to handle that anger and frustration. But she believes there is a devastating emotional effect on young students if they feel important pieces of history have been hidden from them. She says hard history should be taught early in children’s schooling by skilled teachers.

Students can see the residual effects of what happened 100 years ago in North Tulsa’s Greenwood District, often called “Black Wall Street.” Residents note that the pain is still palpable there, and truth-telling must come before true healing and reconciliation can occur.

“The effects of the race massacre are still here in Tulsa,” says Akela Leach, a fifth grade teacher in Tulsa. “It’s still very visible. It’s still very segregated. And there’s still a huge difference between South Tulsa and North Tulsa, which is where Greenwood was located.”

Fallon Laine Dickson, a local business owner, moved to Tulsa with her family at a young age. She didn’t hear about the massacre until her 20s, when someone suggested they meet her at their office on “Black Wall Street.”

“I’m like, ‘Why don’t I know this area? I know a lot about Tulsa. I’ve been here since first grade,’” Dickson reflects. “By the time I looked up the address and [did] just a little quick Google search, I had found out about the community.”

While Greenwood rebounded and experienced prosperity by the 1940s, it was devastated again by an expressway cutting through the community. Once again, people lost homes and businesses in the name of “urban renewal.”

Dickson says that learning about the local history helps residents make sense of their environment and is a first step in repairing it.

She notes that when residents understand that history and realize their agency, they can positively affect the future of their community.

“Our dollars helped the economic growth of the city,” she says, “and so we just get pushed out when we don’t know. When we’re uneducated, we get pushed out.”

Fortunately, Tulsa residents, including educators, are working to make sure that young people know their local history.

Students were completely engaged because they knew that they were learning something about themselves.

“It’s a little bit more than just the notion of getting history to stop repeating itself,” says Danielle Neves, deputy chief of academics at Tulsa Public Schools (TPS). “How do we leverage our history so that we make different choices, that we understand differently the impacts of decisions on communities, on people, on trajectories and on futures?” 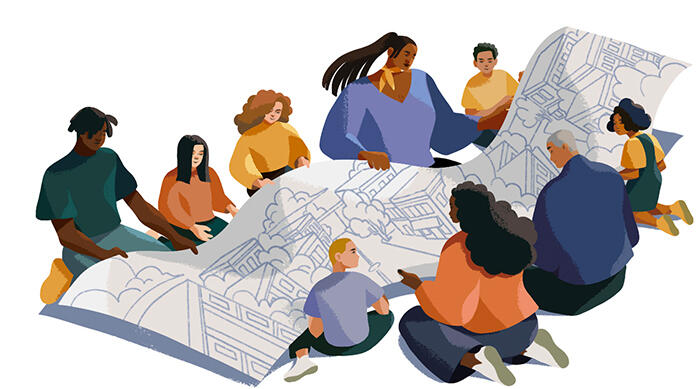 A New Curriculum in Tulsa

Neves notes that Oklahoma’s social studies standards have improved over the years, but more work should be done to center the experiences of historically marginalized people, particularly Black, Indigenous and Latinx people. Tulsa educators are working to fill in those gaps.

A new curriculum, developed by TPS educators, launched at the end of the 2020-2021 school year in alignment with the Tulsa Race Massacre Centennial observance.

Third through 12th grade students in social studies courses learned about the history and legacy of the Greenwood District, the massacre and its aftermath. With each year, students will learn a new layer about their city. Normally, Neves explains, stand-alone units would be introduced at different times throughout the year, depending on grade level. Since the initiative began with all teachers in these grades teaching the lessons at the same time, grade-level teams across the district came together to talk about how it went.

Leach, a Tulsa native, helped develop lessons for third through fifth grades and trained other teachers. She first learned about the massacre at her church as a child, but she did not learn much about it in school. Today, her students and others throughout the district will get a fuller picture of what happened in Tulsa.

“For many of our students in TPS, they live near Greenwood, or they go to school near Greenwood or they have gone to Juneteenth in Greenwood,” Leach says. “Students were completely engaged because they knew that they were learning something about themselves.”

With the new curriculum, starting in third grade, teachers introduce new vocabulary and concepts for students before diving into lessons. They also have access to picture books on Tulsa, primary sources and age-appropriate videos that help them make sense of segregation and discrimination.

“By fifth grade, they are very articulate in being able to explain what is happening,” Leach says.

The focus isn’t on the 1921 event itself. Teachers give students some context first. For example, in fifth grade, students spend time learning about all-Black towns in Oklahoma and why Black people viewed the state as the promised land. They then learn why Tulsa was segregated and about the vibrancy of Greenwood and its unique economic prosperity. After they learn about the massacre, they will learn how residents rebuilt their community.

By eighth grade, students will look more broadly at racial terror and can see Greenwood as just one example of what was happening in other places throughout the United States.

“We try to build it across the continuum,” Neves says. “So, what we didn’t want to have is seven, eight, nine years of students reciting what happened on May 31, 1921.”

Middle school and high school students delve deeper into the more traumatic events of the massacre, the effects of gentrification and reparations.

“They have a foundation of what Greenwood was before they even talk about that,” Leach explains.

While planning lessons, Leach says, educators were mindful of the culture of their classrooms. Each lesson has a “Before You Begin” section that prepares teachers to have critical conversations. Teachers also make space to listen and respond to students’ emotional reactions.

Preparing Teachers and Listening to Students 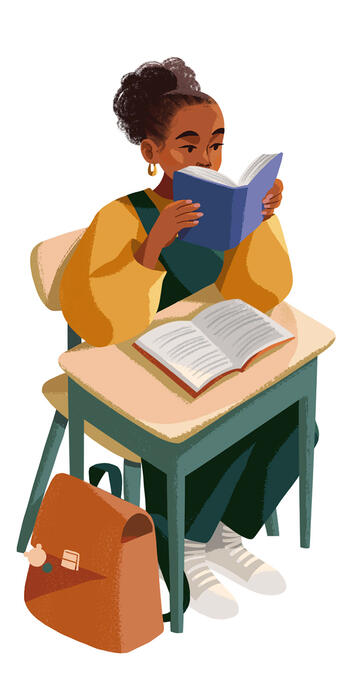 While some teachers felt they didn’t need this deep historical immersion, others were grateful for that opportunity. They were challenged to understand their own feelings about the ugly parts of the past.

“The point was to recognize [their feelings], whether that was for a white teacher’s fear of doing it wrong or for a Black teacher—especially a Black teacher whose family has lived in Tulsa for generations—feeling more anger and frustration about … the need for us to so actively have to bring this history into schools because it wasn’t always being taught,” Neves says. “It was a learning experience for all of us.”

At the end of the 2020-2021 school year, teachers conducted interviews and focus groups with some students across the district. Neves says this information gathering revealed that students are tuned in; they want to know more. And parents were pleased that their children were learning local history in a way that they hadn’t.

Before the launch, Neves says some parents expressed concern about the accuracy of the lessons. Some questioned the number of people who died during the massacre. It’s an issue that’s long been debated locally as official records and firsthand witness accounts don’t match.

Regardless, parents approved of teachers diving into the history.

“It was more a question of some parents being concerned about whether or not the history would be taught objectively and with as much historical accuracy as can exist and not to be leveraged as a way to tell, in their words, a different history of Tulsa,” Neves recalls.

These conversations have opened students’ minds to other histories, too. They also want to learn more about Indigenous peoples and cultures and better understand the relationship between Indigenous and Black people in Oklahoma. After listening to students, Neves says educators will put the same efforts into these histories as they did with the Tulsa Race Massacre curriculum.

“When we are diving into topics that we already know our students are interested in,” Neves explains, “it allows us to empower them, to make sense of this hard history in ways that will impact what they’re doing today and what they’ll do in the future.”

It takes an entire community to uplift uncomfortable, buried local history. While there is movement in Tulsa, some residents are still wary about the future of their city.

Pushback against this kind of education is inevitable. But the work Tulsa teachers are doing around the massacre is critical in a time when some residents believe there is still a “conspiracy of silence” by those in power.

“They did a fantastic job of covering up this history for almost a hundred years, and they’re trying to do it again,” Vivian Clark-Adams says. “We’ve got a number of monuments dealing with Black Wall Street and its resilience, so it’s not like we can completely erase it again. But there is that attempt.”

Educators say there is a role for parents and caregivers in helping their children learn about local history. TPS shares resources in weekly messages to families. And Tulsa Race Massacre lessons are also published on a district website.

“We believe that families are a child’s first and primary teachers, and we always want to provide them with resources to support learning at home,” Neves says. “We encourage families to talk with their children about what they are learning at school and to leverage community resources to learn more.”

Meanwhile, there are groups of Tulsans with an entrepreneurial spirit who are finding ways to improve economic conditions in North Tulsa while keeping its history alive. As with all movements, it’ll take some time to see substantial change.

Educators believe that change is possible with a young population who knows their community’s story.

“There are so many passionate educators who recognize that our students are going to need some skill sets that we might not have needed growing up at a different time, and that if they’re going to be successful—in our increasingly diverse society—then we’ve got to equip them with the tools to do that,” Neves says.

“I deeply believe that the ability to grapple with hard history and come out with a vision for the future that you feel like you could be part of is one of the best ways for us to do that.”

Coshandra Dillard
is a senior writer for Learning for Justice.
Add to a Learning Plan
X
Add to an Existing Learning Plan
START A NEW LEARNING PLAN
Print

Local history has a profound effect on our communities. It’s up to educators to learn and teach students about the hard history in their own backyards.
Coshandra Dillard
Bookmark This PageSave