Anatomy of an Ally

Teenagers in Arizona wear lettered T-shirts that together spell out a racial slur.

Transgender boys in a Wisconsin school are given detention after using the boys’ restroom.

Male students in a California high school create a “slut page” on Instagram featuring embarrassing photographs of their female peers.

In schools across the United States, students experience oppression based on their race, gender identity, religion, sexual orientation, socio-economic status, ability and other identities. Most educators care about the well-being of these students, but when young people are being targeted, caring isn’t enough. Ensuring all students feel respected and protected at school requires educators to become allies: partners in empowerment who speak out against injustice and support marginalized groups and individuals on their own terms. How can educators navigate the complexities of allyship in and out of the classroom? What does it take to become an effective ally?

In the past, being an ally in an educational setting was a role associated with white teachers doing anti-racism work. But allies exist across identity lines: Being an ally means recognizing oppression broadly and standing in solidarity with anyone who experiences oppression—whether or not the ally also belongs to a targeted group.

While any educator can become an ally, the journey might look different depending on identity, experience and familiarity with issues of power and privilege. This means there’s no blueprint; being effective requires significant self-reflection, according to Ali Michael of the University of Pennsylvania’s Center for the Study of Race and Equity in Education. “A teacher ally is someone who has a strong sense of their own identity, as well as the ways in which their own identities are either privileged or oppressed,” she says.

For Billy Travis, a second-year teacher at Center for Inquiry #27 in Indianapolis, becoming a teacher after leaving his first career in finance has been a journey of both professional and personal reflection. “In my old life, I never thought about privilege. But I knew I wasn’t making a difference in the world. I became a teacher because I wanted to do something that mattered,” he says.

Travis learned almost immediately that developing a sense of his own identity was vital to the process. “Whether or not I wanted it to be the case, my identity as a white male was present in the curriculum. There was a lot of tension in the relationship [with my students] early on, and sometimes there still is,” Travis says. “My students come from an experience that is totally different from mine. And even bigger than that, they were distrusting of me at first, which could make things really difficult. One day they were right next to me, and then, the next day, they shoved me away.”

Travis began the slow process of exploring who he was as an individual and how his identity differed from his students’. “The teacher’s identity journey is crucial in how he or she establishes relationships with students in the classroom,” says Sonia Nieto, professor emerita at the University of Massachusetts Amherst. “Investigating your identity through exploring your values, biases and blind spots helps establish who you are as a cultural being. Knowing these things about yourself will help you connect with your students. The more you can connect with students on a personal level, the better your students will see you as a person instead of someone with no real experiences.”

Travis’ commitment to learning about himself and his privilege has allowed him to better connect with students and positions him to be an effective ally. It still isn’t easy, but he feels optimistic about the process. “When you are trying to connect with students, there is a lot of work to be done,” he says. “You just have to dig in and be ready for it to be bumpy.”

Becoming an ally is a complex and ongoing process that requires courage and commitment. Whether advocating for marginalized students or supporting their fellow educators, teacher allies must accept the responsibility to focus unwaveringly on how power and privilege function in the school environment and beyond.

As teachers, we sometimes enter the profession because we want to change the world. ... But we need to remember that we can’t do it alone.

One important factor: Acknowledging personal privilege isn’t enough. “When trying to become a better ally, self-education should come first,” says Michael. There is always more to learn about different identity groups and about how others experience oppression; without this knowledge, expressions of allyship can ring hollow. Michael adds that it’s also up to allies to break institutional silences about poverty, race, sexual orientation or religion, for example, and begin professional discussions about language, pedagogy, diversity and bias. It can be uncomfortable, but discomfort is a necessary part of the work.

Unfortunately, discomfort isn’t the only barrier to being a long-term ally. Experienced teacher allies understand that the goal of ending oppression requires incremental change that can feel exhausting and overwhelming—especially if an ally also experiences oppression. Nieto encourages teacher allies to be patient with their students, their colleagues and themselves. “As teachers, we sometimes enter the profession because we want to change the world,” she says. “But we need to remember that we can’t do it alone.” 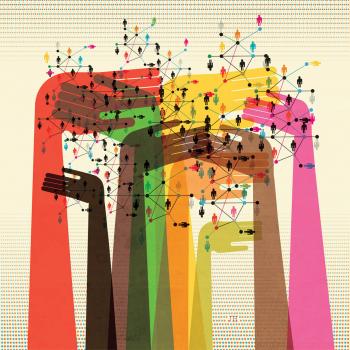 Allyship in the Classroom

Advocating for students and colleagues is a critical part of being an ally, but Michael points out that true allyship requires more than that. “If you’re a teacher ally, you don’t always have to be out in front,” she says. “You can be in the background working to bring forth the voices of those who are marginalized.” One way to do this is by exploring identity through pedagogy.

Casandra Alexander, an early childhood educator at PS 130 in Brooklyn, New York, believes teachers have a responsibility to create a world that affirms all students’ identities. Culturally responsive pedagogy does this by bringing multiple perspectives into every lesson. And because such pedagogy explores identity, it can help educators and students develop the skills and capacities to become allies while simultaneously challenging assumptions and biases.

“Our first unit of the year is all about who we are,” Alexander says. “Working alone and with their families, students create a project to present to the class that describes who they are, what their family looks like, … what they see themselves doing in the future and how they can help their community.” The result of such work, she says, is that not only does she get to know and appreciate her students, but they get to know and appreciate each other.

As a social studies teacher, Travis says he feels as if his most teachable moments come when he is able to use his subject area to discuss injustice with his students. For instance, Travis recently started a unit with his eighth-graders that asked them to use their personal experiences with racism as the starting point for a unit on the history of race in the United States. “At first, they didn’t even want to do it,” he says. “It was uncomfortable and emotional.”

Michael attributes that discomfort to students’ internalized “-isms.” In such a situation, she suggests giving students a safe forum for turning their frustrations into actions. That’s exactly what Travis did.

“We had to do a lot of low-stakes investigating,” he says. “But now they’re totally involved in the project. They are sharing their thoughts and feelings on an intellectual level, and it’s helping frame the discussion of how their experiences inform what happens to them outside of school.”

Nieto adds that, when facilitating discussions about identity, even small differences can go a long way when trying to establish relationships. She uses the example of a Spanish teacher she knows who made sure to include the language associated with living in both apartments and houses when leading a unit on “home.”

“Something as simple as acknowledging different living situations lets students know you’re aware that not everyone is the same,” Nieto says.

Allyship in the Hidden Curriculum

Many schools require teachers to stick to a set curriculum, but teacher allies seek extra-curricular opportunities to either challenge or validate the way students see the world and the way the world reacts to them. How adults in schools react to events like the T-shirt incident in Arizona or the “slut page” in California sends powerful messages about who stands with which students. Even in the absence of blatant bias, Travis is very aware that gaps and silences send messages to his students.

“There have been times when I felt pressured to ‘just teach the curriculum,’” Travis says. “Obviously, I realize that ‘just teaching the curriculum’ cheats my middle school students out of exploring the world through their eyes.”

For Alexander, her most teachable moments with pre-K students come when they are reading together on the carpet. “Sometimes I’ll ask my students about the characters in the story, which almost always leads to great discussions of race, gender, religion and family,” she says. “For instance, if a student describes a character in a story as boy or girl, we talk about language in the story that tells us whether or not the author actually identified the character as a boy or girl, or if we as readers made that assumption.” The main thing, she says, is to enter the curriculum with an open mind and listen deeply to what students have to say.

Michael agrees that the most successful teacher allies proactively listen, validate and—when possible—help students take action. “Being an ally becomes a lot less scary when you remember to frame it around how you’re allying against bigger forces of oppression,” she says. Highlighting identity and justice at school not only protects space for targeted students, it can breathe new life into what an educator teaches and inspire new ways to teach it—whether inside or outside the classroom.

Am I Doing It Right?

Even experienced allies aren’t always sure what to say or do. These reminders can keep you on the path to being a source of support and empowerment.

Do listen and ask how you can help.

Don’t expect another person to educate you about their identity.

Do accept criticism thoughtfully. Don’t broadcast your qualifications for being an ally.

Do speak up when you hear biased language.

Don’t apologize for the actions of your identity group.

Do seek support from experienced allies within your identity group.

Don’t expect credit for being an ally.

Don’t selectively support one group over another.

Use this toolkit to learn more about models of allyship!