A Different Kind of Pedagogy

Process drama, which encourages students to play with inquiry, brings content to life for students. Here’s how it looked in one high school classroom in Ohio.
Coshandra Dillard
Issue 62, Summer 2019
Illustration by Susan Estelle Kwas
Teach This in a Learning Plan
X
Add to an Existing Learning Plan
START A NEW LEARNING PLAN
Bookmark A Different Kind of Pedagogy
Print 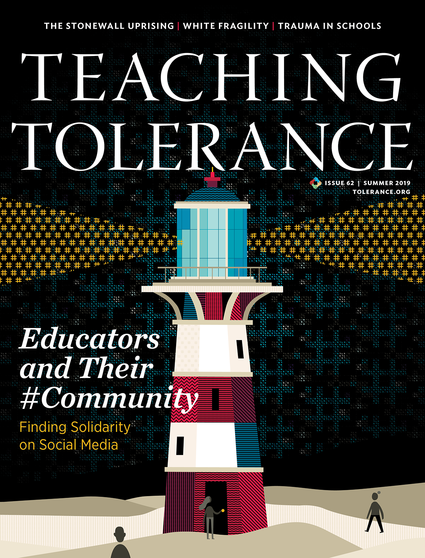 On a blisteringly cold day in rural northwestern Ohio, Kenton High School students file into Christina Cross’s government, politics and legal studies classes knowing that a visitor will be introducing them to something new.

Initially, there’s not much response to the news that they’ll be taking a break from a regular lecture. But sighs and subtle groans are soon replaced by robust discussion as the class works together to scrutinize the language and interpretation of the Eighth Amendment to the Constitution of the United States.

It’s one that most students don’t know offhand—most civics courses don’t spend a ton of time on the Eighth Amendment. But over the next two days, students in Cross’s class will be thinking and talking in new ways about the amendment guaranteeing that “excessive bail shall not be required, nor excessive fines imposed, nor cruel and unusual punishments inflicted.”

Cross, a practicing attorney, had wanted her students to delve into the amendments beyond the First and Second for quite a while. When she met Ohio Northern University Professor Kevin Cordi at an education conference, she was impressed by his presentation about incorporating process drama to teach about social justice. And she knew just how she wanted to use it.

She invited Cordi to bring the technique to her classroom.

In each of Cross’s five classes, Cordi asks students to imagine themselves as someone else for the activity that will follow.

Stepping into role-play, the students analyze the Eighth Amendment, working together to consider the topic from a range of different points of view. Cordi guides the process and provides context to inform students’ decisions as they consider what is cruel and what is unusual.

Process drama—or, as Cordi calls it, ensemble storytelling—isn’t theater, nor is it simulation. Students aren’t following a script or re-creating historical events or conditions. The path isn’t laid out; students develop it as they go. Process drama is a student-led exploration that builds on students’ own inquiry.

Cordi says the technique is popular in Europe but has yet to catch on in the United States. He draws inspiration from Dr. Brian Edmiston, a professor of drama in education at The Ohio State University, who has led workshops on process drama for teachers in the United States and abroad.

“You’re saying, ‘Let’s discover this together,’” Cordi says, explaining process drama. “‘All voices are listened to. We’ll question together, and collectively we’ll use drama and story to make meaning. We’re not looking for everyone to agree, but we’re looking for people to trouble and to investigate and interrogate.’”

Cordi offers a few different scenarios for students to work with. In several of Cross’s classes, the process drama is based on the real-life case of David Ford. One year into a 20-year sentence, Ford lost the teeth necessary to hold his partial dentures in place. His request for new dentures was denied, according to the Houston Chronicle, because “chewing is not considered a medical necessity” by the Texas Department of Criminal Justice. Instead, those incarcerated can request that their meals be blended and served to them in cups.

The question is clear: Is this policy a violation of the Eighth Amendment?

In Cross’s classroom, each table of students chooses a perspective they’ll take on. Some students volunteer for the role of corrections officers, incarcerated people or Ford himself. Cordi speaks as warden.

They dive deep into inquiry, considering both the practical and philosophical implications of the question. They ask about costs and alternatives to dentures. One student gets to the point immediately, stating that “no one should suffer in pain.”

Others argue that people who have committed no crime face barriers to health care, so why should the state pay for prisoners’ care? After all, it’s very costly, some students assert.

A classmate has an answer ready: “Three months with no intervention would cause more mental issues.”

“We’re dehumanizing prisoners,” another chimes in. 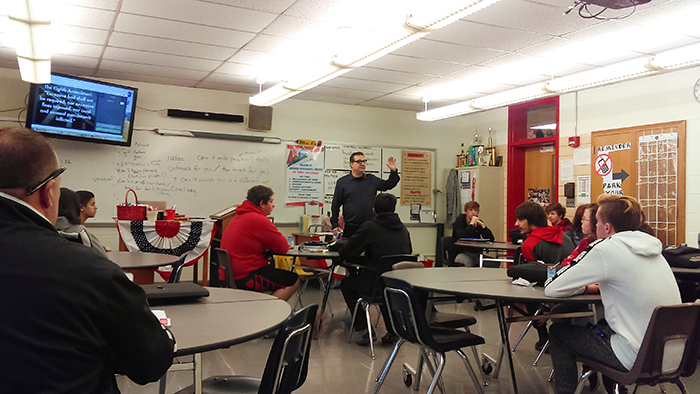 The process changes with each class, but the goal is always the same: Address the inquiry in a way that makes the meaning—and the stakes—of the question clear. Cordi says teachers shouldn’t expect a consensus. The goal isn’t to reach a single answer; it’s to help students open up to critical dialogue and discussion.

In one of the classes, Kenton High School Principal Chad Thrush sits in. Like Cross, Thrush believes that process drama gives students motivation to better understand and connect with complex ideas.

He suggests that the process works by tapping into “emotional energy that ... helps to create greater engagement.”

It also encourages students to challenge their assumptions and reflect on why they believe the things they do.

“The more you drill down, you start to realize that you believe that way because of a fundamental set of beliefs,” Thrush says.

Using process drama to drill into those beliefs can even be effective with younger students, Cordi says, “but you have to teach them at the level that they’re thinking.”

For example, the mediator can place elementary students in the “Jack and the Beanstalk” story, while high schoolers might use their imaginations to explore more complicated, real-world situations.

"Use Trouble to Make It Real"

Using process drama to dig into inquiry, especially when related to critical or challenging topics, requires teachers to plan for many outcomes.

“One of the things that I do, as what I call ‘story mediator,’ is that I use trouble to make it real,” Cordi explains.

One way process drama troubles fictional and real-world narratives is by building empathy. In Cross’s class, for example, it isn’t long before junior Austin Dunn breaks out of her role to express empathy for Ford. She explains that her father, too, suffers from failing teeth.

In response, Cordi also steps out of his character, acknowledging her experience before returning to the inquiry. Moments like these underscore the importance of listening deeply to the classroom community before, during and after the exercise. Cordi recommends that teachers provide numerous invitations to students to connect or reflect on the experience during all stages.

“As the mediator, I work so that we are comfortable to discuss freely, but if it gets too personal or emotional, I have many options offered to me including [to] change the fiction, alter the perspective, step in, step out, communicate by writing,” he says. He then expands the list to include “asking questions for clarity and even working to create new fiction.”

In Cross’s classes, students share their opinions, but they don’t feel the need to shout each other down. Given the degree to which civility—or lack thereof—is a topic of public discussion these days, faculty are pleased to see the exercise go smoothly.

To understand a lot of people’s issues, you have to walk a mile in their shoes first—the evidence, all the underlying causes. … So, the way he taught was engaging and it helped us out.

Cordi says that, too, is a goal of process drama: to understand that some decisions are difficult to make, to personalize situations and to open communication while acknowledging each other’s humanity.

“I think a lot of times I have to play the devil’s advocate, or I’m trying to push them to see another viewpoint,” Cross explains. “And for the first time, I saw students having a dialogue back and forth in a respectful [way], and a civil dialogue about different viewpoints. And it was OK to have different viewpoints.”

Thrush agrees, suggesting the technique could be utilized even more. “They’re learning good character education at the elementary school, but as they come up through middle school and high school, how are we helping to reinforce that?” he asks.

To ensure everyone’s voice is heard, Cordi begins each class by encouraging students to take a pledge: to give themselves permission to play, to take risks and make mistakes.

“Because I know stories connect us and I am connected to story,” he says, as students echo the sentiment back. “Let the stories begin!”

Process drama takes the pressure off students who worry about being wrong in their analysis or are generally too shy to speak up in class. When everyone has a voice and is participating, students are more likely to feel empowered. In Cross’s class, two students who are usually quiet contribute strong arguments once the pressure is off.

Participating student Riley Hershberger explains why. “If the teacher is talking about something and she’s asking everyone’s opinion and calling on people, then everyone’s kind of more focused on you,” she says. But in process drama, “they’re participating too. So, everyone is involved. Not just one person.”

Cordi says process drama helps educators suspend the idea that they’re the authority, so students are invited to teach as well as learn.

“Ask yourself: Do you want to talk at or talk with students?” he says. “The reason for the pedagogy to be here is growing, is expansive. … We forget that teachers are experts in their content area and with children. And that they themselves can play and learn together, which is the way education should be.”

It may take some practice to get comfortable using process drama in the classroom, but Kevin Cordi recommends the technique to all educators.

“My best advice is to breathe, give yourself permission to play, and reflect both with the class and afterward about it,” he says.

He suggests five steps you can use to get started.

Plan Ahead. Process drama does require some ahead-of-time preparation. Before you begin, consider contexts that could allow students to use drama and story to build an inquiry together. If you’re basing your process drama on a real-life context, as Cordi does, research the story thoroughly. Be ready with necessary background. Consider how you might need to scaffold the activity for students. And review your classroom agreements together to ensure all students are ready to respect the identities of both their classmates and the subjects of the process drama.

Start Small. You don’t need to begin with a multi-day inquiry. Try a simple social imagination activity that lets students practice empathy as they work toward inquiry. An activity like “Readers’ Theater” can be used as a starting point for imaginative inquiry, but it is a different dramatic form than process drama. And an exercise like “What Would They Say?” uses texts that can also lead to inquiry.

Allow Time for Reflection. What makes this work personal and valuable is how you as the teacher or story mediator adapt instruction to answer the inquiry of the students. Build time into the activity for making meaning with students. And allow time afterward for processing—both for yourself and with students.

Breathe. Give yourself and your students “permission to play.” Set the expectation that mistakes will be made, that ideas will be refined and that opinions will change over the course of the inquiry.

Repeat. Process drama only improves with time—the more your students practice the method, the more easily they’ll be able to slip into ensemble storytelling as a mode of inquiry. Remember that process drama isn’t a performance; it’s a tool. This method is just another lens for exploring and understanding ideas.

Dillard is a staff writer for Teaching Tolerance.