Crocodile and Ghost Bat Have a Hullabaloo: An Australian Tale of Name-Calling

In the Dreamtime, all the animal tribes in the outback decided to go on a walkabout. Red Kangaroo, always the most social, had arranged the entire thing.

“It will be a wonderful time for all of us to get to know each other better,” Red Kangaroo urged. “We can talk about our families, what we like to eat, where we like to live, and just have a lot of fun.” 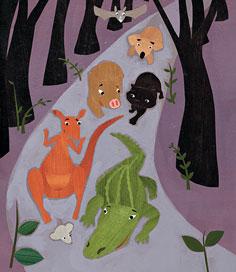 Red Kangaroo had a very difficult time getting everyone together because some animals liked the night and others liked the day. Finally, they agreed to meet at twilight, the time in between Day and Night.

It started innocently enough. Everyone had been quite nice to each other, getting along well when they stopped for a snack. Koala was chewing eucalyptus leaf salad, and Numbat was quite focused on a termite sandwich. And that’s when it happened.

Tasmanian Devil had volunteered to bring a nice stew. When Crocodile asked Ghost Bat to pass the stew, Ghost Bat didn’t hear her. Crocodile thought Ghost Bat was ignoring her on purpose, even after Ghost Bat apologized and said he honestly didn’t hear her ask for the stew. 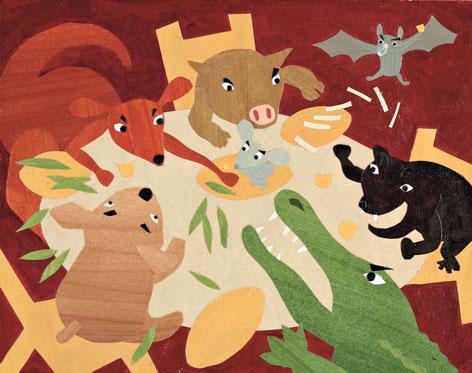 “Well I find that a little hard to believe,” Crocodile said under her breath, but loud enough for Ghost Bat--with his very large ears--to hear. Others heard, too.

Ghost Bat shot back, “Well at least I don’t let my food rot before I eat it.” Crocodile was furious. She had long fought against the rumor that crocodiles let their food rot before they eat it, and Ghost Bat knew it simply was not true.

“That’s just plain wrong, and you know it!” Crocodile yelled back.

Dibbler Mouse and Wombat took Ghost Bat’s side because they, too, had rather large ears. They chimed an old taunt from their childhood aimed at crocodiles: “Rotten food, rotten food, what you gonna feed your brood?”

Then everyone started screaming. Rock-wallaby was called “big foot” by Echidna, and so Rock-wallaby called Echidna a little “puggle.” Then Dingo heard someone say something about his dog-breath, and he started howling about how he’s not really a dog. So Dingo pushed Emu into a billabong because he thought she’d said it. It went on and on, with everyone calling everyone else names. Red Kangaroo did not know what to do.

And in the twilight of the Dreamtime, both the Day and the Night grew upset.

Looking down from far above, Walu, the sun, was very displeased at the brawl. She hid behind a cloud to keep from seeing the terrible way everyone was behaving.

Then Namarrkun, the lightning man, came out of the sky and made thunder by striking the clouds with the stone axes attached to his elbows and knees. Every time the animal tribes were quarreling, he hissed and crackled until they would stop. He even threw one of his fiery spears to earth to get their attention. That made them scurry into hiding where they’d be left alone to think about the unkind things they’d said to their friends.

And so every time you hear Namarrkun striking the clouds with his stone ax and throwing his fiery spears to the earth, you will know that somewhere someone is name-calling.