These are two different advertisements describing people who had escaped from slavery. They demonstrate the different treatment and valuation of enslaved people.
Author
M. Kelly and Thos. S. Scott
Grade Level
6-8 9-12
Teach This in a Learning Plan
X
Add to an Existing Learning Plan
START A NEW LEARNING PLAN
Bookmark “Runaways” and “$200 Reward”
Print

This text is part of the Teaching Hard History Text Library and aligns with Key Concepts 5 and 6. 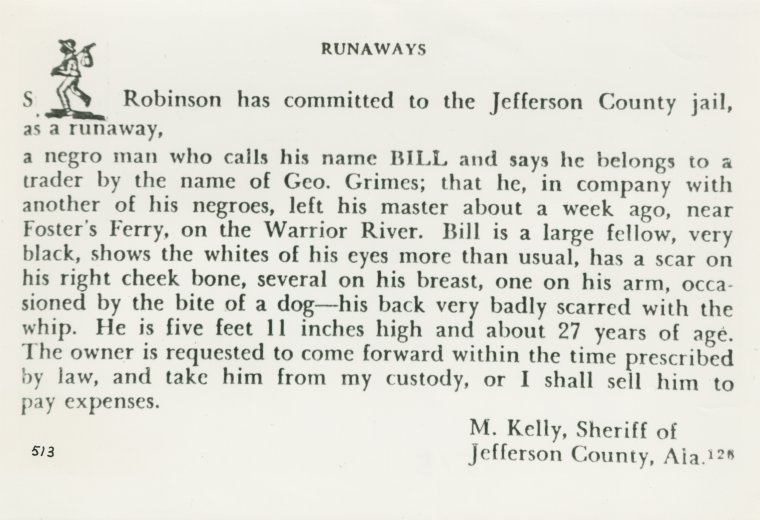 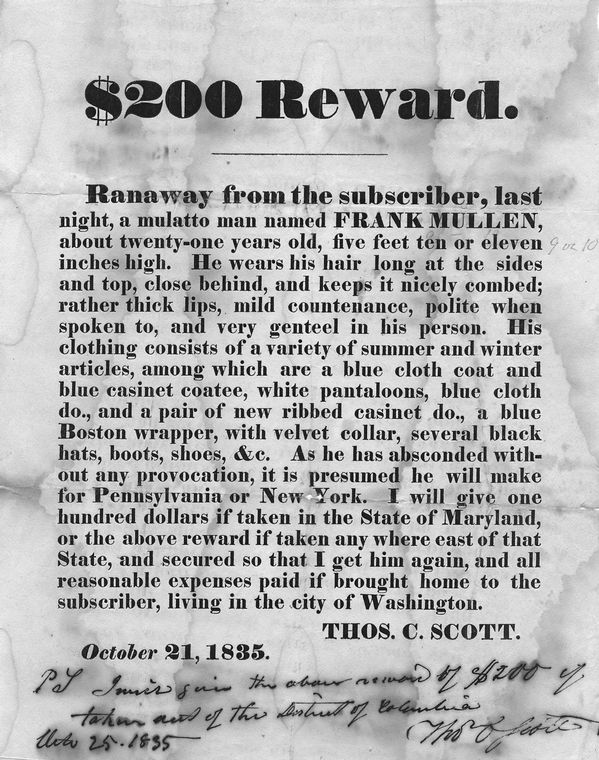 S. Robinson has committed to the Jefferson County jail, as a runaway, a negro man who calls himself Bill and says he belongs to a trader by the name of Geo. Grimes; that he, in company with another of his negroes, left his master about a week ago, near Foster’s Ferry, on the Warrior River. Bill is a large fellow, very black shows the whites of his eyes more than usual, has a scar on his right cheek bone, several on his breast, one on his arm, occasioned by the bite of a dog—his back very badly scarred with the whip. He is five feet 11 inches high and about 27 years of age. The ower is requested to come forward within the time prescribed by law, and take him from my custody, or I shall sell him to pay expenses.

Runaway from the subscriber, last night a mulatto man named Frank Mullen, about twenty-one years old, five feet ten or eleven inches hig. He wears his hair long at the sides and top, close behind, and keeps it nicely combed; rather thick lips, mild countenance, polite when spoken to, and very genteel in his person. His clothing consists of a variety of summer and winter articles, among which are a blue cloth coat and blue casinet coatee, white pantaloons, blue cloth do., and a pair of new ribbed casinet do., a blue Boston wrapper, with velvet collar, several black hats, boots, shoes, &c. As he has absconded without any provocation, it is presumed he will make for Pennsylvania or New York. I will give one hundred dollars if taken in the State of Maryland, or the above reward if taken anywhere east of that State, and secured so that I get him again, and all reasonable expenses paid if brought home to the subscriber, living in the city of Washington.

Source
This text is in the public domain. Retrieved from https://digitalcollections.nypl.org/items/83d5559f-0fc9-aaa1-e040-e00a1806332d and https://digitalcollections.nypl.org/items/510d47df-a261-a3d9-e040-e00a18064a99.
Text Dependent Questions
Reveal Answers
Teach This in a Learning Plan
X
Add to an Existing Learning Plan
START A NEW LEARNING PLAN
Print