The Fugitive Slave Bill of 1850 expanded the rights of persons who participated in capturing a person alleged to have escaped enslavement. It provided incentives not only for the persons involved in the capturing, but also for the judicial authorities involved in the process. The bill also established penalties for any person who impeded this process and narrowed the rights of any person alleged to have escaped slavery.
Author
United States Congress
Grade Level
9-12
Teach This in a Learning Plan
X
Add to an Existing Learning Plan
START A NEW LEARNING PLAN
Bookmark The Fugitive Slave Bill
Print

This text is part of the Teaching Hard History Text Library and aligns with Key Concepts 4 and 8. 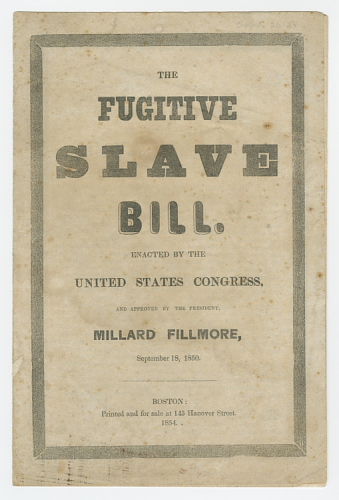 SECT. 7. And be it further enacted, That any person who shall knowingly and willingly obstruct, hinder, or prevent such claimant, his Agent or Attorney, or any person or persons lawfully assisting him, her, or them, from arresting such a Fugitive from service or labor, either with or without process as aforesaid; or shall rescue, or attempt to rescue, such Fugitive from service or labor, or from the custody of the claimant, his or her Agent or Attorney, or other person or persons lawfully assisting as aforesaid, when so arrested, pursuant to the authority herein given and declared; … or shall harbor or conceal such Fugitive, so as to prevent the discovery and arrest of such person, after notice or knowledge of the fact that such person was a Fugitive from service or labor as aforesaid, shall, for either of said offences, be subject to a fine not exceeding one thousand dollars, and imprisonment not exceeding six months, by indictment and conviction before the District Court of the United States for the District in which such offence may have been committed, or before the proper Court of criminal jurisdiction, if committed within any one of the organized Territories of the United States; and shall moreover forfeit and pay, by way of civil damages to the party injured by such illegal conduct, the sum of one thousand dollars for each Fugitive so lost as aforesaid, to be recovered by action of debt in any of the District or Territorial Courts aforesaid, within whose jurisdiction the said offence may have been committed.

SECT. 8. And be it further enacted, That the Marshals, their Deputies, and the Clerks of the said Districts or Territorial Courts, shall be paid for their services the like fees as may be allowed to them for similar services in other cases; and where such services are rendered exclusively in the arrest, custody, and delivery of the Fugitive to the claimant, his or her Agent or Attorney, or where such supposed Fugitive may be discharged out of custody from the want of sufficient proof as aforesaid, then such fees are to be paid in the whole by such complainant, his Agent or Attorney; and in all cases where the proceedings are before a Commissioner, he shall be entitled to a fee of ten dollars in full for his services in each case, upon the delivery of the said certificate to the claimant, his or her Agent or Attorney; or a fee of five dollars in cases where proof shall not, in the opinion of such Commissioner, warrant such certificate and delivery, inclusive of all services incident to such arrest and examination, to be paid, in either case, by the claimant, his or her Agent or Attorney. The person or persons authorized to execute the process to be issued by such Commissioners for the arrest and detention of Fugitives from service or labor as aforesaid, shall also be entitled to a fee of five dollars each for each person he or they may arrest and take before any such Commissioner as aforesaid, at the instance and request of such claimant, with such other fees as may be deemed reasonable by such Commissioner for such other additional services as may be necessarily performed by him or them.

Source
This text is in the public domain. Retrieved from https://nmaahc.si.edu/object/nmaahc_2012.46.5.
Text Dependent Questions
Reveal Answers
Teach This in a Learning Plan
X
Add to an Existing Learning Plan
START A NEW LEARNING PLAN
Print